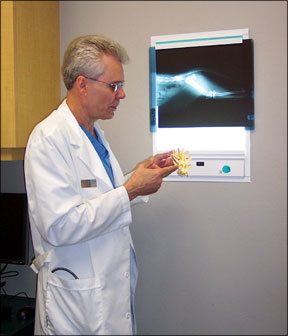 Thanks to advances in veterinary medicine, many of the cancers to which cats are susceptible are now controllable, sometimes curable, and even (in the case of mammary cancer, for example) potentially preventable. This does not always hold true, however,

for osteosarcoma, a highly destructive feline bone cancer for which there is no known cure unless it is detected early.

Once osteosarcoma has invaded a cats body, the best that the animals owner can hope for is early diagnosis and management of the disease. If the cancer is confined to a limited area of an affected cats body, successful treatment will almost always involve surgical excision – the amputation of a leg, for example, or the removal of a part of the animals jawbone – in which case the cat may go on living for years. But if osteosarcoma remains undetected and progresses to the point where surgery is not an option, the cat will be unlikely to survive for more than a few months.

Fortunately, feline osteosarcoma is relatively uncommon, according to Margaret McEntee, DVM, an associate professor of oncology at Cornell Universitys College of Veterinary Medicine who is board-certified by both the American College of Veterinary Internal Medicine and the American College of Veterinary Radiology. “This type of tumor represents only about two percent to three percent of the cancers that we see in cats,” she says. “All breeds are at risk, although this cancer seems to occur with increased frequency in domestic shorthairs. For unknown reasons, it rarely occurs in Persians. Cats of all ages can get it, but most patients are older – between nine and 10 years of age or so.”

Osteosarcoma can occur in the axial skeleton, which includes the bones of an animals skull, spine, pelvis and ribs, but it is more frequently observed in the appendicular skeleton, which includes the bones of the limbs. “In cats,” says Dr. McEntee, “the cancerous tumors tend to occur more commonly in the bones of the hind legs – the tibia and femur.” The clinical signs that a tumor is developing in a leg include lameness, swelling and limited motion. In some cases, the involved bone in the leg can break because of tumor growth that has caused extensive local bone destruction. If such significant damage has occurred, she says, it is likely that the cancer has been developing for an extended period of time.

When osteosarcoma affects the axial skeleton, it most often appears in the bones of the skull, the upper jaw (maxilla) or the lower jaw (mandible). If the cancer is in the skull or spine, the affected animal may exhibit neurologic problems, such as trouble with its sense of balance. The most obvious sign of jaw involvement is difficulty in eating.

After undergoing a thorough physical examination – an initial evaluation that would include a complete blood count and blood chemistry screening – a cat showing otherwise unexplained swelling of a leg or other indication that it may be harboring osteosarcoma would typically be examined radiographically. Says Dr. McEntee: “An X-ray would show us whether there is bone destruction or abnormal bone development. This would give us a good idea that osteosarcoma might be present. But a definitive, confirming diagnosis can only be achieved by means of a core needle biopsy, a procedure in which bone tissue is removed and submitted to a veterinary pathologist for histopathologic examination under a microscope.”

If osteosarcoma in a leg bone is diagnosed, she says, treatment will be initiated immediately – and this will typically involve amputation of the affected limb. A core biopsy requires that a cat be placed under anesthesia, and in some cases, Dr. McEntee notes, amputation may even be advisable when the presence of osteosarcoma is strongly suspected but has not been conclusively established.

Cats get along very well on three legs, she points out, and amputating one of them – as long as it is done before a tumor has spread beyond the limb – offers the likelihood of long-term survival and possibly a total removal of the disease from the animals body. Indeed, says Dr. McEntee, a cat with osteosarcoma that undergoes a leg amputation may have a survival time of two to five years following a procedure that removes all of the cancerous cells from its body. “If we were to try other treatment approaches, such as chemotherapy or radiation for osteosarcoma of a limb,” she notes, “it is unlikely that we could achieve that same level of control, and the cats survival would probably be less than six months.”

Osteosarcoma in other parts of the feline body – the jaw, for example – is comparatively uncommon, she points out. Treatment for such a cancer would rely on surgery if the tumor is detected early or on combination therapy – employing both chemotherapy and radiation – in more advanced cases. With such treatment, says Dr. McEntee, a treated cat could possibly survive for “some amount of time” afterwards, although there is limited information available regarding outcomes following treatment of this infrequently observed type of cancer.

Given the deadly severity of osteosarcoma and the importance of early detection, she advises owners to examine their animals periodically for any unusual swelling of legs or suspicious lumps on the jaw or skull and to report any such signs to a veterinarian. “Also,” she says, “report any changes in your cats gait as soon as you notice them.”