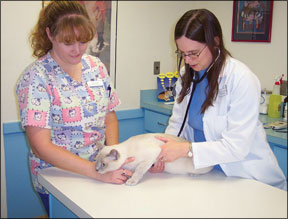 If you have your female cat spayed at an early age, you will, of course, be preventing her from experiencing motherhood. Nevertheless, youd be wise to have her undergo the procedure, since youll also be dramatically lessening the chances that she will be afflicted with mammary cancer later in her life (not to mention helping to curb feline overpopulation). Indeed, says Margaret McEntee, DVM, an associate professor of oncology at

Cornell Universitys College of Veterinary Medicine, having your cat spayed at six months of age will reduce her chances of getting mammary cancer by about 90 percent.

Cancer in general afflicts an estimated 30 percent to 40 percent of all cats, and one-third or so of these are mammary gland cancers. It is the third most common type of feline cancer after lymphoma and skin cancer; it occurs most frequently in cats older than 10 and more than 95 percent of the time in female cats.

According to Dr. McEntee, the great majority of mammary cancers – approximately 85 percent – are lethally malignant adenocarcinomas. These growths originate in the epithelial tissue of a gland beneath a nipple and eventually spread (metastasize) to the lymph nodes, lungs, pleura, liver, adrenal gland, kidney or other parts of the body.

But a mammary tumor doesnt have to be malignant in order to imperil a cats life. It can pose a severe threat even at its site of origin. That is, if a nonmalignant tumor develops below a cats nipple, it can stretch the skin at the top of the mass. And this can eventually result in an ulceration that breaks through the surface of the skin, bleeds and becomes vulnerable to serious systemic bacterial infection.

A cat has two parallel “chains” of four mammary glands and nipples running the length of its belly. “A tumor can start as a small, firm nodule, about the size of a BB, just beneath or next to a nipple,” explains Dr. McEntee. “It can become fixed and enlarge at its point of origin, but in most cases, the tumor of an affected cat will also spread to the lymph nodes and then to other parts of its body. In its initial stage, when the growth is small, its not going to be painful and there will be no obvious clinical signs. So until you can actually feel the growth, youre not going to know its there.” The length of time it takes for a tumor to spread out of control is variable, says Dr. McEntee. “It may develop for weeks or months before it is noticed.”

The underlying cause or causes of feline mammary cancer are unknown. Genetic influence has not yet been found to play a role. Likewise, while links between external cancer-causing agents – such as environmental carcinogens, exposure to sunlight, viruses and vaccine injections – have been established in relation to various other feline cancers, these factors do not appear relevant to the onset of mammary cancer in cats.

On the other hand, says Dr. McEntee, the hormone status of a female cat is significant – specifically the roles played by the two female reproductive hormones, estrogen and progesterone. “If these hormones are given to unspayed cats as contraceptives or for behavior modification either orally or by injection,” she notes, “their risk of mammary cancer can triple.”

A cats breed may also play a role. For example, says Dr. McEntee, “Siamese cats, for unknown reasons, have twice the risk of other breeds, and they also tend to get the cancer at an earlier age, although this risk levels off at the age of nine years or so.” In general, she adds, the average age of cats with mammary cancer is between 10 and 12 years, although it can affect animals anywhere from less than a year old to 20 years of age or older.

Definitive diagnosis of mammary cancer is usually achieved by removing a portion of affected tissue – or all of it, if possible – and submitting the sample for histopathologic examination, which will determine whether the cancer is benign or malignant. “Well also use chest X-rays and abdominal ultrasound imaging,” says Dr. McEntee, “to see whether the mammary mass has spread to the lymph nodes and then to the internal organs.”

If the cancer has spread, treatment will center on chemotherapy. But if the tissue involvement is confined to the mammary glands, however, mastectomy will be performed to remove either one or both chains of the patients nipples, mammary glands, and underlying tissue. “If caught early,” says Dr. McEntee, “the survival chances are very good – three years or more if a tumor is smaller than two centimeters in diameter.”

To dramatically reduce the risk of feline mammary cancer, Dr. McEntee urges owners to have their female cats spayed by six months of age. In addition, owners should routinely palpate their animals mammary glands and nipples in order to detect any unusual lumps. And she strongly recommends that all cats undergo thorough physical examination twice each year after they reach six or seven years of age.