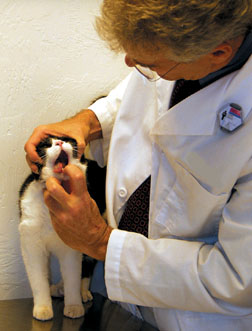 Rhinotracheitis. Panleukopenia. Calicivirus. Although these words may sound like names of dinosaurs, they describe entities on the opposite end of the size scale – microscopic organisms that cause a variety of disease signs and test your cats immune system. Vaccines prime the immune system to respond to viral antigens and prepare it to wage war against future virus attacks, helping your cat to fight off infection.

Feline calicivirus (FCV) infection primarily affects your cats upper respiratory tract and causes runny eyes, stuffed-up nose and sneezing. Cats living in shelters or colonies are more susceptible to calicivirus infections than indoor cats in single-cat environments. The calicivirus, however, changes at such a rate that it is difficult for protective vaccines to keep up.

Calicivirus is not a single entity, but a complex of highly variable viruses. Calicivirus is a whole population of viruses that differ from one to the other, says John Parker, BVMS, PhD, an assistant professor of virology at Cornell University. Theres a high level of genetic diversity in the virus, says Dr. Parker. They evolve and change their nature.

A Potential Killer
Several virulent strains of calicivirus have recently appeared among the outdoor cat population. One is FCV5, which infected an isolated New England cat colony with the result that 40 percent of of the cats died. Some of the newer strains cause ulcerations, facial edema, high fever, pancreatitis and lethargy.

Available vaccines do not always protect cats and may be ineffective if the cat already has calicivirus or contracts a new strain. Because feline calicivirus is a model for human calicivirus and for calicivirus in general, it has received renewed attention.

In studies supported by the Cornell Feline Health Center, Dr. Parker and researchers at the James A. Baker Institute for Animal Health at Cornell University study some of the more virulent strains to help understand how calicivirus grows and attaches (or binds) to the cells. Were doing infection studies in cells grown in the laboratory to identify the difference between the newer virulent strains and the vaccine strain, says Dr. Parker. If you can block it, you can stop the infection.

So Why Bother?
With new calicivirus strains developing constantly, its impossible for vaccines to be developed quickly enough to protect against all possible strains of the virus. Cat owners may question the need for obtaining calicivirus vaccinations at all.

But currently available vaccines induce a degree of protection against many of the strains of calicivirus to which cats may be naturally exposed, so vaccination remains extremely important.

But as an additional means of protection, you can reduce the likelihood of exposure to feline calicivirus by keeping your cat indoors (but avoiding overcrowding), and away from other cats whose health status is questionable.