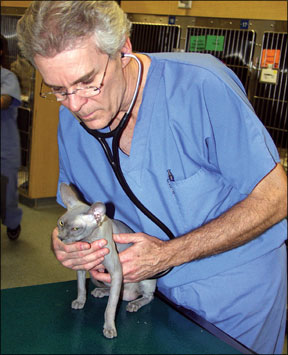 Humane considerations overwhelmingly support the practice of spaying – the surgical removal of a female cats ovaries and uterus – when an animal is about six months of age. Perhaps the most compelling argument in favor of this procedure (also known as ovariohysterectomy) is the reduction of feline overpopulation – the birth of unwanted kittens that are either abandoned or

relegated to animal shelters and a miserable existence that is often relieved only through euthanasia. One study has found that 85 percent of cats that are dropped off at shelters are eventually destroyed. It is estimated that as many as three to four million unwanted cats and kittens are put to sleep annually in the U.S.

But cats that are loved and well-cared-for by their owners are also likely to benefit significantly from spaying during kittenhood. The procedure will, for example, preclude a young females development of mammary tissue and thus reduce by about 90 percent her chances of developing mammary cancer later in life. And because spaying entails removal of the uterus, the procedure virtually eliminates the possibility that a female cat will ever develop a condition called pyometra – a potentially fatal disorder in which a pus-filled uterus becomes grossly distended, and, if unrelieved, apt to burst.

According to Michelle Kutzler, DVM, PhD, an assistant professor of clinical sciences at Oregon State Universitys College of Veterinary Medicine, pyometra is the result of infection by opportunistic bacteria that migrate from the vagina to the uterus and colonize there. Understanding this lethal condition requires a general knowledge of the intact feline reproductive apparatus and the interaction between its physical constituents and the various hormones that influence its activity.

In almost every respect, the anatomy of the feline reproductive system corresponds to that of humans. Its major components include: the vulva (the external genital structure that serves as the entrance to the vagina); the vagina (the narrow passageway leading from the vulva to the cervix, the opening through which male sperm is transported to the uterus); the ovaries (two small organs that produce the eggs – or ova – along with various hormones that are crucial in the reproductive process); the fallopian tubes (the site of fertilization and early embryonic development); and the uterus (an organ in the pelvic cavity in which fertilized ova mature).

“The main anatomic difference between the human and feline reproductive systems, Dr. Kutzler points out, “is that a female cats uterus is Y-shaped, whereas the human uterus is pear-shaped.” The two long arms of the Y – called “horns” – extend from each ovary, she explains, and join at the short stem of the Y, which is the uterine body. “This seems to be an evolutionary advantage,” says Dr. Kutzler, “since cats are litter-bearing animals and the linear components of the Y-shape increase the surface area for placental contact and nourishing.”

Uterine tissue comprises three layers, she explains. An outer layer (serosa) is a thin, slippery tissue that interfaces with the kidneys, intestines and other abdominal structures. The middle layer (the myometrium) is the thickest layer, consisting of two kinds of muscle that, she says, “contract and expand longitudinally and circumferentially as needed to help move a kitten out of the uterus during birthing.” The inner layer (the endometrium) serves as the internal lining of the uterus and provides a suitable environment for the development of fertilized ova.

When an intact female cat reaches puberty, she will begin her estrous cycles, commonly known as periods of “heat.” An animal will typically go into heat for about a week and will then go out of heat for about two weeks. If she mates and ovulation occurs, a hormone called progesterone, which thickens the endometrium and prepares it for pregnancy, is secreted by the ovary.

Over time, the endometrial tissue of female cats that have repeatedly ovulated without becoming pregnant will increase in size and thickness due to the long-term effect of the progesterone; the pores in the tissue will become clogged and will form cysts; and the progesterone secretion, which suppresses the immune system during pregnancy, will make the uterus vulnerable to bacterial infection. This condition – called cystic endometrial hyperplasia (CEH) – sets the stage for pyometra. Indeed, says Dr. Kutzler, “You must have CEH in order for pyometra to occur.”

With the animals natural defense mechanisms impaired, bacteria that naturally reside in the vaginal tract can migrate and proliferate within the uterus. “The most common of these,” Dr. Kutzler notes, “is E. coli, which can be very harmful. These bacteria stay localized within the uterus, but they produce toxins that are released into an animals bloodstream and circulate throughout its body. The cat will develop antibodies to the toxins, and the effect can seriously interfere with kidney function and can progress to kidney failure.”

More characteristically, however, the presence of uterine bacteria will prompt the release of white blood cells to the organs interior and a consequent buildup of pus that can swell the uterus to the bursting point. If untreated, pyometra is likely to be fatal if the uterus ruptures and toxins are spilled into the abdomen.

Physical examination, patient history and X-rays may be sufficient to achieve a definitive diagnosis of pyometra, although ultrasound imaging may sometimes be necessary. In some cases, the disorder may be treated medically, says Dr. Kutzler, relying on hormone therapy aimed toward causing the uterus to contract and the cervix to open, which would allow the accumulated pus to drain via the vaginal canal. This treatment option, she points out, is used primarily in cases involving especially valuable cats whose owners are determined to preserve their animals breeding potential. But in 99 percent of cases, the condition will be treated surgically in an operation that is, in essence, a spay procedure.

She points out, however, that the surgical procedure is apt to be lengthy and very delicate. “You have to keep in mind,” she says, “that the patient is toxic and very weak and could die from the anesthesia alone. Youve got to be careful so that this pus-filled organ doesnt explode while youre working to detach it.” Also of concern is the fact that the swollen uterus is putting pressure on the patients entire circulatory system, and the abrupt removal of the organ can cause a dramatic drop in blood pressure. Says Dr. Kutzler: “Ive seen a seven-pound cat lose one-third of her body weight – just like that!”