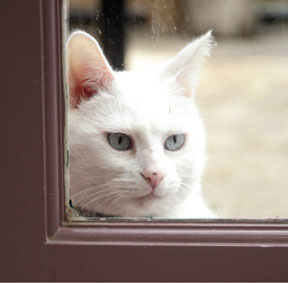 Thanks to advances in all fields of veterinary medicine, it is not uncommon these days for a cat to live to the very ripe old age of 20 – roughly the physiologic equivalent of age 93 in a human. Thats the good news.

The bad news is that cats, like humans, become increasingly susceptible to age-related disease conditions as they grow old, and most of these disorders are bound to have an effect on an animals behavior. Arthritis, for example, is likely to cause a formerly rambunctious cat to slow down dramatically as it transitions through its so-called golden years; kidney and urinary tract disease may severely affect its litter box behavior; progressive periodontal disease and tooth loss may alter its eating habits; and progressive hearing problems may make a cat decreasingly responsive to its environment.

In some cases, however, an elderly cats behavioral peculiarities will, despite thorough veterinary examination and laboratory testing, remain unattributable to any underlying disease condition. In such a case, the animal is apt to be diagnosed as “senile,” a vague term used to describe an animal that exhibits physiologically inexplicable cognitive dysfunction, the outward signs of which somewhat resemble those associated with age-related dementia and Alzheimers disease in humans.

Feline senility is by no means uncommon. Indeed, one study has shown that as many as 80 percent of cats over the age of 16 show signs of the condition, with changes in their brains, detected in post mortem examinations, revealing the same type of tangled fibers (beta amyloid plaques) that are seen in the brains of humans with Alzheimers disease and senile dementia.

The clinical signs of feline senility, which can become noticeable in cats as young as 10 years of age, vary from animal to animal and are not exclusively associated with age-related dementia. They include spatial disorientation; wandering in unfamiliar territory; diminished playfulness; excessive sleeping; shifting patterns in cycles of sleep and wakefulness; long periods of staring into space or at walls; indifference to food and water; sudden, prolonged and seemingly unprompted vocalization; and elimination outside the litter box.

According to Katherine Houpt, VMD, PhD, the most dramatic and most frequently reported behavioral indication of possible feline senility is an elderly cats persistent vocalization during the night. “They howl and screech constantly between midnight and dawn,” says Dr. Houpt, who is the James Law Professor of Animal Behavior and director of the Behavior Clinic at Cornell Universitys College of Veterinary Medicine. “Thats the behavior that owners complain most about. People wouldnt mind if a cat was just active at night. But the constant yowling and caterwauling keeps them awake, and thats why we hear about it so often.”

Why would this strange vocalizing behavior occur in elderly cats that have no apparent underlying health issue, like hyperthyroidism? “Its probably anxiety,” Dr. Houpt surmises. “There may be something like the fear of death at the base of it. They dont feel quite right, and they cant do anything about it. We dont know why this occurs at night, but thats when old dogs and, for that matter, old people also become anxious.”

Another behavioral indication that may, in the absence of an underlying disease, be considered a sign of senility is a change in the animals socializing patterns. “Certainly,” says Dr. Houpt, “they do tend to withdraw from other cats. For instance, a cat that may have always slept with another cat may stop doing that. On the other hand, while senile dogs tend to become less affectionate with their owners, old cats usually become more affectionate.” As they age, she points out, they tend to become increasingly “clingy,” increasingly willing to lie purring in an owners lap for extended periods of time.

Erratic litter box behavior is a confusing issue, says Dr. Houpt, because it often occurs in geriatric cats with diagnosed diseases as well as in those for which this behavior may be a sign of senility. “House-soiling due to cognitive dysfunction in old cats almost always involves defecation,” she points out. “Theyll often go to their box to urinate, and theyll accomplish that. But then theyll defecate outside the box – right next to it, in fact. We dont know why they do this. Obviously, its not an arthritic problem, since theyre perfectly able to get into the box to urinate.”

It may be presumed that older cats, like humans, can experience a decline in their mental processes due to age-related degeneration of their brain tissue. But feline senility remains largely a mystery. While an old cat may show signs of confusion, lack of coordination, and odd behavior, there is no way objectively to assess a decline in its cognitive functions – that is, there are no standards comparable to those that are used for assessing creativity and the use of language as a means of diagnosing human cognitive dysfunction.

“The problem,” says Dr. Houpt, “is that we dont train cats to do anything. Probably the only cognition problem that a cat owner would pick up would be an animals inability to find its food dish. And this, of course, could simply be due to a lack of perception. Maybe the old cats eyesight is weak. Or if it doesnt respond to you, maybe thats because it cant really hear you anymore.”

All breeds are at risk for feline senility, says Dr. Houpt, males and females equally. “Indoor cats are more susceptible,” she notes, “because outdoor cats dont usually reach the age of 15 or so, when the signs of senility generally start to be noticed. They tend to die much younger as the result of being hit by cars, getting infected with fatal diseases, fighting with other cats or being attacked by dogs, coyotes and other animals.”

A genetic predisposition for senility may exist, she adds, “But we are only able to study that possibility in purebred cats with a family history, and we havent had enough cases to determine whether genes do or do not play a role.”

Certain measures might help prevent or delay the onset of senility, says Dr. Houpt, while others will ease the discomfort of an already affected cat. For example, she suggests that cats 15 years of age and older be fed a diet rich in vitamin E, carnitine (a meat derivative) and antioxidants, substances that are known to retard the effects of aging. Such diets are readily available without a prescription.

“These substances seem to be protective and to some extent curative,” she says. “I would certainly feed them to an old cat as long as there is no medical reason for its having to be on a different kind of diet.”

Also, she advises, owners should try to reduce stress in an aging cats daily life. “Dont bring another cat or a dog into the household,” she says. “This can be very stressful during this period of an animals life.”

If the aging cat has trouble going up stairs or jumping onto a bed, she suggests providing a ramp to help the animal. And make sure that its litter box is readily accessible and that the animal can get in and out of it easily.

And, adds Dr. Houpt, give the old boy or girl a lot of affection. “Let it lie in your lap,” says Dr. Houpt, “and stroke it gently. That will often work to reduce its stress. If it doesnt like being petted, the cat will let you know.”