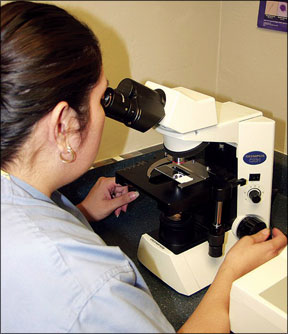 The last time Frannie, the ShortTakes office feline, had her annual exam, we asked about heartworm control. The vet said that, as long as Frannie continued to be a strictly indoor cat living in this region (upstate New York), heartworm medication

“probably isnt necessary.” But ask again when Frannie comes back in six months, the vet added, “because things might change.”

We had been thinking about the late Dr. Jim Richards, an outspoken crusader for heartworm protection – no matter where in the 50 states a cat might live. All it takes is one mosquito, biting a heartworm-infected dog – then passing the disease on to the next cat it bites – to cause HARD (heartworm-associated respiratory disease), Dr. Richards said again and again.

Even in a high-rise apartment in Detroit, just one spaghetti-like heartworm in the lungs can kill a cat without warning, Dr. Richards told Steve Dale, the syndicated columnist and radio host.

And things indeed have, as our vet predicted, changed. For one, Frannie escaped through the legs of a Halloween trick-or-treater, spending a couple nights on the lam in a record-warm and mosquito-infested October.

Then another heartworm expert, Clark E. Atkins, DVM, at North Carolina States veterinary college, changed his mind. Writing in the Journal of the American Veterinary Medical Association (Vol. 231, No. 9), Dr. Atkins said he is “Reassessing the Definition of Heartworm Infection in Cats.”

Besides “nonexposed (antibody-negative)” cats, there should be four other levels, he said. They range from “exposed cats being treated with heartworm preventive” and “exposed, subclinical” cats to “possibly clinically affected” cats and those with full-blown dirofilariasis, with mature heartworms in the lungs “and potentially many other organs.”

Are we confused yet? And when our vet says there is no known heartworm infection among cats in our neck of the woods, do we know what that means? Okay, Frannie, into the kitty carrier. Were going back to see the vet.

Something Else To Think About

MRSA (which is easier to say than methicillin-resistant Staphylococcus aureus) is turning up in cats. And humans – at least indirectly – may be to blame. A report in the same issue of JAVMA (Vol. 231, No. 9) traces an MRSA outbreak at the Ontario Veterinary Colleges clinic back to one so-called index case: a dog belonging to a paramedic who may – or may not, the Ontario vets emphasized – have passed MRSA from infected human patients to his dog. Before the outbreak was brought under control, at least two cats at the clinic in Guelph, Ontario, had MRSA, too.

All the more reason to heed the advice of the FDAs new “Safe Handling Tips for Pet Foods.” Before feeding the cat, for example, we should wash our hands for 20 seconds with soap and hot water.

Thanks to Veterinary Economics (Vol. 48, Issue 11) for noting a curious overlap in the list of most popular pet names (according to the Veterinary Pet Insurance Company) and popular baby names (from the Social Security Administration). On the Top 10 cat names list, Bella (eighth) and Sophie (ninth) have their human baby counterparts in the increasingly popular Isabella and Sophia.

Apparently, the journal commented, “A parent is a parent.” Still no explanation why the most popular dog name and the top cat name last year were the same: Max. v