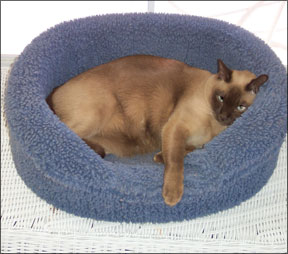 MRSA in the Purring Ones

This time the New England Journal of Medicine (Vol. 358, No. 11) reports on a German woman who suffered deep abscesses and necrotizing pneumonia. The womans cat seemed healthy enough – until tests found the pet infected with a form of MRSA that is extremely rare in humans, spa-type t131 MRSA.

Doctors at the Bavarian Food and Health Safety Authority said: “The abscesses in our patient healed only after antibiotic treatment of the cat. It remains unclear whether the cat was the source of the patients infection or vice versa . . . We conclude that pets could be considered as possible household reservoirs of MRSA that can cause infection or reinfection in humans.”

Putting a Price on Companionship

A case working its way through the Vermont courts could decide whether aggrieved cat owners can sue for more than the “market value” of their lost pets – putting a premium on “loss of companionship and society, severe emotional distress and negligent infliction of emotional distress.”

The plaintiffs say all they wanted was anxiety treatment for their two cats. Their veterinarian prescribed 1.25 mg amlodopine chew tabs, but the concentration of the drug dispensed was allegedly much more than that – causing the cats to become ill and die within a day of one another. The owners sued both the dispensing

pharmacist and the vet – demanding more than traditional tort law allows (typically the pets “market value” and medical expenses and sometimes economic damages if the pet is a breeding animal or has special training).

Preparing to argue for the plaintiffs in the Vermont Supreme Court is a professor who teaches animal-rights law at the University of Vermont Law School, Steven Wise, who says, “Ive been waiting for a case like this for a long time.” At the moment, only two states – Tennessee and Illinois – allow awards for non-economic damages when companion animals die because of negligence.

Thats number 38 of 101 Cool Games for Cool Cats, a new book published in England (Rockwell House, Ltd.), due for release in the United States and available online in the meantime.

Author Elissa Wolfson says the boxing game works best with two cats and one lightweight basket. Lacking a feline pair, one cat on the inside and a human with a feather can result in a pretty fair exhibition of boxing, Wolfson notes, adding: “When the basket is right-side-up, preferably full of warm-from-the-dryer clothes, most cats adore jumping in for a nap.”

Full disclosure: Ms. Wolfson is a “Friend of Frannie,” the ShortTakes office feline, and she brings back totebags of new toys from the annual Cat Writers Association meetings for product-testing by Frannie.

More disclosure: Rarely do commercial toys please the finicky Frannie. (Who needs a plastic, potted flower that returns to upright when swatted – when the real thing falls off the windowsill with such a satisfying crash?)

Seems that the best games start with free toys – for instance, the empty cardboard tubes from toilet-paper rolls featured in Game 61, “Totally Tubular.”