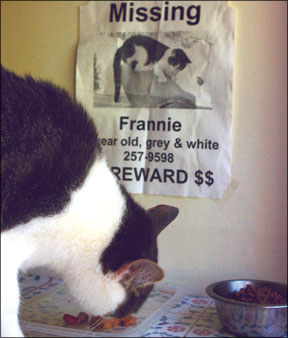 While the world holds its breath to see if the highly pathogenic avian flu virus H5N1 mutates enough to spread from person to person, German scientists wondered if the average house cat could have a role. An article in the Journal of Feline Medicine and Surgery (Vol. 10 Issue 4: “Prevalence of influenza H5N1 virus in cats from

areas with occurrence of highly pathogenic avian influenza in birds”), gave the results of surveys that covered 171 cats in Austria and Germany.

The study was presented “to learn more about the role of cats in the spread of the virus and about the risk posed to cats.” They were looking for a good “sentinel” animal among mammals, to give an early warning – the way caged canaries in coal mines used to warn of poisonous gases.

“None of the cats showed evidence of infection with H5N1 virus,” they reported – even though cats can be naturally and experimentally infected, and H5N1 was spreading among birds in the areas where the cats lived. Although this study did not show that house cats are “canaries” for H5N1 virus, other studies have clearly shown that feral or outdoor cats exposed to infected wild birds are susceptible to the virus, and may succumb with a fatal pneumonia (Veterinary Pathology, Vol. 44:261, 2007). To date, this virus has not been identified in the United States, but when it does occur in a previously uninfected area, the first clues may be the death of wild aquatic birds, plus the death of feral cats from pneumonia.

In the year since Frannies Great Halloween Escape (through the legs of trick-or-treaters at the door) the ShortTakes office feline has become a real homebody. The “Missing” poster by her dinner bowl is a reminder that indoor life is safer than the danger-filled outdoors.

But Frannies newfound domesticity didnt prevent one fright for her humans. About a month ago, her tail began to twitch. The skin rippled across her back, her eyes were wide and she tore around the house like a crazy cat. Just as suddenly, Frannie would become almost comatose – sitting in one place for hours and staring into space. Then she would “see” something in thin air, and off shed go again. She hated to be petted and recoiled from each soothing touch. She refused to play, even with favorite toys, and she stopped eating.

Late-night searching for keywords like “cat” and “twitching” brought us to an unfamiliar term on authoritative Web sites, such as CatHealth and PetPlace. The term was Feline Hyperesthesia Syndrome or FHS. (Another name is Rolling Skin Syndrome.)

Hyperesthesia translates to “exaggerated sensation” – and thats what Frannie had when we tried to touch her. Or when imaginary things drew near. Some typical FHS signs matched what we saw. There were muscle spasms and rippling skin, a twitching tail, dilated pupils in bright light, mood swings, apparent hallucinations and “exquisite sensitivity to touch,” as PetPlace.com puts it.

But there were no seizures, no aggression toward humans, and not much meowing – until the trip to the vets office. (Cars stuck in traffic dont need sirens – not with an unhappy cat on board.) After a thorough exam to look for underlying medical problems, Frannie was found to be in perfect health. Every sign of FHS had disappeared, as if by magic, on the way to the vets office. The veterinarian said shed heard of FHS, but had never seen it in a cat. And she didnt see FHS that day. We paid the bill, wondering if we had dreamed the last three, frightening days. We seat-belted Frannies cat carrier into the car. She purred all the way home, and has been fine ever since.