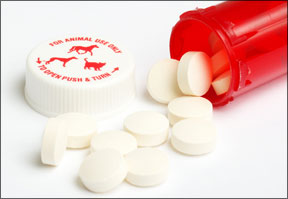 Pet owners may not realize that retention of the tablets or capsules of certain drugs (e.g., doxycycline and clindamycin) in the esophagus of the cat can cause inflammation and stricture formation. Experts currently recommend that cats should never be given

medication “dry” – instead, any pill or capsule should be followed with a food treat or a bolus of water. This study (“A comparative study evaluating the esophageal transit time of eight healthy cats when pilled with the FlavoRx pill glide versus pill delivery treats” in the Journal of Feline Medicine & Surgery, 2010) was designed to evaluate the esophageal transit time of tablets and capsules when administered with either the FlavoRx pill glide or Greenies Pill Pockets.

The FlavoRx pill glide is a one-step system that delivers the medication and a 3 ml fluid bolus at the same time. Four different medications were evaluated on different days in eight healthy cats, and the estimated average esophageal transit time ranged from 16 seconds to 26 seconds. The researchers conclude that both the FlavoRx pill glide and Pill Pockets provide acceptable transit time into the stomach.

Feline calicivirus (FCV) is generally associated with mild upper respiratory disease, but in recent years, a more severe disease syndrome with high mortality has been linked to FCV infection. Viral mutations responsible for the different disease presentations have not yet been identified, and additionally these viruses differ in antigenicity, or how they appear to

the immune system of the cat. This has an impact on the effectiveness of vaccines to induce protection against all strains of the virus.

This report ((“A dual-strain feline calicivirus vaccine stimulates broader cross-neutralization antibodies than a single-strain vaccine and lessens clinical signs in vaccinated cats when challenged with a homologous feline calicivirus strain associated with virulent systemic disease” in Journal of Feline Medicne and Surgery, 2010) ) describes the ability of a vaccine containing two different strains of FCV to induce protection in vaccinated animals against many strains of the virus. The two strains used were a traditional FCV strain and a strain isolated from a case of virulent systemic disease (VSD). Serum from vaccinated cats was tested for protection (neutralization antibodies) against various FCV isolates.

Immunity – as indicated by levels of serum neutralizing antibodies in vaccinated cats – was tested against 37 European isolates of FCV as well as six VSD isolates from the United States. It is not clear as to whether these isolates were characterized genetically or antigenically; thus, their similarity or dissimilarity could not be assessed. This is important when assessing cross-protectiveness of a vaccine against different virus strains. Serum from cats vaccinated with both FCV strains neutralized more FCV isolates than that from cats vaccinated with a single FCV strain. Not surprisingly, cats vaccinated with the VSD-producing strain were protected against challenge with the same, virulent virus.

The researchers conclude that this vaccine containing two strains is more effective than those containing a single strain. But given that the diversity of the strains against which the vaccine was tested was not described, this cannot be definitively stated.