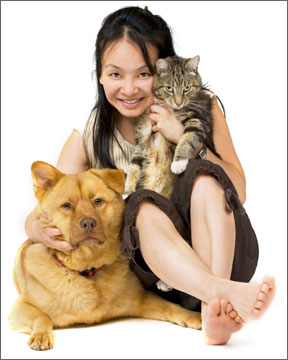 cats” in the Journal of the American Animal Hospital Association, Nov-Dec 2009) examined the medical records of twelve cats diagnosed with primary bacterial septic peritonitis and identified significant characteristics associated with this condition.

The overall mortality rate was 31 percent, and cats that experienced clinically significant decreased heart rates and hypothermia did not survive. Other clinical findings were similar to cats with septic peritonitis from identifiable causes (like fever, abdominal pain, elevated white blood cell counts, elevated serum bilirubin). All cats had anaerobic bacteria isolated from the infection; these microbes are common in the gastrointestinal tract. This would indicate that antibiotic treatment directed against anaerobes should be effective in these cases. All but two of the organisms identified in these cases are common oral flora, but gingival disease was not found to be a contributor.

For primary bacterial septic peritonitis, a mechanism for inoculation of the bacteria into the abdomen has yet to be determined, but an oral source is suggested. The investigators concluded that cats with primary bacterial septic peritonitis have a fair to good prognosis if they are treated aggressively prior to development of shock. This treatment should include surgical intervention, nutritional support and appropriate antibiotic therapy.

Based on statistics, we should assume that cats are high on the totem pole of pets. According to the American Veterinary Medical Associations “U.S. Pet Ownership and Demographics Sourcebook,” cats outnumber dogs by more than 10 million (82 million to 72 million). And, no question, there are plenty of cat lovers in the world.

But heres the dirty little secret: Cats are more often neglected than dogs, more frequently relinquished to shelters than dogs and less often taken to veterinarians than dogs.

Veterinarian Valerie Creighton, president of the American Association of Feline Practitioners (AAFP), elaborates. “This is a crisis, and the statistics are a sobering wake-up call,” she says.

Phimosis is a condition defined by the inability of the penis to be extruded beyond the preputial orifice due to either the absence of an opening or an abnormally small orifice. Medical records for ten cats diagnosed with phimosis were reviewed at Michigan State University Veterinary Teaching Hospital. The problem can either be congenital or acquired, and causes of acquired phimosis included neoplasia, edema, inflammation or scarring secondary to trauma. Signs can vary from asymptomatic changes to narrowing severe enough to cause urine retention and death.

The most common signs noted in the review (published in the Journal of the American Animal Hospital Association, Nov-Dec 2009) were stranguria and pollakiuria (difficulty with urination and abnormally frequent urination, respectively), found in eight of ten cats. The median age of the cats was 18.6 weeks and diagnosis was made by physical examination. Surgical correction by widening the preputial orifice was performed in eight of the ten cats. Follow-up communications with owners indicated that surgical correction resolved the pre-operative clinical signs attributed to phimosis.