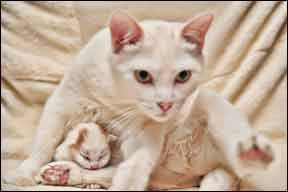 Urethral obstruction (UO) is a relatively common medical condition in male cats that usually requires emergency treatment (see related article on page 3 of this issue). Standard treatment – which involves medical stabilization of cardiovascular and metabolic derangements, correction of electrolyte abnormalities with IV fluid administration, and relief of the obstruction by urethral catheterization – may require a number of days in the hospital at considerable expense. The study (“A protocol for managing urethral obstruction in male cats without urethral catheterization,” Journal of the American Veterinary Medical Association, 2010) involved a clinical trial involving 15 male cats with UO where standard treatment had been declined by owners due to cost issues.

They speculated that pharmacological manipulation of stress, urethral tone and discomfort could help alleviate some of the functional components of the obstructive process (urethral spasm and edema) and the patients might not need urinary catheterization. Excluding the most severely affected patients, 15 cats were enrolled in the study and were administered acepromazine, buprenorphine and medetomidine. Decompressive cystocentesis was performed up to three times daily and fluid therapy was administered as needed. The cats were placed in a quiet, dark environment to minimize stress. Criteria for successful treatment were spontaneous urination within 72 hours and discharge from the hospital. Treatment was considered successful in 11 of the 15 cats. While this protocol cannot be recommended as an alternative to conventional management at this time, it could serve as an alternative to euthanasia when financial constraints prevent more extensive treatment.

A Pregnancy Test for Cats?

Investigators tried to determine the earliest day of gestation at

which relaxin – the only pregnancy-specific hormone reported in cats – could be detected in pregnant queens by using a commercially available point-of-care test designed for use in dogs (“Use of a commercially available relaxin test for detection of pregnancy in cats,” Journal of the American Veterinary Medical Association, 2010). They also calculated the sensitivity and specificity of the test for pregnancy detection on any specific day of gestation. The study looked at 162 female cats-24 queens from a breeding colony, 128 stray and feral queens undergoing ovariohysterectomy, and 10 ovariectomized cats.

The 24 queens in the breeding colony were monitored for pregnancy while blood samples were taken each day to test for relaxin until two consecutive positive tests were obtained. Pregnancy was detected as early as gestational day 20 by use of the relaxin test kit. Maximum accuracy was achieved on day 29, when sensitivity reached 100 percent. However, false-positive tests were detected in three queens. Utilizing the test, pregnancy can be confirmed at an earlier date than with the use of radiography and without the safety concerns related to radiography.

While ultrasonography is a more sensitive method for detection of pregnancy, it may not always be available and can be more expensive than blood sampling and point-of-care testing. When breeding dates are known, the predictive value and convenience of the relaxin test make it an excellent choice for diagnosis of pregnancy in cats. When breeding dates are unknown or when multiple dates are possible, interpretation of negative results becomes more complex and must be considered within the context of the patients history.