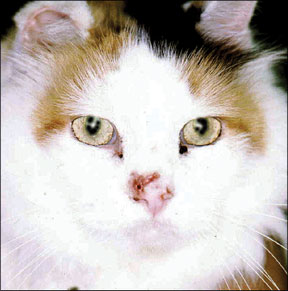 If you happen to be sitting in on your cats routine physical exam, youre likely at some point to observe the veterinarian carefully studying the animals face, gently stroking its nose, and fondling its ears. This is not merely a show of affection. Rather, the veterinarian is searching for tiny, scabby sores on the cats skin that could indicate the presence of squamous cell carcinoma (SCC) – a skin cancer that, if caught in its early stage, will most likely

be harmless and easily treated. If the skin eruptions go unnoticed, however, the cancer can progress, spread to other parts of the body, and ultimately prove fatal.

Squamous cells are the flat, irregularly shaped, scale-like cells that constitute the outer layer of the epithelium, the tissue that lines the external and internal surfaces of the organs in a cats body. The chief functions of these unique cells range from the protection of underlying tissue to the facilitation of nutrient exchange. According to Margaret McEntee, DVM, an associate professor of oncology at Cornell Universitys College of Veterinary Medicine, skin tumors in general are the second most common type of feline cancer diagnosed at the Cornell University Hospital for Animals, exceeded only by lymphoma. And among skin cancers, SCC ranks fourth – after basal cell tumors, mast cell cancer and fibrosarcoma.

SCC can be precipitated by a variety of influences – physical trauma, for example, or serious burns that damage these superficial cells. Far and away the most common cause, however, is excessive exposure to sunlight. “The ultraviolet radiation of the sun damages the cats DNA,” says Dr. McEntee, “and its cells begin dividing and multiplying. The tumors that result from solar exposure occur most commonly in lightly pigmented or white cats in areas that are hairless or sparsely haired. Thats the strongest association that we have noticed with this type of cancer. But SCC can also affect dark-coated cats on areas of the body where there is hair to protect the skin against the suns rays. This disorder, referred to as Bowens disease, may be associated with a virus rather than sun exposure.”

The most common sites of lesion development on a cat, she says, are the temples, the outer tips of the ears (pinnae), the eyelids, the lips and the nasal planum, which Dr. McEntee refers to as “the little button at the end of a cats nose.” About one-third of cats diagnosed with SCC of the skin, she notes, have multiple lesions.

Also seen with relative frequency are squamous cell tumors in the oral cavity. “For lesions that occur there,” says Dr. McEntee, “we suspect that chronic inflammation or chronic dental disease may be related, but we dont know that for sure.” Oral cavity tumors account for only about three percent of feline cancers, she notes. “But of these,” she notes, “approximately three-fourths are squamous cell tumors, so thats the first thing we think of when examining a cat with a serious lesion in its mouth.”

Occasionally, though rarely, these carcinomas are seen developing in the liver, lungs and other internal organs. Although not scientifically confirmed, it is widely believed that these tumors are caused by exposure to certain environmental carcinogens – especially tobacco smoke. “This is a reasonable theory,” she says, “in view of the fact that cats groom themselves and ingest whats on their coats.” Associations have also been made with exposure to the chemicals in flea collars and to consumption of canned cat foods, specifically those containing tuna. These associations, however, have not as yet been statistically confirmed.

External SCC tumors are usually single, small and poorly outlined, with irregular, hardened borders. The surrounding area may be slightly pink, and there may be hair loss. The skin eruption is apt to be ulcerated and oozing fluid, and its surface may be either concave or protruberant. Although SCC lesions can be highly invasive at their points of origin, they tend to spread (metastasize) slowly. Says Dr. McEntee: “At first, a skin lesion will appear to be fairly benign, looking like a little scab or maybe a small scratch, and over time it may flake off and the cats skin will look normal. But eventually – perhaps months or a year later – it will reappear.”

If untreated, she says, the lesion will become gradually more ulcerative. As the tumor progresses, swelling will occur in the area; this is likely to be accompanied by tissue erosion around the lesion as the cancer progresses into deeper epithelial regions that may extend from the facial area into the nasal cavity and beyond. And if it eventually metastasizes to a regional lymph node, it may then spread from there to other areas of the body.

Oral SCC, she notes, may also be missed in the early stage because it tends to cause ulceration of the gums and loosening of teeth as it invades the jaw, and these signs may be confused with those of dental disease.

The presence of SCC will be confirmed by means of a biopsy, a procedure for which the patient must be put under general anesthesia. Several treatment options are available for lesions that are diagnosed at an early stage, notes Dr. McEntee. “We can perform surgical removal of the affected portion of a cats nose or ears,” she says. “And multiple facial lesions that are less than approximately two millimeters deep can be treated successfully with radiation therapy.”

Also, she points out, some veterinarians use cryotherapy, which will destroy a lesion by freezing it. And in some cases, directly injecting chemotherapeutic substances into the tumor may be useful. For SCC in the mouth, a combination of surgery and radiation therapy may be successful and result in long-term control, but only if the cancer is detected at an early stage.

However, says Dr. McEntee, when an SCC lesion is more advanced, “We may not be able to control it. We can attempt to do so with a full course of radiation, which will require more than three weeks of treatment. But even this aggressive approach isnt likely to be successful once the tumor has progressed and has spread internally. This is why it is so important for owners to spot these lesions at an early stage, when a tumor is still very treatable.”

In addition to the emergence of a suspicious sore on an animals nose, ears, eyelids, lips or any other area of the body that is hairless, the warning signs of SCC in the mouth include excessive salivation and drooling, weight loss, bad breath, swelling of the upper or lower jaw and a decline in appetite.