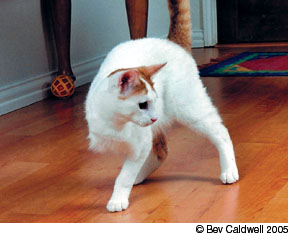 It can be shocking at first to see a cat running around that is missing a limb, but many disabled cats can still lead full and contented lives. Cats possess a tremendous sense of balance and, even without all four limbs, they can often get around normally. All a three-legged cat needs is proper medical care and a loving and patient human companion who is willing to adjust the cats environment to his specific needs.

How Cats Become Disabled
The extent of a cats disability depends on which legs are missing or dysfunctional.  Most three-legged cats can compensate very well, says Jane Brunt, DVM, of CHAT, the Cat Hospital at Towson in Baltimore, Maryland. The loss of a hind leg is a little harder to manage than the loss of a front leg. This is mainly due to problems of elimination that occur when a hind leg is compromised.

Disability can occur from a number of causes, according to Dr. Brunt. A cat may need a limb amputation due to disease, such as cancer, an infection or nerve impairment. Cats that go outside face the risk of losing a limb to trauma, such as being hit and injured by a car.

The loss of the use of hind legs – which can be caused by spinal cord problems, severe arthritis or a vertebral disk problem – not only presents the obvious mobility difficulties, but is accompanied by loss of bladder and bowel function.

Retired librarian Barbara Elliott from Towson, Maryland adopted her Himalayan cat, Sweet William, when he was one year old and had been abandoned. At first, we noticed that he was walking a little funny, she says. As time went on, we realized he was losing the function of his hind legs. But he acted like a normal cat. He would jump up on the bed. Later on, he used his front paws a lot for climbing instead of jumping. In fact, we had a fenced-in yard and he would pull himself up by his front paws and then throw himself over the fence.  We had two other cats at the time, Elliott says, and I would watch him like a hawk. But he still got away from me.

Ms. Elliott never received a definite diagnosis of Sweet Williams problems until Dr. Brunt examined the cat, reviewed all the previous findings and consulted two specialists: a veterinary radiologist and a veterinary neurologist. Unfortunately, an incurable degenerative spinal disorder was the diagnosis.

Now 12 years old, Sweet William drags himself around, using his front legs. And he is incontinent of urine and feces. He hasnt used the litter box for at least six months. He just drops his feces wherever he is. Now we have confined him to a part of the house where there is tile so it is easier to clean up after him. Dr. Brunt explains that paraplegic cats with neurological impairment dont even know they have to eliminate because they cant feel the urge.

Sometimes medications can help control the contraction of the bladder, says Dr. Brunt.

And sometimes we can teach people how to express and empty the bladder. Then the cat is less likely to dribble urine or get a bladder infection. But usually human companions have to decide whether or not they can tolerate the incontinence.

How Cats Adapt
If loss of a limb is sudden, there will be a period of adjustment that may be difficult to witness as your cat tries and fails at some activities, such as jumping and climbing. He may even sustain some minor injuries. But if you give your cat a chance, he will work out his own limitations and even create some pretty novel ways of getting into his favorite spots.

There are some things you will have to do to help your cat adjust. You will probably need to groom your cat much more often than you did before, because a cat uses his limbs to clean his body. And keep your cat from gaining weight; extra pounds make it hard on the remaining paws to support the body.

Most important, however, is your cats need for extra protection from harm in the environment. If your cat roamed outside before, he must now stay inside. In the house, block off areas where your cat might hurt himself, says Dr. Brunt, such as steep steps. If there are multiple cats or other animals in your family, you may have to separate your disabled cat from the others if there is a problem getting along.

Some cats that have lost the use of their hind legs can benefit from a specially fitted cart. The cat sits in a sling attached to the cart (which supports the whole back end of the cat) and can roll the cart around by using his front paws.

In the end, adjustment to a disability depends on your cats mindset and your patience.

If your cat isnt in pain and you can make the necessary environmental changes, you and your cat can live a good life together, says Dr. Brunt.

Says Ms. Elliott, Despite Sweet Williams handicap, weve had many happy years together.