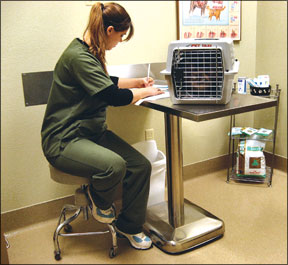 Among all causes of lethal feline disease, none should be taken more seriously by cat owners than those caused by two specific submicroscopic organisms: feline leukemia virus (FeLV) and feline immunodeficiency virus (FIV). Although these viruses are somewhat different in appearance and in the manner in which they exact their toll on feline health, infection with either one of them, if undetected, is capable of causing a cats premature death. To

make matters worse, FeLV and FIV infections are by no means rare. Recent estimates indicate that two percent to four percent of the 83 million or so cats in the U.S. harbor one or both of these two viruses.

At present, several vaccines to prevent FeLV infection are available, says Fred Scott, DVM, PhD, professor emeritus of virology at Cornell Universitys College of Veterinary Medicine and the founding director of the Cornell Feline Health Center. With rare exceptions, all cats should be vaccinated against FeLV as kittens and then revaccinated one year later. However, notes Dr. Scott, “Some veterinarians feel that, after these initial vaccinations, the benefits of annual vaccinations are outweighed by the risk of the cat’s developing cancer – sarcoma – at the vaccination site.” As for FIV, a vaccine has been developed, but its efficacy against all strains of the virus is yet to be determined. The key to combating the spread of these infections, therefore, is to identify infected cats and to prevent their coming into contact with uninfected animals.

Diagnosis of FeLV infection, says Dr. Scott, is based on a cats medical history and clinical signs and the results of tests to determine whether the virus is present in the blood. A positive test will identify the presence of FeLV or its antigens – unique proteins that a cats immune system develops as a response to infection. Two types of tests commonly used for this purpose are an ELISA (enzyme-linked immunosorbent assay), which can be performed in a veterinary clinic and is routinely carried out as the initial FeLV screening test; and an IFA (immunofluorescent assay), a confirmatory test that, because of the technology required, must be done at a commercial laboratory.

For diagnosis of FIV infection in unvaccinated cats, the ELISA is used to detect specific antiviral antibodies circulating in the blood. These anti-FIV antibodies are produced during the normal immune response to a viral infection. The IFA is not used to confirm FIV infection, says Dr. Scott. Instead, the suspected presence of FIV-associated antibodies can be substantiated by means of a so-called Western blot, in which specific antibodies to FIV can be identified. This procedure, like the IFA, must be carried out at a laboratory that is specially equipped for the test; results will typically be available within a week.

Once cats have been vaccinated against FIV, the antibody assay for the virus is no longer useful, since the test cannot distinguish between antibodies produced as a result of infection and those produced following vaccination. Unfortunately, there is no test available at present to diagnose FIV in FIV-vaccinated cats.

For a number of years, an innovative kind of assay called the IDEXX Combo test has been routinely used by veterinarians. The assay, which typically costs about $60, can be performed in a local clinic and completed in a matter of minutes. Basically, Dr. Scott explains, the assay kit consists of a small piece of filter paper impregnated with various dots of test material: FeLV- and FIV-positive controls, a negative control, an FeLV sample test spot and an FIV sample test spot. When a few drops of a cats blood, serum or plasma are put on the paper, either a change in the color of the various dots – or no change at all – will indicate whether or not the animal is harboring one or both of the viruses. Various other commercial kit tests are available to diagnose FeLV and FIV.