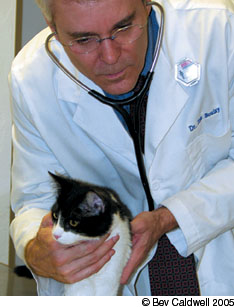 Its always a pleasure to see your cat come running to you at mealtime and dig enthusiastically into its chow. Apparently youre feeding it the right stuff. But theres a limit.

A cat that never stops looking around for food and that never fails to eat everything thats put in front of it (and whatever else it can sink its sharp little teeth into) may be in serious trouble. Such an insatiable appetite – especially if accompanied by noticeable weight loss – is one sign of a glandular disease called hyperthyroidism. If the condition persists and remains untreated, a cat can eventually waste away and die, no matter how much food it eats.

Small but Crucial
Feline hyperthyroidism is a condition caused by a malfunctioning thyroid gland, a relatively small structure with two lobes, right and left, that are situated in a cats neck adjacent to the upper end of its trachea, or windpipe. It is a crucial component of an animals endocrine system, a varied set of glands located throughout the body that secrete hormones into the bloodstream and thereby regulate many vital bodily processes.

The adrenal glands, for example, secrete hormones that help keep blood pressure and heart function in check and control the bodys use of fats, proteins and carbohydrates while the pancreas produces the hormone, insulin, that regulates blood sugar. The thyroid glands function, on the other hand, is to regulate an animals overall metabolism – the speed at which all of its bodily processes are carried out.

The thyroid gland accomplishes this by secreting two vitally important hormones – commonly known as T3 and T4 – that circulate through the system and stimulate receptors on the internal organs. When the thyroid is operating properly, an animals metabolic rate is smoothly maintained. When the gland secretes either too much or too little T3 and T4, all of a cats bodily processes either accelerate or slow down, and the animal can eventually end up in big trouble.

Excessive Production
Hyperthyroidism, a dysfunction of the thyroid gland that is frequently observed in older cats, is marked by excessive hormonal production. The condition usually results from one or more tumors in the thyroid gland, says Mark Peterson, DVM, head of the endocrinology division at the Animal Medical Center in New York City. The tumors are almost always benign hyperplasias, growths that result from an overproduction of noncancerous cells. Only one percent or so of the growths associated with feline hyperthyroidism are cancerous.

For reasons that remain unknown, says Dr. Peterson, the presence of a benign tumor will precipitate excess hormone production and, as a consequence, an acceleration of most bodily processes. This speed-up will gradually result in signs that may be noticed by an animals owner, such as a persistent gain in appetite accompanied by an apparent loss of weight or a visible deterioration of a cats hair coat.

Other consequences, however, will not be clear to the owner. One especially dangerous condition that can be precipitated by hyperthyroidism is thyroid-induced cardiomyopathy, a potentially life-threatening disease of the heart muscle. This condition will most likely be spotted during a routine physical examination when a veterinarian notices a suspiciously rapid heart beat. The presence of cardiomyopathy is then confirmed by ultrasound examination.

Is There a Typical Patient?
The condition is the most common hormonal, or endocrine, disease observed in cats, says Dr. Peterson, noting that three or more cats are diagnosed with hyperthyroidism each week at his clinic. About 90 percent to 95 percent of the patients are 10 years of age or older, he says, and the average age is about 13. The only reason that the average age isnt higher is that when cats get to be 16 or 17, they die of other diseases. Weve seen it in young cats, but in general you can consider feline hyperthyroidism to be an older-age disease.

Clear Indicators
Increased energy and hyperactivity are among the indications that a cat is suffering from hyperthyroidism. These indications may surface in connection with the animals increased appetite. Its not unusual, says Dr. Peterson, for a cat to wake up its owner in the middle of the night or early morning crying out for food. And as the disease progresses, the cat may become irritable and very nervous as well. It may lick itself excessively and develop bald spots, and it may neglect to use the litter box.

In addition, the cat is likely to vomit frequently after eating and to have frequent bouts of diarrhea, while at the same time experiencing progressive weight loss as the animal continues to increase its intake of food and water. The owner may not notice the weight loss when it amounts to only a half-pound or pound. But eventually, Dr. Peterson says, it will become obvious to the owner. If not, a veterinarian will probably spot the weight loss in the course of the cats yearly physical exam.

Confirming Suspicion
Fortunately, says Dr. Peterson, hyperthyroidism is familiar to veterinarians and relatively easy to diagnose. He describes the diagnostic procedure, which he recommends for all cats over age eight who are losing weight while eating normally or excessively, as follows: A suspicion of hyperthyroidism is based on the cats history, clinical signs and abnormalities that show up in a physical examination. In most cats, an enlarged thyroid nodule can be felt in the neck.

A tentative diagnosis of hyperthyroidism is confirmed by measuring a high level of the T4 hormone circulating in the blood. Just a single blood test will be 90 percent to 95 percent accurate in making a definitive diagnosis.

Treatment Methods
The condition can be treated medically, surgically or with radioactive iodine. Medical treatment consists of the administration of methimazole (TapazoleTM) in pill form three times per day. The medication usually controls the disease, but it is not a cure. It will block the secretion of thyroid hormones but will not remove or destroy the tumor responsible for the condition.

Most owners decline medical treatment, says Dr. Peterson, since the pills, costing about a dollar per day, will have to be administered daily for the rest of the cats life, and the dosage may have to be increased periodically. Furthermore, the medicine may have undesirable side effects, such as vomiting. And, he adds, some cats are very difficult to pill.

Surgical treatment, which remedies the hyperthyroid condition, involves removal of all or most of the gland. Sometimes only one of the two lobes is removed. According to Dr. Peterson, surgery was once the treatment of choice among veterinarians, but is much less frequently used today.

Not that its a bad treatment, he says, but there are problems associated with it. The thyroid itself is easy enough to remove, but there are small glands – the parathyroid glands – located near the thyroid and even partly within the gland itself. These tiny parathyroids regulate a cats calcium levels, and if they are damaged or removed by accident, which is pretty easy to do when youre removing the entire thyroid, the animal will have another disease introduced thats even worse than hyperthyroidism.

This method is effective, he says, because iodine is normally an ingredient of the thyroid hormone. When the iodine is made radioactive, it still gets taken up by the gland to make the hormone, but when it gets into the tumor it gives off radiation that destroys the growth. Treatment with radioactive iodine is relatively expensive – typically ranging from $1,200 to $1,500. But its a one-time treatment, says Dr. Peterson, that is 95 percent successful and will relieve a cats hyperthyroidism for the rest of its life.

Following any of the three treatments, he notes, a cat will regain its normal dietary and behavioral patterns right away, although it may take two or three months for its weight to return to normal.