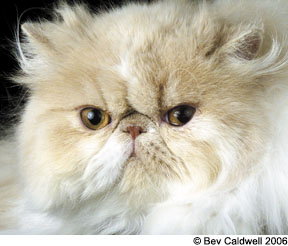 Although one cat may be prettier, smarter or more athletic than another, nature plays no favorites when it comes to doling out heart disease. All cats are at potential risk for serious insult to this vital organ. In some cases, the signs are obvious to the trained eye. In others, a serious heart disorder can remain hidden for years before finally expressing itself in a sudden, perhaps fatal, deterioration of function.

The best thing that owners can do is to make sure their cats have thorough medical checkups – at least once a year – during which the veterinarian pays close attention to the heart. While examination with a stethoscope cannot detect all feline heart diseases, its probably the most cost-effective approach to diagnosis in otherwise healthy cats.

Cardiac Anatomy
The feline heart, like the human heart, is a hollow, muscular organ located in the center of the chest. Its main functions are to pump blood into the lungs, where waste products (mainly carbon dioxide) are removed, and to pump the refreshed, oxygen-rich blood throughout the body.

Both the left and right sides of the organ have upper chambers (atria), which collect blood, and lower chambers (ventricles), which pump blood. First, the right atrium collects oxygen-depleted blood from the body. When the chamber is full, the blood is propelled into the right ventricle, from which it is pumped, via the pulmonary artery, into the lungs, where the carbon dioxide is removed and the bloods oxygen supply is replenished.

The blood moves from the lungs to the left atrium and then to the left ventricle, from which it is pumped – via the aorta – into the bodys circulatory system. The four heart chambers are separated internally by muscular partitions (septa) and by a series of one-way valves that keep blood moving in the proper direction.

Congenital Defects
Most feline heart disorders are acquired during the course of an animals life, but others are present at birth. However, says John Bonagura, DVM, a professor of veterinary clinical sciences at the Ohio State University Veterinary Hospital, congenital feline cardiac disease is relatively rare, occurring only in an estimated one or two percent of kittens.

The most common congenital disorders, he notes, are heart valve malformations and holes in the septa. Abnormal valve development most often involves the mitral valve, located between the left atrium and the left ventricle. While a number of structural problems can occur, the end result is typically a valve that cannot close properly and thus allows blood to leak backwards into the atrium. Holes in the septa most frequently affect the membrane partitioning the right and left ventricles and may also cause the inappropriate flow of blood between the heart chambers.

Although some kittens may respond favorably to medicinal therapy for these disorders, surgical treatment is not usually feasible, says Dr. Bonagura, and the prognosis for a severe defect is generally poor. Minor defects, however, may be well tolerated and even allow a normal life.

Acquired Disorders
While occasionally observed in kittens, a disease called cardiomyopathy is almost always an acquired condition and is by far the most common among all adult feline heart disorders, accounting for almost two-thirds of heart conditions diagnosed in cats.

Cardiomyopathy is brought about by a structural abnormality in the muscle enclosing one or both ventricles, with the affected chamber taking on a thickened, dilated or scarred appearance. (The left ventricle is always affected; right-chamber involvement may also occur, but only rarely.)

The abnormality sets the organs blood-collecting and blood-pumping mechanics awry, and such dysfunction can progress to congestive heart failure – and a resulting collection of fluid in or around the lungs – and then to respiratory distress. Other potential outcomes of cardiomyopathy include paralysis-causing blood clots, which arise from the left atrium and lodge in arteries somewhere in the body – usually those supplying the rear limbs, and sudden death.

Most feline cardiomyopathies are primary diseases – those whose origins are either genetic or unknown. Some, however, are secondary diseases – those whose causes are specifically identifiable and include such conditions as anemia, hyperthyroidism and high blood pressure. Three types of disease account for nearly all of the primary cardiomyopathies:

Restrictive cardiomyopathy, which accounts for approximately 10 percent of the primary heart muscle diseases diagnosed in Dr. Bonaguras practice, is caused by the excessive buildup of scar tissue on the inner lining and muscle of a ventricle. This prevents the organ from relaxing completely, filling adequately, and emptying with each heartbeat. Most often affecting geriatric cats, this disorder is also characterized by severely enlarged atria and reduced cardiac filling and pumping efficiency.

Dilated cardiomyopathy, the third type of the disease, is comparatively rare, says Dr. Bonagura, probably accounting for only one percent or two percent of primary cardiomyopathy cases. It is characterized by an enlarged and poorly contracting left ventricle. The heart walls are thin and flaccid, which results in weak pumping and a reduced forward flow of blood from the heart.

According to Dr. Bonagura, there are two alarming signs that a cat may be suffering from advanced cardiomyopathy. The animal cant breathe or it cant walk, he says. If it is struggling to take in air or if it cant move its rear legs, you should seek veterinary help right away.

Although most frequently affecting male cats, cardiomyopathy often claims the lives of females as well. While primarily occurring in older animals, the disease can also occur in kittens. And though genetic predisposition puts some breeds – Persians, ragdolls and Maine coons, for example – at elevated risk, no breed is immune to its threat.

In addition to the three primary cardiomyopathies, Dr. Bonagura cites other acquired feline cardiac disorders regularly encountered by veterinary cardiologists: feline myocarditis, an inflammation of the heart muscle; myocardial infarction, tissue death in an area of the heart muscle resulting from a blood clot; and unclassified cardiomyopathies, a category comprising hybrids of the various conditions.

Diagnostic Measures
The initial objective in diagnosing primary feline heart disease is to exclude other conditions that could yield similar cardiac signs. Says Dr. Bonagura: Well listen to the animals heart for murmurs or abnormal sounds and measure the blood pressure to make sure its not hypertensive. Well run a blood test to rule out anemia. And well check for hyperthyroidism, which can also cause an enlarged heart. If we find a thyroid problem, for instance, well treat it and, with that, weve usually taken care of the heart disease.

In most cases, X-rays will be taken. Sometimes an electrocardiogram or a blood test to identify heart muscle damage will be done. The definitive diagnosis, however, is achieved through an ultrasound image of the heart –  an echocardiogram – which will clearly reveal any gross abnormalities. Depending on the level of detail to which the examiner takes the echocardiogram, says Dr. Bonagura, the cost usually ranges between $200 and $400.

Standard Therapy
Treatment for cardioymyopathy and other heart conditions depends on the type and the severity of the disease. Medications such as beta-blockers – which slow the patients heart rate, decrease its need for oxygen and reduce demands on its ventricles – are commonly used for hypertrophic cardiomyopathy. The drug diltiazem may be used to help the heart muscle to relax. And if heart failure occurs, diuretics and ACE inhibitors will be prescribed. A difficult problem often facing veterinarians is deciding which, if any, drugs can effectively and safely prevent formation of blood clots in advanced cardiomyopathy.

What does the future hold for those animals that have diseased hearts but have not developed blood clots or progressed to congestive heart failure? Many cats – whether or not theyre on medication – can live for many years with stabilized disease,  Dr. Bonagura says. But in other cats, the disease will progress and inevitably lead to life-threatening complications.