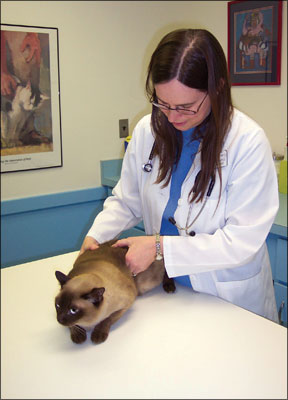 Whether your cat is wide awake or sleeping soundly, its immune system remains on full alert, protecting the animal from assault by the viruses, bacteria and other foreign invaders – called antigens – in its environment. And in the vast majority of cats, the immune system will continue to function effectively – without letup – from the day an animal is born until the day it dies.

For the unlucky few, however, a disorder will arise at some stage of life that seriously compromises the systems ability to combat threats from outside invaders. It is also possible for an animals immune system to become confused and start to attack its own

cells and tissues as if they belonged to a foreign organism, the consequences of which are generally classified as autoimmune diseases.

Fortunately, disorders of the immune system are relatively uncommon in cats, says John Parker, BVMS, PhD, an assistant professor of virology at the Baker Institute, a unit of Cornell Universitys College of Veterinary Medicine. As for autoimmune disease, it is rarely seen in cats – far less frequently, he points out, than in dogs or humans.

The clinical signs of any immune system disorder – autoimmune or otherwise – are typically subtle, and the causes are likely to be identifiable only by an expert veterinary immunologist employing sophisticated diagnostic tests. Although the workings of this intricate system may seem forbiddingly complex, cat owners might do well to understand the basics – the components of the immune system, how it functions and the various problems that can diminish or destroy its effectiveness.

The smooth functioning of the feline immune system relies on a variety of specialized cells and molecules. The principal component is the lymphocyte, a white blood cell that develops in lymphatic tissue and is present in every organ. Lymphocytes that mature in bone marrow are called B lymphocytes, or B cells; those that mature in the thymus gland are called T lymphocytes,or T cells. These two types of cells have different functions. B cells are responsible for the production of antibodies – protein substances in the blood and tissues that destroy or weaken bacteria, poisons and other antigens. Various types of T cells – such as cytotoxic T lymphocytes and helper T cells – serve several purposes, such as detecting and killing antigens or assisting other lymphocytes in doing so.

These cells and others play important roles in, as Dr. Parker puts it, two “arms” of the immune response – the

innate system and the adaptive (or cell-mediated) system. He says of the innate system, “It reacts very quickly, recognizing that something is in a cats system that shouldnt be there. The quickest way to remedy the situation and limit infection is to kill an infected cell, and the innate system will accomplish this. But this response is nonspecific – it doesnt distinguish one antigen from another – and it has no memory. The next time that infection comes along, the same process will take place. In effect, the innate system can be thought of as primarily an early-warning system that activates the more potent cell-mediated system.”

On the other hand, the cats adaptive immune system deploys cells that are specifically designed to counteract certain antigens – and it has a memory. Says Dr. Parker: “A cell-mediated response is much more specific and kicks into action immediately when it is alerted by the innate system to the presence of a virus, bacterium or other antigen.” The response can take one of two forms: Either the immune cells will produce antibodies that destroy the antigen (a process called “humoral immunity”) or it will develop molecules on the surface of an infected cell that will signal its presence, in which case other immune system cells will rush in like storm troopers and kill it. In addition, notes Dr. Parker, certain immune system cells are biochemically able to “remember” their contact with specific antigens and will combat them in case of recurring infection.

According to Dr. Parker, the mechanisms of the immune system can go awry in certain instances to the extent that the systems response to an antigen is more harmful to the host than the inciting antigen itself. And, of course, there are some diseases that are chiefly characterized by their potential to suppress the immune system and thus render it unable to retaliate against invasion by antigens. Most notorious among such disorders is infection with the feline immunodeficiency virus (FIV), which most perilously targets a cats T-helper lymphocytes, the cells that play a key role in the animals immune system and its ability to ward off opportunistic infection.

The most common disorders related to the feline immune system may be allergic conditions. These cause the system to overreact to the presence of a sensitizing antigen (allergen). In cats, according to Dr. Parker, skin lesions seem to predominate as the common signs of allergy. Many of these sensitizing agents – dust mites, dander or pollen, for example – are inhaled; in some cases, the lesions result from hypersensitivity to certain food ingredients. Treatment of such hypersensitivity relies on accurate identification of the underlying cause of the allergy, followed by avoidance of the allergen and, in some cases, treatment to subdue the overresponsive immune system.

A wide range of feline diseases are thought to be caused by a failure of a cats immune system to distinguish “self” from “nonself” causing it to assault its own cells as if they were those of a foreign antigen. Among those often considered to be such autoimmune diseases are: hemolytic anemia, a deficiency in red blood cell count; pemphigus syndrome, a group of skin diseases; eosinophilic keratitis, a chronic eye infection; cholangitis, an inflammatory disease of the liver and bile duct; and systemic lupus erythematosus, a disorder whose clinical signs include anemia, arthritis and facial skin lesions.

In treating a condition such as hemolytic anemia, says Dr. Parker, a veterinarian will more or less disregard the notion that it is an autoimmune disease and, rather, will look for a specific underlying cause. “In cats,” he says, “the cause would probably be an infection, so thats what you look for and treat. You find the agent, treat it and the condition is likely to resolve. If you cant identify a specific agent, then you could do a test treatment with an immune system suppressant to see whether that might improve the condition. If suppressing the immune system works, an assumption might justifiably be made that the anemia is an immune-mediated condition. Some people might go further and call it autoimmune – but you still wouldnt have proof that this is the case.”

Knowing something about the feline immune system can be of value to cat owners, says Dr. Parker. “But it’s important that they realize the incidence of immune system disorders in cats is extremely low, especially by comparison to the incidence in humans.”