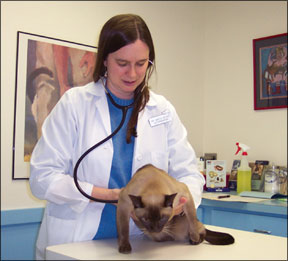 Of all feline health problems, intestinal disorders rank among those most frequently treated by veterinarians at local clinics and large referral hospitals throughout the U.S. According to Melanie Craven, BVM, an internist and researcher in gastroenterology at Cornell Universitys College of Veterinary Medicine, vomiting, diarrhea and dramatic weight loss are the most common signs of feline intestinal disease in cats. However, she notes, subtler signs

such as lethargy and appetite fluctuations can also suggest the presence of an intestinal disorder.

Some of these disorders may be secondary to conditions originating in other organs, such as the thyroid gland, liver, kidneys and pancreas. But, Dr. Craven points out, the problems usually originate in either the upper or lower segments of a cats intestines – the pliable, circuitous tunnel leading from an animals stomach to its anus.

There are plenty of spots where problems can occur, since a cats intestinal tract – if it were strung out end to end – is typically eight to 10 times longer than its body. So any suspicious signs call for prompt veterinary attention. In some cases, an intestinal disorder may require emergency treatment.

The most prevalent feline intestinal disorder by far, says Dr. Craven, is inflammatory bowel disease (IBD), a chronic inflammatory disease of unknown cause. A variety of mechanisms for development of IBD have been suggested; it is currently believed that complex interactions between intestinal tissue immunity and the microflora that normally reside in the feline intestines are likely to be responsible. Overall, however, IBD remains an idiopathic condition – one whose origins remain largely unknown.

Although chronic vomiting, weight loss and diarrhea are the most common clinical signs of the condition, other indications that a cat is afflicted with IBD could include either inappetence or ravenous appetite; lethargy; frequent passing of gas; malodorous feces; increased frequency of defecation; difficult defecation; and blood or mucus in the stool.

Treatment of IBD usually involves dietary modification and the use of certain medications. Typically, an affected cat will be placed on a highly digestible novel protein diet, which, by itself, may be successful. If medications are required, they are likely to include an antibiotic such as metronidazole or an anti-inflammatory drug, usually a glucocorticoid, which suppresses the immune system response.

“The majority of cats diagnosed with IBD will respond well to treatment,” says Dr. Craven. “Others will have intermittent clinical signs requiring continual treatment. And perhaps 10 percent to 20 percent of affected cats just wont respond to treatment.”

Although IBD is the most frequently diagnosed feline intestinal disorder, many other problems can result in significant disease. A definitive diagnosis of IBD, therefore, requires the ruling out of the other possible disorders, such as an overactive thyroid gland, diabetes mellitus, and chronic kidney or liver disease; food intolerance; viral, bacterial, fungal and parasitic infections; exocrine pancreatic insufficiency; gastrointestinal obstruction; and intestinal tumors.

One serious viral cause of intestinal inflammation (enteritis) in cats is the feline panleukopenia virus, a small organism that exists in the environment worldwide. Especially lethal among kittens and young cats, this virus was once the source of deadly epidemics in cat shelters and other confined areas with dense feline populations.

Thanks to the development of effective vaccines, intestinal disease attributable to the panleukopenia virus rarely occurs these days. Another type of virus that can cause severe intestinal inflammation, diarrhea and vomiting in cats, notes Dr. Craven, is the feline enteric coronavirus. In addition, she says, infection with the feline immunodeficiency virus and feline leukemia virus may have intestinal implications.

Potential bacterial pathogens of the feline intestinal tract include Salmonella, Campylobacter, Clostridium perfringens, E. coli and Helicobacters, says Dr. Craven. However, she adds: “These bacteria may also be present in normal cats, so it can be difficult to determine whether they are responsible for an animals clinical signs.”

Cats can also harbor intestinal parasites. Although these organisms tend to cause few if any problems in mature cats, they can be significant sources of disease in kittens. The most common parasites include roundworms, hookworms and tapeworms as well as protozoal organisms, the most frequently identified of which is Giardia. “Parasitic infections are often asymptomatic or self-limiting,” says Dr. Craven, “unless a cat is immunosuppressed or has another underlying intestinal disease that may cause either a heightened or muted intestinal immune response.”

Dr. Craven cites several other potential sources of feline intestinal dysfunction, including, but not limited to:

–Neoplasias – Tumors, either benign or malignant, can develop anywhere within the intestinal tract or can spread to the intestines from other parts of the body. Lymphoma is the most common type of intestinal neoplasia in cats, and may be discrete or diffuse, resulting in variable clinical signs including lethargy, anorexia and weight loss, vomiting, diarrhea and gastrointestinal bleeding. It is a lethal type of cancer, although cats with a certain type of lymphoma (lymphocytic) may respond favorably to treatment with chemotherapy.

–Allergies – Intestinal inflammation can result from an allergic reaction to or intolerance of food or an environmental allergen.

–Hairballs – A cat will normally spit up a hairball from its stomach when the mass becomes large and irritating. It is possible, however, for a hairball to pass from an animals stomach into its intestines and create a potentially life-threatening blockage.

–Poisons – Feline intestinal tissue can be severely assaulted by the ingestion of such toxins as ethylene glycol, the main ingredient in antifreeze, and by certain poisonous plants, such as Easter lilies and rhododendrons.