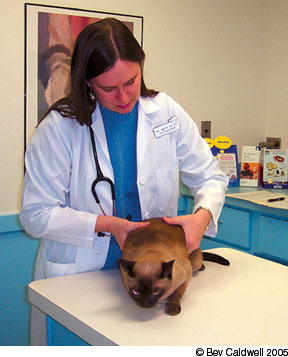 Your cats pancreas is a relatively small organ, yet the role it plays in sustaining her life is immense. Indeed, her very existence depends on a properly functioning pancreas, and any disease or injury that significantly compromises its efficiency is very likely to prove fatal.

According to Richard Goldstein, DVM, assistant professor of small animal medicine at Cornell Universitys College of Veterinary Medicine, disorders of the pancreas – while fewer in number and less common than those affecting most other organs – can be especially deadly. Consequently, cat owners should be acquainted with the structure of the pancreas, the important role that it plays, and the clinical signs associated with pancreatic disease.

Vital Functions
The pancreas is a slender, pink, V-shaped strip of tissue that is tucked snugly within the right-hand side of your cats abdomen, at the junction between the kidney and the duodenum – the beginning portion of the intestine, immediately below the stomach.
The pancreas plays two crucially important roles, one of which is the endocrine function.

Although comprising only about two percent of total pancreatic mass, the endocrine tissue is made up of tiny, specialized clusters of cells called islets of Langerhans. These cells produce insulin and glucagon, two hormones needed to control levels of sugar in the blood.

The other role that the pancreas plays is the exocrine function, the major activity of which is to produce and secrete a potent liquid rich in enzymes that pass out of the pancreas and into the small intestine to assist in the digestion of fats, proteins and carbohydrates.

Various Disorders
Cats, especially older ones, can develop cancer of the pancreas. Cancer that begins in the pancreas is relatively common and invariably fatal, mostly because it tends to spread rapidly throughout the body. It is also common for cancer to originate elsewhere in an animals body and spread (metastasize) to the pancreas. When it does reach the pancreas, it is unlikely that an affected animal will survive beyond a few months.

Another condition, called nodular hyperplasia, also primarily affects older cats. This condition, which is marked by a thickening of the pancreatic tissue, is not generally regarded as a serious health threat.

But the most frequently occurring disease of this organ is pancreatitis, which originates in the tissues associated with the organs exocrine function.  While in the pancreas, explains Dr. Goldstein, the digestive chemicals are sequestered within tiny droplets that prevent their coming into direct contact with pancreatic tissue. Moreover, he says, the enzymes are biochemically programmed to remain inactive until after they have been secreted and have traveled via the pancreatic duct into the small intestine.

The process of enzyme secretion has several stimuli, he points out. The process may begin with the animals hunger – merely thinking of food. Or it can start while the animal is already eating and swallowing food. But if these digestive enzymes are released and start working while still inside the pancreas, says Dr. Goldstein, they will begin feeding on the organ itself, since it is also made of fat, protein and carbohydrate. Severe illness and even death may occur within a very short time.

A Mysterious Condition
Although it is the most common disorder of the feline pancreas, studies have indicated that pancreatitis occurs in less than two percent of the general cat population. Cats of both sexes and of all ages and breeds appear to be similarly vulnerable.

Its probably more prevalent, says Dr. Goldstein, but the problem is that we dont have a 100-percent perfect test to diagnose pancreatitis. I would think that the prevalence is a lot higher than we actually know.

The causes of pancreatitis also remain unknown. Something, perhaps a defect in an animals natural defense mechanisms, triggers this disease and results in digestion of the pancreatic tissue, says Dr. Goldstein. Some people believe it can be caused by too much fat in the diet or by ingestion of insecticides or other toxins.

Physical trauma – being hit by a car, for example, or falling from a great height – has been associated with the onset of this disease. Various disorders, such as feline infectious peritonitis, have also been cited as possible causes of pancreatitis, as have adverse drug reactions, inflammatory bowel disease and parasitic infection.

Clinical Signs
The most common clinical signs of feline pancreatitis include lethargy, loss of appetite, dehydration and low body temperature.

Cats with this disease typically dont vomit, says Dr. Goldstein, and they typically do not have abdominal pain. They just lie there like any other sick cat – theyre lethargic and they dont want to eat.

Cats suspected of having pancreatitis seem to have high levels of abdominal fluid, he adds, and they tend to have jaundice – a yellowish tinge to their skin, gums, whites of the eyes and the tissue inside their mouths. But these signs, he observes, are common in other disorders as well, such as liver disease.

Disease Progression
According to Dr. Goldstein, the disease can be either acute or chronic. Your cat can have a perfectly normal pancreas, he says, but then develop – for no apparent reason – a sudden, very acute, very severe case of the disease and may die as a result of that single acute attack. Or it may recover and never experience a problem with its pancreas again.

What often happens, however, is that a cat will recover from an initial acute attack and then develop chronic pancreatitis – minor and intermittent bouts of the disease over time. With each occurrence, there will be less inflammation, but there will be gradual scarring of the pancreatic tissue, which could eventually take its toll on the organs ability to function.

Diagnostic Measures
To be on the safe side, Dr. Goldstein advises, owners should seek veterinary counsel if a cat with a typically healthy appetite refuses to eat – even for just one day. The veterinarian may not do a lot of tests at first, he notes, but if the cat continues to be lethargic and doesnt resume eating within a day or two, this will be taken very seriously.

The standard diagnostic procedure, he says, will involve a medical history of the animal, thorough physical examination, bloodwork and possibly radiography (taking X-rays) or ultrasound. Radiography often does not yield a definitive diagnosis, however, he notes, since pancreatic abnormalities – indeed, the organ itself – are not readily perceptible on X-rays. But X-rays are sometimes useful in ruling out other disorders, such as an intestinal obstruction, which can have signs identical to those of pancreatitis.

As for ultrasound, he says: Various studies show that 30 percent to 50 percent of cases that we think are pancreatitis are picked up. On the other hand, not seeing it doesnt necessarily mean that its not present. The only way a sure diagnosis can be made is through a tissue sample (biopsy), he notes, but this involves a surgical procedure that may not be advisable for a seriously ailing animal.

So in a lot of cases, Dr. Goldstein says, you have to just make the assumption of pancreatitis based on the physical exam, bloodwork and ultrasound – and then you begin treatment. The trouble is, there is no uniformly effective, definitive treatment for feline pancreatitis, either.

Nevertheless, the cat will have to be hospitalized for several days at least while treatment proceeds and the animals health gradually improves and it resumes its normal eating habits. We cant withhold food, says Dr. Goldstein, because if we do that, the cat is at risk of developing serious liver disease. So we will feed the cat through tubes leading directly into its stomach, if necessary. The main goal is to make sure that the animal keeps getting its nutrition.

Doubtful Prognosis
In all cases, Dr. Goldstein says, prognosis is guarded. Pancreatitis can be a fatal disease, he says. The outcome depends not only on severity but also, unfortunately, on finances. How long can owners afford hospitalization, along with intravenous and tube feeding, which is very expensive?

Theres no way to treat severe feline pancreatitis on an outpatient basis, and extended 24-hour care can run into thousands of dollars.