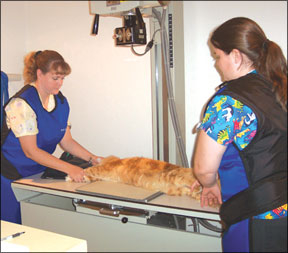 A healthy cats uniquely stunning physical traits – its power, agility and lightning-fast responses to external stimuli – are essentially attributable to its musculoskeletal system. In one way or another, this system is in operation 24 hours a day, whether a cat is hunting prey, escaping from predators, eating, drinking, napping, toying intently with a ball of yarn or digging its claws into your favorite piece of furniture.

Unfortunately, cats are subject to a veritable host of disorders that can impair or totally impede the smooth operations of this impressively complex array of bones, muscles, tendons, ligaments and other tissues. Owners should be aware of the systems basic structure, various functions, and signs of its impairment, such as a noticeably altered gait, an apparent weakness in the joints, and the inability to chew and swallow food easily. As is the case with other feline disorders, says Christine Bellezza, DVM, a consultant at Cornell Universitys College of Veterinary Medicines Feline Health Center, early recognition and diagnosis of a cats musculoskeletal disorder are likely to improve the chances for its successful treatment.

The musculoskeletal system provides shape and support to a cats entire body, from the tip of its nose to the tip of its tail. The feline skeleton – comprising 244 individual bones – supports 500 or so muscles and other soft tissues that effect movement and other bodily processes. These processes are enabled by the instantaneous transmission of electrical signals, largely via the peripheral nervous system, which is made up of nerves that extend, via the spinal cord, from a cats brain throughout its entire body.

Many of this nerve networks functions – such as the movement of an animals leg or the opening and closing of its mouth – are under conscious, voluntary control. Other functions are involuntary, such as those that control the muscles in the digestive tract and the heart. Some feline musculoskeletal problems may therefore stem from what are regarded as essentially neuromuscular disorders.

Among all feline musculoskeletal disorders, the most commonly seen by far are those associated with either arthritic disease or traumatic injury.

The most common form of feline arthritis is osteoarthritis, otherwise known as degenerative joint disease. This condition, especially prevalent in geriatric cats, is characterized by the erosion of cartilage, the smooth tissue that protects the ends of bones from rubbing directly against one another within a movable joint. When this protective tissue, for whatever reason, is worn or torn away completely, the bone ends come immediately in contact, and the persistent grinding of bone against bone results in inflammation and pain.

All joints in a cats body can be affected by osteoarthritis, but those that will become most visibly apparent to the owner are the movable joints, most often the shoulders and elbows. But the knees (stifles), the wrists (carpi) and the hips are also frequently affected. The outward signs will vary, depending on which joints are most painful, the extent of damage, and the animals age.

Most broken bones can be successfully repaired by a local veterinarian, the choice of methods depending primarily on which bone is broken and which type of fracture has occurred. A hairline fracture, for instance, may require only the use of bandages or splints, since the bone has not been displaced. Many fractures, however, will require surgery entailing the repositioning of the bone parts and their stabilization with any of a variety of plates, rods, wires or other orthopedic devices.

Fortunately, these and other acute and chronic musculoskeletal disorders are relatively rare in cats, especially when compared to the frequent incidence of feline arthritis and bone fractures.