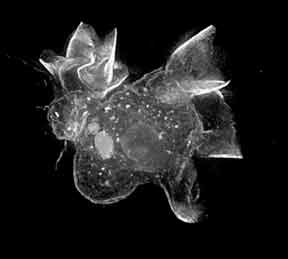 It’s common knowledge that pregnant women should avoid litter boxes to avoid contact with toxoplasma. The parasite found in cat feces can cause toxoplasmosis, a disease that may cause a number of developmental abnormalities in developing fetuses and neurologic, ocular and other potentially severe problems in people with compromised immune systems.

Research in recent years has shown an association between toxoplasmosis and schizophrenia, depression and anxiety. Studies also suggest that the disease can influence levels of human aggression, extroversion and risk-taking. Now a study by the Karolinska Institute in Sweden suggests a mechanism by which toxoplasma may influence the behavior of its hosts.

In this study, researchers found that human dendritic cells — an important part of the immune system — secreted the chemical gamma-aminobutyric acid (GABA) after being infected with toxoplasma. GABA inhibits feelings of fear and anxiety. Abnormalities of GABA metabolism have previously been demonstrated in people with depression, schizophrenia, bipolar diseases, anxiety syndrome and other mental health disorders. Previous research has also shown that rats infected with toxoplasma become unafraid of cats and are attracted by their scent, making them easy prey. The role of GABA in this toxoplamsa-induced behavioral change in cats was not investigated.

“For toxoplasma to make cells in the immune defense secrete GABA was as surprising as it was unexpected, and is very clever of the parasite,” says study leader Antonio Barragan, MD, Ph.D., a researcher at the Center for Infectious Medicine at Karolinska Institute and the Swedish Institute for Communicable Disease Control. “It would now be worth studying the links that exist between toxoplasmosis, the GABA systems and major public health threats.”

In another study, scientists infected mice with toxoplasma and then traced the movement of infected dendritic cells through the body, where it spread and continued to affect the GABA system, according to the results published in the scientific journal PLoS Pathogens.

“We’ve shown for the first time how the parasite behaves in the body of its host, by which I mean how it enters the brain and manipulates the host by taking over one of the brain’s neurotransmitters,” Dr. Barragan says.

However, he is careful to point out, “At the same time, it’s important to emphasize that humans have lived with this parasite for many millennia, so today’s carriers of toxoplasma need not be particularly worried.”

People contract the parasite by eating the undercooked flesh of infected animals or through contact with cat feces, but the immune system usually prevents them from becoming ill. Although cats usually shed the organism only for a few days after being infected, and the chance of human exposure is relatively small, a number of precautionary measures are recommended to reduce the chance of exposure, according to the Cornell Feline Health Center. For more information, please visit the center’s website at www.vet.cornell.edu/fhc/.

Keeping Them Safe
Pet owners who sign up for email alerts from the ASPCA will receive free Pet Safety Packs. They include an ASPCA Animal Poison Control magnet and a window decal alerting rescue personnel that pets are inside the home. For more information, use the keywords “pet safety pack” at www.aspca.org.