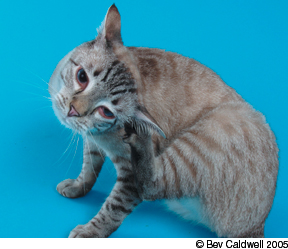 When functioning properly, feline ears are amazingly acute sensory organs – much more effective, for sure, than human ears. Thanks to their ultrasensitivity, a cats ears can capture frequencies as high as 60 kilohertz. By comparison, the upper end of the human auditory range is typically between 16 and 20 kilohertz.

A lot can go wrong with a cats ears, however, due to a variety of congenital or acquired conditions, with deafness among the potential consequences.

In most cases, the sooner an owner spots the signs of a feline hearing disorder and seeks veterinary counsel, the better the chances that the condition can be remedied or at least improved.

A Complex Organ
A cats ears, like those of other mammals, are made up of three structural areas: the outer, middle and inner ear.

u The outer ear consists of the external earflap (pinna), and the ear canal – a narrow, tubular passage through which sound vibrations enter the ear from the outside environment.

u The middle ear contains the eardrum, a taut membrane that vibrates in correspondence to the incoming sound waves, and the auditory ossicles, small bones that transmit the eardrum vibrations to the inner ear.

u The inner ear, located deeper within the skull, contains the cochlea. This is a snail-shaped structure containing sensing devices that receives the vibrations, converts them to nerve signals, and passes them along to the brain, thereby enabling a cats hearing. The inner ear also contains structures that play a role in regulating a cats equilibrium.

Inherited Conditions
There are a few genetically transferred ear conditions, but they do not necessarily cause hearing loss. One condition is known as fold-ears, in which the tip of a cats pinna is bent either into the ear (as in Scottish fold cats) or away from the skull (as in American curl cats). These inherited traits are not associated with hearing loss. Another heritable abnormality is a blockage of the ear canal. This condition, called atresia, usually does not cause significant hearing problems.

Some cats are born deaf – especially pure white animals – and the disability cannot be corrected. Not all white cats are destined to have hearing problems, however, and those that are born with the disorder are not necessarily deaf in both ears.

Acquired Conditions
Most ear conditions by far are acquired. A cat that fights a lot or is in the habit of scratching its ears excessively, for example, might experience hematoma, a collection of blood from broken vessels that collects between the skin covering the ear and the underlying cartilage. A severe hematoma may result in a permanently deformed earflap. Various polyps, tumors and cancers can also affect cats ears and cause hearing impairment.

Of all acquired feline ear conditions, the most common by far is otitis externa, an inflammation of the outer ear canal that, if untreated, can damage the eardrum and progress to the inner ear, affecting both hearing and balance.

This condition is most prevalent and potentially dangerous in breeds that are more susceptible to skin ailments such as seborrhea, which stems from excess oily secretions from the sebaceous glands that result in the accumulation of surplus ear wax. This wax provides a medium in which invading bacteria and other microorganisms can flourish.

All ears have bacteria and yeast in them in small numbers, says William Miller Jr., VMD, a professor of dermatology and medical director of the Companion Animal Hospital at Cornell Universitys College of Veterinary Medicine. Its just part of the natural flora. But if something changes the climate in the ear, the organisms begin to multiply and become too numerous – and you end up with infection.

Besides overproduction of earwax, he notes, infection-causing alterations of the ears microclimate include systemic disorders, allergies and infection with feline immunodeficiency virus, and the presence of tumors or foreign objects in the ear canal.

If otitis externa is not appropriately treated, inflammation can spread to the middle ear, where it is termed otitis media, and to the inner ear (otitis interna). In the most severe cases, the inner ear can be irreparably damaged, resulting in deafness and balance abnormalities on the affected side or sides.

The Major Cause
The most common cause of feline otitis externa and its frequently unhappy consequences is the ear mite, otherwise known as Otodectes cynotis.

Ear mites are almost microscopically tiny – about the size of a very small pinhead, says Dr. Miller, although its possible to see their minuscule, rapidly moving bodies with the naked eye, especially if you are examining a black cat. The mites are also detectable by the unpleasant mess they make inside an infested animals ear canal – a dark, coffee ground-like accumulation of wax and debris in which the spiderlike creatures thrive.

Ear mites are extremely contagious, moving from one cat to another on close contact and eventually making their way to the ear. Infestation is most common among outdoor cats, whether theyre brawling or curling up together affectionately.

Signs of Infestation
The usual signs of ear mite infestation are clear: The outer ear is likely to be inflamed, and the animal will hold its ears flat against its head, scratch at them almost without letup, and shake its head frequently – as if trying to dislodge a bothersome object.

Some cats may tilt the head to one side, shake it persistently, and scratch at one or both ears. The animal may walk unsteadily and appear to stumble. It may behave in an uncharacteristically lethargic manner and may respond as if in pain when you touch its ears. If you are near enough to the animal, you may see that the skin on the underside of its ears is abraded and inflamed and that a black discharge has collected in the area.

Inside Information
Diagnosis of otitis externa will usually entail a review of an animals medical history and a thorough physical examination, with special attention given to the affected ear or ears. For this, the veterinarian is likely to use an otoscope, a flashlight-like instrument that provides a magnified view of the ears inner depths. This device will reveal the extent to which an ear canal is swollen or blocked and whether the ear drum is intact or damaged. (In some cases, the use of an otoscope may be painful, and the animal will have to be sedated or anesthetized for the procedure.)

In addition, a definitive diagnosis will often require a microscopic examination or culture of material that has collected in the ear canal. This will help determine the type of medication that should be used to treat the disorder.

Typical Treatment
Treatment of a fungal or bacterial infection, or of an ear mite infestation, says Dr. Miller, is usually a simple matter, involving the use of antibiotics, antifungal medications or insecticides, respectively. But if you dont identify the cause and deal with it appropriately, he points out, the inflammation may be remedied – but will come right back after the treatment is stopped.

Treatment typically begins with a thorough cleaning of the cats ears to remove any wax or debris that may shield the offending organisms from topical medications. There are hundreds of topical, oral and systemic agents, Dr. Miller notes, and most of them are highly effective.

Subsequent treatment of otitis externa – as well as ongoing maintenance of a cats ears, says Dr. Miller, can generally be done at home – as long as the owner has been given proper instruction by the veterinarian.

In most instances, an afflicted cat will respond well to treatment and recover fully within a few days or a week. However, Dr. Miller adds, cases of chronic infection may defy treatment of any kind.

When a cat has had recurring otitis externa, he says, the tissue lining the ear canal may become so thickened that you cant even insert an otoscope. In that case, surgery to correct that problem may be the only treatment option.