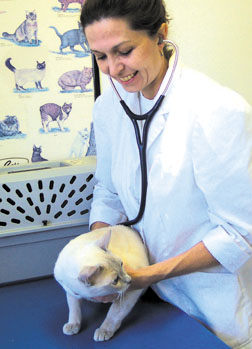 Brainwise, your cat seems to be normal in every respect – no tumors, no infections that might impair its neurologic functioning and no history of brain trauma. Yet, every once in a while, it has what is commonly referred to as a seizure, a disorder that is, in essence, an electrical disturbance in the brain.

Dr. Charles Vite, DVM, an assistant professor of neurology at the University of Pennsylvanias School of Veterinary Medicine, describes the phenomenon as follows: The cat has a dull look about it and starts to act oddly – a bit spacey. And then, within a few seconds, it goes into a convulsion. It becomes stiff, and its lips are pulled back on its teeth, and the teeth may be chattering. It may urinate, maybe even defecate. Then, after a minute or two, the seizure will end. The animals muscles will relax. It will start behaving normally again. And it will look normal.

In some cases, he adds, the seizure will take another form, less startling but no less puzzling. The cat will be acting all right, says Dr. Vite, and then suddenly start behaving sort of like a robot, staring straight ahead and pacing in large circles. For a minute or two, it wont respond to its owner – and then it will suddenly snap out of its trance.

Lethal Potential
Any cat, for any of several reasons, may have a seizure during its lifetime. But if attacks occur repeatedly – recurring regularly over days, weeks, or months – the cat is said to be suffering from epilepsy. The term epileptic, explains Dr. Vite, means that the seizures are multiple. The terms are synonymous.

Epileptic seizures, as frightening as they are to witness, are rarely fatal to cats. The ones that are life-threatening, he says, are those that last for a half-hour or hour. In those instances, death can result from a lethally high body temperature or from impaired breathing. The other potentially deadly kind of seizure is one that occurs as the result of an untreated metabolic disorder or a cancer or when a cat is high up off the ground – in a tree, for example – and falls when the seizure occurs.

Types of Epilepsy
All epileptic seizures are neurologic phenomena that stem from defects in the electrical transmission of nerve signals, or impulses, within the cerebral cortex, the area of the brain responsible for thought, memory, sensation and voluntary muscle movement. Seizures are generally classified in two categories:

Idiopathic (or primary) seizures are those that occur for no discernible reason. There are no brain lesions, no metabolic disease, no infection, says Dr. Vite. There is an electrical abnormality in the brain, but we cannot determine why it is present.

Symptomatic (or secondary) seizures, on the other hand, are the result of disorders either in a cats brain, such as a head injury or a tumor causing excessive intracranial pressure; or elsewhere in its body, such as low blood sugar, overheating or serious viral infection.

When a seizure lasts for several minutes or more and involves loss of consciousness and involuntary muscle contractions throughout a cats entire body, it is called a generalized seizure. Less serious is a partial seizure, which is of comparatively short duration and is characterized by vague, aimless, trancelike behavior.

Risk Factors
The incidence of epilepsy is infrequent in cats, compared to its occurrence in humans or dogs. Age is a risk factor, says Dr. Vite. In cats between one and five years of age, he says, the seizures may be idiopathic – we dont know the cause. In animals younger than one year of age or older than five, there is usually a secondary cause, such as a brain tumor, an infection or a metabolic problem.

There is no evidence that epilepsy is more common in some breeds than it is in others, he adds, and males and females appear to be equally at risk. Outdoor cats may be at elevated risk for secondary epilepsy due to their increased exposure to infectious agents and greater tendency to suffer head injuries. Both indoor and outdoor cats are equally at risk for idiopathic epilepsy.

Seeking Guidance
An owner whose cat experiences a single, isolated generalized seizure or seems to be displaying odd behavior resembling a partial seizure should seek veterinary counsel, advises Dr. Vite. In these instances, make a phone call and let the veterinarian decide the course of action, he says.

If an animal has a seizure that lasts for more than two minutes or has more than two seizures in a 24-hour period, thats an emergency situation, and you should take the cat to your veterinarian immediately.

He notes that most veterinarians in general practice are very well qualified to handle cases of feline epilepsy, although cases in which the condition is resistant to standard treatment and in which seizures remain uncontrolled – that is, occurring more than once every two months or so – may require the services of a veterinary neurologist.

Seizure Treatment
At a veterinary clinic, all cats presenting with the signs of epilepsy will first undergo a complete blood count and blood chemistry analysis. Then, says Dr. Vite, well talk with the owner about some kind of imaging – usually an MRI – and a spinal tap. This can get expensive – an MRI can cost $1,000 and a spinal tap about $200. But because of the low incidence of idiopathic epilepsy in cats, theres a very good chance that the condition is secondary to something like diabetes, feline infectious peritonitis, or some other metabolic or neoplastic disease. And we want to identify that specific disorder.

If we do identify the cause, the cat will receive therapy for that specific disease process. If the owner is unable to afford an MRI, spinal tap or other diagnostic measures, then well proceed to treat the animals seizures on the basis of the bloodwork and chemistry panel alone.

Medicinal Treatment
According to Dr. Vite, phenobarbital – given orally two or three times a day – is generally the drug of choice for treating idiopathic feline epilepsy. Cats do very well on phenobarbital, says Dr. Vite, although an animal may experience mild side effects such as excessive eating, drinking and urinating during the first few weeks of taking it.

The prognosis is generally pretty good for epileptic cats on phenobarbital, he says. The seizures usually get much less frequent and less severe. If they persist, the medication will have to be continued permanently. But if the seizures disappear for a few years, well try to gradually wean a cat off the drug. Phenobarbital pills are inexpensive, he notes, generally costing less than $20 per month.

Advice to Owners
What should a cats owner do in the event of a generalized seizure? If possible, hold the cat in your arms and try to calm it down, says Dr. Vite. But dont get near its mouth. If you try to move its tongue away with your fingers in order to help it breathe, the cat may bite down on them and not let go. So this is not a good idea.

If the cat feels very warm, you may try to reduce its body temperature by putting a little alcohol on its foot pads or misting the animal with a bit of cool water.

And when the seizure seems to be over and the animal seems to be normal, call your veterinarian for advice. If the cat has another seizure within a short time, get it to the veterinarian right away.