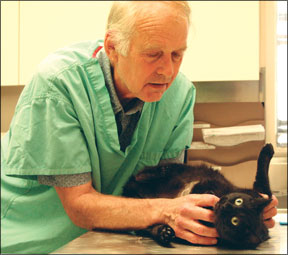 Cats come in a wide variety of shapes and sizes, and the range of their behavioral characteristics is similarly broad. The same can be said about the array of tumors (neoplasms) that can develop within the feline body. Some are small, others are large; some naturally tend to pass the time quietly ensconced in one spot,

while others are destined to roam; some are benign by nature, while others behave very badly indeed, causing no end of damage.

A tumor is an uncontrolled proliferation of cells that have become unresponsive to the regulatory signals that would normally control their growth. These cell masses, points out Margaret McEntee, DVM, an associate professor of oncology at Cornell Universitys College of Veterinary Medicine, “have no purpose or function.”

Feline tumors may be categorized according to various criteria the type of cells involved, for example, or the area of a cats body that is affected. All tumors, however, can be placed into two general categories: They are either benign or they are malignant.

In general, benign tumors develop slowly; they do not infiltrate neighboring tissues or spread (metastasize) to other areas of the body; and they are frequently amenable to surgical removal. The most common site for the development of a benign tumor in cats, says Dr. McEntee, is the skin. “These growths usually involve the skins basal cells or in some cases the mast cells,” she notes, “and they are usually well behaved, manifesting as a raised mass a small lump or bump on the skin surface or just beneath it. In some cases, the surface of the mass will be ulcerated and bleeding, and there may be hair loss around it.”

In most cases, Dr. McEntee says, it is advisable to remove a benign skin tumor surgically, even though it may appear to be harmless. “We dont often leave skin masses alone in cats,” she notes. “They are especially dangerous around the eyes and ears, where a cat can scratch at them. And if they become open wounds, they provide a way for bacteria to enter an animals system.”

Benign tumors can also develop internally, she adds, and there are areas of the feline body where they can present major problems. In particular, any tumor that grows on the meninges (the membranes covering the brain) can be life-threatening if it grows large and puts pressure on the brain.

Diagnosis of a benign tumor is usually achieved by withdrawing cells from the growth by means of a needle aspirate and examining them under a microscope. “Or,” says Dr. McEntee, “we may do an excisional biopsy, which involves removing all of the growth and submitting the sample for histopathologic analysis.” Treating a benign tumor usually entails surgical removal, followed in some cases by radiation therapy.

If undetected and untreated until it has progressed to an advanced stage, a malignant tumor typically referred to as a cancer is marked by the uncontrolled proliferation of cells in an animals bodily tissues and is likely to be fatal. These neoplasms can develop in almost any area of a cats anatomy. The most frequently observed feline cancers are:

Typical early signs of feline lymphoma include enlarged internal organs, diarrhea, vomiting and weight loss. One of the most common sites of involvement is the intestinal tract. If untreated, the disease will inevitably spread throughout the lymphatic system, causing the animal to weaken gradually and finally to die.

Skin cancer, which usually emerges in the form of small skin growths that spread uncontrollably and invade other tissues and organs. One common type of this disease is squamous cell carcinoma, which affects the flat, scaly cells in the outer layer of skin and is most often the result of prolonged exposure to sunlight. Another type of cancer associated with the skin injection-site sarcoma can originate at the site of vaccination (see sidebar).

At high risk for skin cancer are white or light-colored cats, and the areas of the body most often affected are those that are lightly pigmented, such as the nose, eyelids and tips of the ears. Outdoor cats that habitually bask in bright sunlight and are thus excessively exposed to potentially damaging ultraviolet light rays are at greatest risk.

Mammary gland cancer, which is most often a disease of older, unspayed female cats, is characterized by tumors that develop beneath a nipple and may eventually spread to the lymph nodes, lungs, liver and other areas of the body.

The earliest signs of this cancer are noticeable lumps in an animals mammary area, which can often be detected by routine palpation of a cats underside. Mammary gland cancer is potentially avoidable, since its occurrence may be prevented by spaying a female cat at an early age.

Less frequently seen feline cancers include those affecting the oral cavity, liver and bones. As soon as a veterinarian notices evidence of any malignancy during the course of a routine physical exam, a number of sophisticated diagnostic procedures may be implemented in order to rule out cancer or to determine which type of the disease is present.

In addition to a blood cell count, blood chemistry panel, and urinalysis, says Dr. McEntee, a veterinarian may order various microscopic cell and tissue evaluations and imaging procedures. If a malignancy is diagnosed, treatment will depend largely on the type of cancer, its location, and the stage to which it has progressed. v