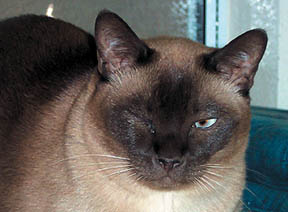 In most respects, your cat is in perfect health – except for one very troubling matter: Every four or five months, she goes through phases of serious physical distress, with signs that include wheezing, sneezing, nasal congestion and watery eyes. These debilitating signs persist for a week or 10 days – and then abruptly disappear. What in the world could be wrong with her?

Clearly, the animal is suffering from an upper respiratory infection (URI), a disease affecting the nose, sinuses, pharynx and larynx – the structures that filter, heat and humidify inhaled air before it flows to the lungs. In your cats case, the condition is probably attributable to a virus that lies dormant in her system most of the time but periodically – after months or even years – becomes temporarily active, prompts the emergence of the unpleasant signs, and then goes back to sleep.

Disease Progression
Although the primary signs of URI are troublesome, they are generally transitory and self-limiting – they just come and go without causing enduring harm. However, according to Richard Goldstein, DVM, they can progress to secondary complications with long-lasting and potentially severe consequences.

These include pneumonia, conjunctivitis (a vision-impairing eye condition), and a host of other bacteria- and virus-borne illnesses resulting from the entry of infectious microorganisms into an afflicted cats system via the open sores that often break out inside its mouth and on its nose, lips and tongue.

In addition, says Dr. Goldstein – an assistant professor of small animal medicine at Cornell Universitys College of Veterinary Medicine – some cats may refuse to eat because of the painful ulcerations in their mouths. Without intensive supportive care, he says, these cats may just dwindle away and die.

Prime Causes
The great majority of URI cases (an estimated 90 percent) are caused by either or both of two viruses: feline herpesvirus – also known as feline rhinotracheitis virus (FRV); and feline calicivirus (FCV). These organisms are very specific to cats, including wild felines, Dr. Goldstein points out. Theyve been known to cause big problems for lions and tigers in zoos as well as for house cats. (Neither virus is transmissible to humans or dogs, he notes.) A third and far less frequent cause of URI is Chlamydophilia felis, a bacterial agent that is associated especially with the onset of conjunctivitis.

Once they are present in a cats system, no medication can make the viruses simply disappear. In time – perhaps after many months or even years but usually, according to Dr. Goldstein, after a few weeks – calicivirus will vanish, but not until it has done significant damage to a cats upper respiratory system and has opened the pathways for secondary infection. On the other hand, says Dr. Goldstein, herpesvirus, once present in the feline system, remains forever. For the remainder of the animals life, he says, herpesvirus will continue to flare up repeatedly, like the way cold sores break out from time to time on the lips of humans who carry a herpesvirus. In cats, these eruptions can be brought on by such things as stress, bad weather or the outbreak of some other illness.

At Greatest Risk
For the past several decades, vaccines have been available that, to a great extent, protect cats against herpesvirus, calicivirus and Chlamydophila bacterium, and these vaccines have, over the years, proven successful in reducing the severity of disease caused by these agents. However, outbreaks of upper respiratory disease continue to threaten feral cats and are a major concern in animal shelters.

Although infections are rarely fatal, they are especially threatening to kittens, to older cats and to cats whose immune systems are busy trying to fight off problems caused by some other disease. Any cat can get it at any age, says Dr. Goldstein, but we see the really severe infections in kittens born to queens who have not been inoculated and are left to fend for themselves in wet, cold weather. Thats when their resistance is impaired and they are likely to get sick.

The Most Vulnerable
The classic case, he says, is an orphaned kitten younger than six weeks of age that lives in poor conditions and has not gotten a proper immune boost by nursing immediately after its birth to a vaccinated queen. The first milk of a queen, Dr. Goldstein, points out, contains colostrum, a substance rich in antibodies that provide temporary protection against infection.

Kittens who for some reason are deprived of that protection, he says, tend to get the disease in its severest form. They can lose their eyes because of ulcers, they may not be able to breathe, and they may die from pneumonia or another secondary infection that goes into their blood.

On the contrary, he points out, a kitten born to a vaccinated queen and living in a dry, warm environment is unlikely to get URI even if it is exposed to a viral agent. And even if the kitten does get sick, he says, it will usually be a mild type of illness that lasts for just a couple of days.

Facing the Threat
Diagnosis is arrived at by observing the clinical signs, notes Dr. Goldstein. When you see it, you know its an upper respiratory problem, he says, but you dont know for sure which virus has caused it or what kind of bacteria are responsible for a secondary infection. So most times we treat the cat symptomatically, give it antibiotics for any secondary infection, and keep the animal hydrated, fed and comfortable.

In some instances, he adds, a herpesvirus – isolated from a cats cornea – may be identified. In severe cases, a medication can then be administered that will shorten the time that the virus is active. There is no such treatment for the calicivirus, however. It just has to go away by itself, says Dr. Goldstein.

Routine Vaccination
To reduce the spread of URI, he advises, owners should make sure that all cats are vaccinated according to schedules recommended by veterinary experts. In general, a vaccine designed to protect against both herpesvirus and calicivirus should be administered when a kitten is between six and eight weeks of age (when the natural immunity they have received through colostrum-rich mothers milk is diminishing).

Follow-up vaccinations are then recommended at three- to four-week intervals until a kitten is 12 weeks old. Vaccination is repeated a year later, then every three years thereafter. (There is a vaccine to protect against Chlamydophila as well, although it is not as urgently recommended since these bacterial infections are comparatively rare.) Unfortunately, says Dr. Goldstein, no vaccine is 100 percent effective: Although all existing vaccines are apt to reduce the severity of viral infection, none can be guaranteed to immunize all cats against the organisms that cause URI. Also, he points out, new strains of caliciviruses are continually developing and, therefore, the efficacy of current vaccines may diminish as time goes by.

So if a new strain comes along, he says, you may not get full protection. But you should have your cats vaccinated anyway – its better than nothing.