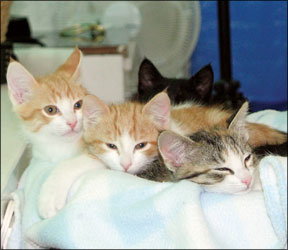 Perhaps the only thing sadder than the sight of a tiny kitten suffering from a bout of gut-wrenching diarrhea is the sight of three or four of them, piled on top of each other in a cramped cage, all in the throes of debilitating, possibly life-threatening intestinal damage. That, unfortunately, is what may occur in an

This microorganism is a normal inhabitant of the mammalian intestinal tract, especially that portion of the tract known as the jejunum – hence its scientific name. More commonly referred to as Campylobacter, the bacterium can be found in cows, sheep, ferrets and many other domestic and wild animal species. Also found in poultry, Campylobacter is recognized as one of the major bacterial causes of diarrhea in humans.

“There are many other kinds of bacteria that can cause severe intestinal cramps and diarrhea in humans, felines and other mammals,” notes Patrick McDonough, PhD, associate professor of bacteriology and mycology at Cornell Universitys College of Veterinary Medicine. He cites, for example, E. coli and Salmonella, as well as several other types of Campylobacter. “But Campylobacter jejuni,” he states, “is the one that were most concerned about in cats.”

exists nowhere in nature other than in an infected creatures gut, and its presence does not always cause diarrhea and cramps. However, says Dr. McDonough, “you have to worry about carriers” – cats that are asymptomatic but harbor the bacterium and shed it in their feces. (Studies have indicated that nearly half of all domestic cats may be such carriers of the bacteria.) He explains: “Cats are not born with Campylobacter in their intestines. But they can pick it up in several different ways. A newborn kitten can get it if its birthing environment is unclean. A kitten, especially in a crowded and unsanitary environment, can get it as the result of fecal contamination. Or it can get it by nursing from a contaminated queen whose nipples are unclean.”

Campylobacter or by consuming contaminated milk or uncooked meat from a carrier cow, pig, lamb or other mammal. Since chickens, turkeys and other fowl also host the bacteria, a cat can become infected by eating uncooked poultry. Contaminated water and even contact with the surface of a bacteria-laden object – a toy, say, or a feeding bowl – can spread the disease as well.

The resulting infection, called campylobacteriosis, takes only a short time to start producing the typical signs – intermittent diarrhea and cramping in older cats and kittens that have been weaned; and watery diarrhea, diminished appetite, fever and vomiting in recently born kittens. If these signs do appear at all, they will do so once the bacteria are established in an animals intestine and have passed through their incubation period. “In mature cats,” says Dr. McDonough, “the incubation period would take only two or three days at most. In kittens, youd see the signs sooner than that – a day or two at the outside.”

Diagnosis is achieved by means of a bacterial culture aimed at ruling out other possible conditions, such as parasitic infection. But most cases of campylobacteriosis remain undiagnosed – and untreated, for that matter – because the typical disease course endures for only a few days. In any case, says Dr. McDonough, the disease is not likely to be fatal except in the case of newborn kittens whose immune systems are not yet fully developed, and whose gastrointestinal tracts are not yet populated with the flora that naturally protect against invasion by potential disease agents.

Also at elevated risk for lethal disease progression are older cats with concurrent diseases, especially those whose suppressed immune response is compromised as the result of infection with feline immunodeficiency virus (FIV) or feline leukemia virus (FeLV). Moreover, cats of any age are at risk for severe

Campylobacter-related illness if their nutrition is poor and they are starving and stressed as a result.

Since most mild cases of campylobacteriosis are self-limiting and of brief duration, they do not require treatment. Severe cases, however, require immediate veterinary attention, which is likely to entail antibiotic medication and intravenous therapy to replace fluids and restore proper electrolyte balance.

Humans can get the disease by coming into direct contact with a cat that is carrying the bacteria. In fact, says Dr. McDonough,

Campylobacter infection is probably more common than Salmonella infection, which yields similar clinical signs. “The disease course in an adult human,” he says, “is about the same – diarrhea, severe cramps and vomiting.”

Dr. McDonough advises cat owners to seek veterinary care if they observe any signs of campylobacteriosis in animals of any age. To prevent infection, keep the cats environment clean and free of fecal litter. Avoid feeding the animal raw meat or poultry. And if

Campylobacter infection is suspected or diagnosed, owners must avoid touching their cats. If they do, they must be sure to wash their hands thoroughly afterwards.v