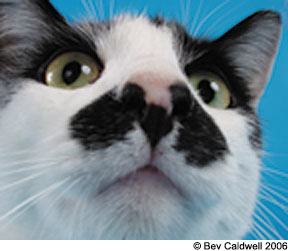 Kittys got the sniffles? Its probably nothing to worry about. Just like you, your cat is apt to come down with a minor respiratory infection now and then, and it will pass. But if the runny nose that you notice goes on for more than a few days, and especially if the secretions thicken and become darker in color, youll be wise to have your veterinarian take a look at the animal.

Persistent discharge is among the most common indications that a cat may have one of several serious feline nasal diseases. Some of these disorders are confined to the nose, while others may eventually affect the entire body. And while some of these conditions are easily reversible if treated promptly and effectively, others may be incurable. Indeed, they may be the source of permanently recurring discomfort and disability. In some cases, they could prove fatal.

Form and Function
A cats nose is a complex structure. Its interior – the nasal cavity – is enclosed by bone and cartilage and is divided into two narrow compartments by a thin wall of hard tissue (the septum), with each compartment subdivided into two additional areas. Also lying within the nasal cavity are several hollow, moisture-secreting spaces called sinuses. At the back of the cavity, the two nasal passages open into the throat (pharynx), which, in turn, leads to the larynx (voice box) and two larger tubes – the trachea, which goes to the lungs, and the esophagus, which goes to the stomach.

The nasal cavity functions most importantly as the gateway to a cats respiratory system, the portal through which oxygen-rich air is inhaled and filtered before passing to the lungs and through which oxygen-depleted air is exhaled. Most of the inside of the nasal cavity has a surface that is scroll-like in structure and is lined with a mucus-secreting tissue (mucosa), notes Margaret McEntee, DVM, an associate professor of oncology at Cornell Universitys College of Veterinary Medicine. This provides an efficient filtration system, she explains. Particles in inhaled air that should not get into the lungs come in contact with the mucosa and get trapped there. And the scroll-like structure of the nasal cavity tissue increases its surface area.

In addition to filtering incoming air, the nasal cavity serves to humidify and warm the vapors appropriately before they pass through the trachea to the lungs. Moreover, a properly functioning nasal cavity plays a nutritional role. Cats like to smell what they eat, says Dr. McEntee, and if a nasal disease affects an animals ability to smell, it may go off its food and not get the nourishment it needs.

Various Disorders
Cats are subject to a wide range of nasal disorders, some significantly more treatable than others. Malignant cancers that originate in the nasal cavity, for example, are likely to cause extensive local obstruction and destruction of the nasal cavity, but if diagnosed early, these cancers can respond well to radiation therapy. The removal of noncancerous masses of inflammatory tissue (polyps) that develop in and clog the nasal passages will typically require extensive surgery, which is often successful. And foreign bodies, such as a piece of thread or blade of grass, can become lodged in the nasal cavity and interfere with an animals intake of air, requiring removal by a veterinarian.

The most frequently observed nasal disorders in cats, however, develop as the result of upper respiratory tract infections with one or both of two viruses – feline herpesvirus (FHV) and feline calicivirus (FCV) – although, says Dr. McEntee, other organisms can be in play, such as fungi and bacteria, including Chlamydia. To complicate matters, she notes, infection with feline immunodeficiency virus (FIV) and feline leukemia virus (FeLV), although not directly associated with nasal disease, may compromise an animals immune system and thus make it more susceptible to upper airway infection.

The most telling sign of a viral, bacterial or fungal infection is persistent discharge from an affected animals nose. At the beginning, says Dr. McEntee, the discharge is clear and watery, but as the infection progresses, the fluid will carry increasing amounts of mucus and pus and will become thick, opaque and yellowish-green. And if the infectious organism has caused enough damage, you may see some blood in the discharge, because the capillaries are close to the mucosal surface. Progression of the disease, she notes, can occur very rapidly – within days – and, if untreated, such a disorder can sometimes spread dangerously throughout the entire respiratory system.

Vigilant Care
In addition to a chronically runny nose, the common signs of feline nasal disease include teary eyes, breathing through the mouth, and sneezing. Be aware of what signs to look for,  Dr. McEntee advises owners, and how to describe them so that you can be clear when discussing the condition with your veterinarian. When did the signs first appear? How did they progress? Is the discharge coming from the right or left nostril, or both? What does the discharge look like – is it thin or thick, light or dark? Is there any blood in it?

If your cat sneezes once or twice, thats not a big deal. But if it is sneezing every day, you should start keeping track on a calendar of how the signs are progressing. Above all, Dr. McEntee urges owners to have their cats vaccinated against FHV, FCV and other viruses according to current veterinary guidelines.