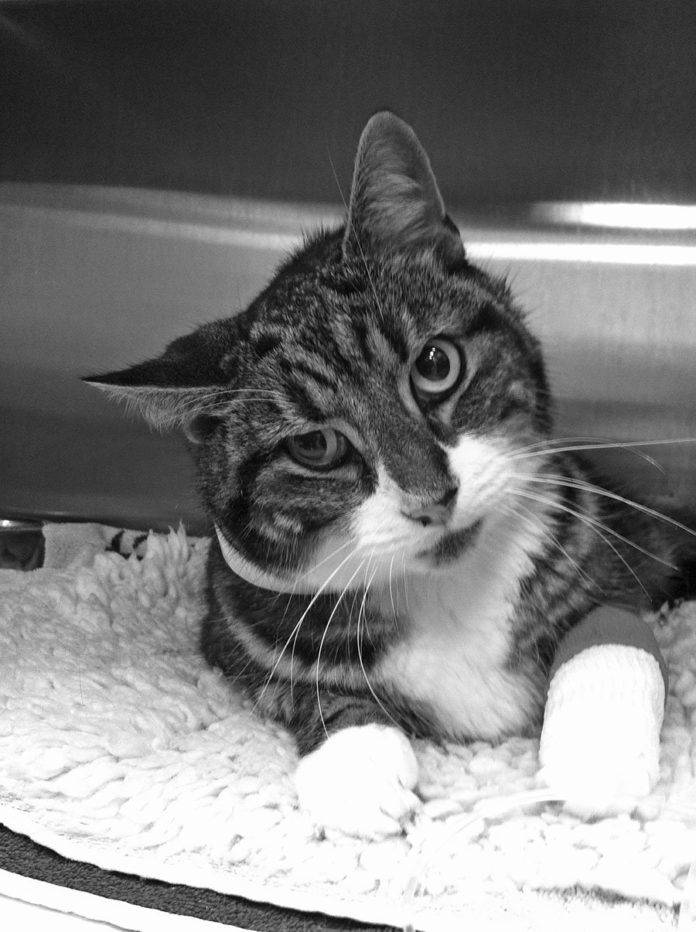 Seeing your once-graceful cat suddenly stumbling with his head tilted and eyes darting wildly can be frightening. These signs are associated with vestibular syndrome, a fairly common problem with a variety of causes and occasionally only temporary signs.

Darting eye movements can be present at birth in blue-eyed color point breeds — those having a darker color on their tail, legs, ears and face, such as Siamese and Himalayan, but they are not related to vestibular syndrome. In the case of the syndrome, the eye movements are more likely due to an underlying condition such as infection, polyps, stroke, cancer, inflammation or drug toxicity, especially to certain antibiotics.

Aging cats seem particularly susceptible. “We tend to see more vestibular issues among middle-aged or older animals, as cancer and strokes tend to affect those animals,” says Emma S. Davies, BVSc, MSc, ECVN, Senior Lecturer in Neurology at Cornell University College of Veterinary Medicine. “However, cats can have ear infections throughout their lives. And cats develop polyps that can affect the middle ear more commonly when they are 1 to 5 years old and both can lead to this syndrome.”

Vestibular syndrome is a balance system problem that causes cats to lose orientation. “The nervous system is similar to the wiring in a car,” Dr. Davies says. “For example, if there’s an issue in the car’s light circuit, the problem can occur anywhere in the circuit. However, what we see is that the lights do not work. By testing parts of the circuit or nearby circuits in animals with problems affecting the vestibular system, we can often work out whether the problem is outside or inside the brain.”

In addition to ear infections and inflammation, the parasite cuterebra can cause the sudden onset of vestibular syndrome. In areas where cuterebra larvae of the adult botfly are endemic — primarily in the Northeast — the larva can enter through the nose and move to the brain, where it may cause neurological damage. Outdoor cats are particularly at risk, but indoor cats can be affected. A cuterebra infection is treatable with veterinary-prescribed anti-parasitic and other medications.

In some young cats, feline infectious peritonitis (FIP), a viral disease caused by certain strains of the feline coronavirus, may result in vestibular syndrome. “This difficult, largely fatal disease is transmitted via other infected cats and is more common among purebreds,” Dr. Davies says. “Although the coronavirus is common, it mutates to cause FIP only in a small proportion of cats.”

When ear disease is the cause of the cat’s disorientation, he may have a history of ear infections. The signs of ear infection include head shaking and occasional discharge from the ears. Otherwise, the earliest sign of vestibular disease may be falling, anorexia, staggering, hypersalivation and vomiting. “Often, all the symptoms start simultaneously,” Dr. Davies says.

Owners should take their cat for a veterinary examination as soon as they see any of these signs. “Regardless of the cause, pets can benefit from anti-nausea medications,” Dr. Davies says. “Affected animals feel terribly sick as a result of their lack of balance. I imagine it’s like being on an amusement park ride that whirls you around 10 times in a row.”

A primary care veterinarian can examine the ear canal for signs of polyps or infection; however, these signs are not always visible. The owner may be referred to a veterinary neurologist for a CT or MRI scan. Images of the patient’s head may reveal polyps or provide further clues, such as evidence of a stroke. An MRI can also rule out other causes.

“Even if an MRI is not affordable, a simple observation by a veterinary neurologist may be able to give you some ideas about what’s going on with your pet,” Dr. Davies says. A spinal tap of cerebrospinal fluid after imaging might be the next diagnostic step to look for inflammatory or cancer cells.

“If an ear polyp or an abscess is causing the illness, then ear surgery can effectively remove the polyp or drain the infection,” Dr. Davies says, adding that, while strokes often resolve on their own, veterinary attention may prevent the animal from having another stroke.

“I recently treated an 11-year-old cat who had stopped eating and felt terrible,” Dr. Davies says. “We discovered infections in both ears. The surgical treatment [performed by a small animal specialist] is called a ventral bulla [middle ear] osteotomy. This involves making a hole in the bottom of the bulla and cleaning it out, which allows the infection to drain. After this surgery on both ears, the cat recovered nicely and began eating again.”

If vestibular syndrome is the result of a stroke or an ear disorder that can be surgically remediated, the immediate prognosis is usually good. For cats affected by the cuterebra parasite, the prognosis may also be favorable.

Even after treatment, some cats occasionally exhibit some residual head tilting. “However, if the infection is resolved, they seem to compensate rapidly and do not show signs of any distress from it. They may still be able to run and play, but their balance won’t be as good,” Dr. Davies says.

Many researchers are studying the causes of vestibular syndrome, such as inflammatory disease, coronavirus infection and skin disease, Dr. Davies says. Until more is known about the disorder, she advises owners to be alert to their cat’s behavior. “At the first sign of vestibular syndrome, seek veterinary attention. Once you know what’s going on, you can better know how to treat it.”