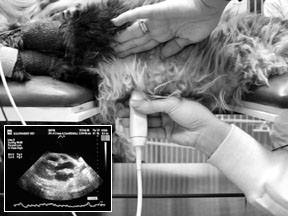 A malfunctioning myocardium will dampen its spirits for sure – and may shorten its life. The typical cat has a strong heart – strong enough, at least, to get it through a decade or two of meowing and mischief. Some cats, however, are not so blessed. Due to a condition called cardiomyopathy, many will ascend to the great feline beyond well ahead of their time.

Cardiomyopathy literally means disease of the heart muscle – the myocardium. The feline heart, just like the human heart, is a hollow, muscular organ located in the center of the animals chest. The right and left side of the organ each has an upper chamber (atrium), which collects circulating blood, and a lower chamber (ventricle), which pumps blood from the heart.

Broadly speaking, cardiomyopathy is brought about by a structural abnormality in the tissue enclosing one or more of these four chambers. The muscle grows too thick, or it stretches and becomes too thin. In either case, the abnormality sets the organs blood-collecting and blood-pumping mechanics awry, a dysfunction that often leads to respiratory distress, paralysis-causing blood clots, congestive heart failure, and, in some cases, sudden death.

Cant Breathe, Cant Walk
According to John Bonagura, DVM, there are two alarming signs that a cat may be suffering from advanced cardiomyopathy. It cant breathe or it cant walk, says Dr. Bonagura, a professor of veterinary clinical sciences at Ohio State Universitys Veterinary Hospital. If the animal is struggling to take in air or if it cant move its rear legs, you should seek veterinary help right away.

Cardiomyopathy selects its victims indiscriminately. Although most frequently affecting male cats, it often claims the lives of females as well. While primarily occurring in older animals, the disease can also strike young cats – even younger than six months of age, according to Dr. Bonagura. And though genetic predisposition for cardiomyopathy puts some breeds at greater risk than others for cardiomyopathy – Persians, Ragdolls and Maine Coons, for example – no breed is immune to its threat.

Other conditions can be included in a list of cardiomyopathies, he notes, but in discussing this disorder, its generally sufficient to focus on these three types.

Hypertrophic Cardiomyopathy
Developing with no feasible explanation other than the strong likelihood of hereditary influence, hypertrophic cardiomyopathy – which occurs most often in male cats – is characterized by a thickening of the muscle tissue associated with the ventricles. This thickening results in poor heart function and obstruction of blood flow from the heart. It also causes the upper heart chambers to become enlarged. An echocardiogram will reveal not only thickening of the ventricular chamber, but will often show a dilated left atrial chamber, says Dr. Bonagura.

The consequence of these combined factors is diastolic dysfunction, a condition in which the heart fails to relax fully and fill with circulating blood. A resulting backup of fluid pressure in the lungs leads to shortness of breath, and blood clots may develop in the heart. If a clot breaks up, small pieces of it (emboli) may circulate and eventually lodge in an artery leading to the legs. This may cause the sudden onset of lameness or paralysis, often accompanied by severe pain.

Restrictive Cardiomyopathy
This disease category is poorly defined, says Dr. Bonagura. Restrictive cardiomyopathy is caused by the excessive buildup of scar tissue (fibrosis) on the inner lining and muscle of the ventricle. This prevents the organ from relaxing completely, filling adequately and emptying with each heartbeat. Most often affecting older cats, this disorder is also characterized by severely enlarged atria and reduced cardiac filling and pumping efficiency. The signs are similar to those of hypertrophic cardiomyopathy.

Dilated Cardiomyopathy
Far less common, primary dilated cardiomyopathy is characterized by a poorly contracting dilated left ventricle. The heart walls are thin and flaccid, which results in a forward flow of blood from the heart, causing heart failure. At the same time, the atria also are enlarged. Together, these malfunctions may eventually yield the signs of congestive heart failure – fluid in the chest cavity (pleural effusion) and in the lungs (pulmonary edema).

The cause of primary dilated cardiomyopathy is unknown. However, the condition is similar to a secondary disease that used to be common in cats and was found to be reversible through dietary change. We have known for the past 25 years or so, says Dr. Bonagura, that cats can acquire dilated cardiomyopathy from taurine deficiency.

Taurine, he explains, is an amino acid found naturally in the muscles and lungs of animals, and research has shown that dilated cardiomyopathy can be reversed by supplementing the feline diet with this acid. Today, cat food manufacturers add taurine to their products. As a result, Dr. Bonagura points out,  We rarely, if ever, see dilated cardiomyopathy due to taurine deficiency. If we do, its usually because owners are feeding their cats a very off-brand type of catfood, a homemade diet or dog food. Unfortunately, the primary form of dilated cardiomyopathy is not reversible with taurine supplementation.

Diagnostic Measures
The initial objective in diagnosing cardiomyopathy is to exclude other heart conditions that could have similar signs. Says Dr. Bonagura: Well listen to the animals heartbeat and take its blood pressure to make sure its not hypertensive. Well run a blood test to rule out anemia. And well check for hyperthyroidism, which can also cause an enlarged heart. If we find a thyroid problem, we treat it and, with that, weve usually taken care of the heart disease.

In most cases, X-rays will be taken. Sometimes an electrocardiogram will be done. The definitive diagnosis, however, is achieved by an echocardiogram, an ultrasound image of the heart which will clearly reveal any gross abnormalities. Depending on the level to which the examiner takes the echocardiogram, says Dr. Bonagura, the cost can range between $200 and $400.

Ironically, most cats that are treated for cardiomyopathy have no apparent signs of the condition whatsoever. Thats because a cats enlarged heart is most often detected during the course of a routine medical exam long before the emergence of obvious clinical signs. That is one of many reasons why routine exams are so important.

The Standard Therapy
Treatment for cardioymopathy is likely to rely on medications such as beta-blockers, which slow the patients heart rate, decrease its need for oxygen, and reduce demands on its ventricles. Other drugs may be used to help the heart muscle to relax. But cats with advanced cardiomyopathy, notes Dr. Bonagura, usually have blood clots or are in congestive heart failure by the time we see them. They have to be treated first of all for those conditions rather than for cardiomyopathy.

What does the future hold for those animals that have enlarged hearts but have not developed blood clots or progressed to congestive heart failure? Many cats – whether or not theyre on medication – can live for many years with stable disease, Dr. Bonagura says. But in other cats, the disease will progress and inevitably lead to life-threatening complications.