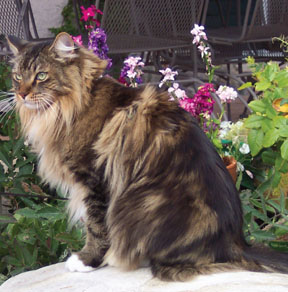 In case you havent noticed, there are a lot of differences between you and your cat. Take coughing, for example.

There are all sorts of reasons why you might voluntarily or nervously cause your thoracic cavity – the muscle-bound region between your neck and upper abdomen – to contract and force air from your lungs at a speed exceeding several hundred miles per hour. You might do it purposely to announce your late arrival at a cocktail party (ahem! ahem!). You might do it nervously just before entering the bosss office for a meeting. Or you might force a cough to clear your throat as you mount the rostrum to give a speech to your garden club.

Other than that, feline coughing is pretty much like human coughing – a noisy, reflexive act meant to clear the respiratory tract of irritants. If you or your cat experiences an occasional bout of coughing, theres little to worry about. But if either of you has a persistent cough, youd do well to seek medical attention.

A wide variety of irritants, from minor and transient to severe and indicative of a major health problem, can affect any portion of the feline respiratory system, whose purpose is to warm and humidify inhaled air, deliver oxygen to the lungs, and expel carbon dioxide and other waste gases.

A complex pathway of tracts and organs, the upper respiratory system consists of the nose (the perforated little button at the center of your cats face); two nasal passages (one on each side of its nose); the nasal cavity (a hollow structure surrounded by air-filled spaces that are situated just above and below the eyes); and the pharynx (a cavity behind the mouth) that opens, via a passageway called the larynx, to a tubular structure, the trachea, a flexible tube commonly referred to as the windpipe.

Inhaled air moves downward through the trachea, which is lined with minute hair-like structures (cilia), and then into two smaller tubes (bronchi) that lead to the lungs. Cats are designed to expel foreign bodies that irritate the upper reaches of the respiratory tract – the nasal passages – by sneezing. Foreign bodies that get farther down the tract are caught by the cilia lining the trachea, entrapped in mucus, and then expelled by coughing.

According to Richard Goldstein, DVM, an associate professor of small-animal medicine at Cornell Universitys College of Veterinary Medicine, frequent coughing is rare in cats. And when they do cough, they normally do so only briefly.

“Their coughing fits will usually last just a few minutes and go away,” he says. “In some cases, an acute irritant, such as dust in the environment, will persist, but even then it should resolve within less than a day or two. Any coughing that lasts longer than that is abnormal, and the cat should be examined by a veterinarian.”

Theres almost always a potentially serious underlying cause for a cough that lasts longer than a few days, so you want to discover that cause and treat it. Cough suppressants are not going to solve the problem.” Cough suppressants may also be toxic to your cat. Always check with your veterinarian before giving your cat a drug intended for humans.

Dozens of conditions can conceivably affect the feline trachea, bronchi and lungs and be responsible for coughing, Dr. Goldstein notes. He and his colleagues at the Cornell University Hospital for Animals see cats every day that are coughing. Among the most common underlying causes are asthma, pneumonia, bronchitis and environmental irritants.

Dr. Goldstein describes feline asthma as a “mechanical constriction” of the bronchi and smaller airways to the lungs that occurs when a cats immune system overreacts to the presence of an allergen by releasing stimulants that cause a constriction of the muscles in the walls of those airways. Asthma is characterized by frequent bouts of audible wheezing and, in some cases, tortured coughing – as if the affected animal is trying to disgorge a hairball. If the condition is not treated, the coughing may eventually cease, but this by no means indicates that the underlying cause of the coughing has disappeared. On the contrary, the bronchial constriction may have progressed to a point where the stricken cat is unable to bring air into and out of its lungs. Its normally pink ears, lips, and nose may turn blue from lack of oxygen, and at that point emergency veterinary treatment may be needed to save the cats life.

Bronchitis is similar to asthma in that it, too, affects the airways leading directly into the lungs. This condition, however, is marked by inflammation and swelling – rather than constriction – of the tissues lining the bronchi. It can be caused by bacterial or viral infection, by an overreaction of the immune system, or by the inhalation of irritating substances in the environment, such as household cleaners or cigarette smoke. In general, bronchitis is not an acute, life-threatening condition, as asthma can sometimes be. If the infection responsible for bronchitis is untreated, however, or if exposure to the environmental irritant is unrelieved, the condition can become chronic and may eventually predispose an animal to recurrent pneumonia, which is indeed a potentially lethal disorder.

Pneumonia, an infection of one or both lungs, can occur as secondary to bronchitis and other cough-producing illnesses, or it can be caused by a variety of bacterial, viral or fungal organisms. Prompt treatment with antimicrobial medication is usually required to remedy this severe lung ailment.

Tobacco smoke and vapors from household cleaning agents, Dr. Goldstein points out, are but two of the countless environmental irritants that can cause a cat to experience sporadic or chronic coughing. Others include dusty kitty litter; aerosol sprays; pollen from trees, weeds and grass; mold and mildew; dust mites; smoke from fireplaces and candles; and even some cat foods (although food allergies more frequently manifest themselves in dermatologic or gastrointestinal problems).

To minimize the chances that your cat will develop a serious cough, Dr. Goldstein advises owners as follows: “Dont smoke, avoid using carpet cleaners that may irritate the animals respiratory system, keep the house well humidified and try using dust-free litter. For cats that are allowed outdoors, be aware that pollen and other substances in the air and on the ground can be inhaled and cause coughing.”

“Keep in mind,” he adds, “that any cat can have a brief coughing attack for any number of reasons. Theres nothing much you can do about it, so just leave the animal alone and let it pass. If the coughing persists for more than a day or so, see your veterinarian right away. Do not give the animal any human medications, such as pain relievers, anti-inflammatory drugs or cough suppressants.”