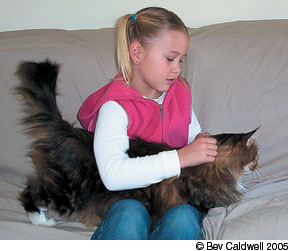 Cats occasionally scratch people. Less commonly, the scratch develops into a bacterial infection called cat-scratch disease (CSD). Although the National Center for Infectious Diseases of the Centers for Disease Control estimates that 25 to 41 percent of the general cat population carries the bacteria, fewer than four in 100,000 people in the United States acquire cat-scratch disease.

Cat-scratch disease is caused primarily by the bacterium Bartonella henselae, although other bacteria have also been implicated. Cat-scratch disease is really a misnomer, because it may be possible to acquire the infection when no animals are present or with no history of exposure to cats at all.  Most cases in people result from cat bites or scratches, but other modes of transmission – like flea or tick bites – are likely possibilities. Bartonellosis is a more correct name for the disease, says Susan Little, DVM, president of the Winn Feline Foundation.

Up to 40 percent of cats carry Bartonella henselae in their bloodstreams at some time or other, but the majority show no signs of illness. Exactly how the infection is transmitted to cats is unclear, but fleas may be the primary culprits. The key factor with cats is the presence of fleas, says Dr. Little. Whether they are strays or housepets, cats probably get infected from fleas.

Although one might think that animal care workers such as veterinarians, shelter staff and rescuers would be more likely to become infected, the majority of victims are children under the age of 17. Also susceptible are people with compromised immune systems from AIDS, cancer, heart valve disease or organ transplants. It could be due to a combination of factors, says Dr. Little.

People infected with cat-scratch disease bacteria may never know it. Its not as simple as coming into contact with the organism, says Dr. Little. The immune system usually gets rid of the infection before you notice it. In three to 10 days, those who develop the disease will notice a small bump or blister resembling an insect bite at the site of the scratch, or in some cases, a bite. A fever and swollen, sometimes painful, lymph nodes may follow. In most instances, cat-scratch disease is mild and self-limiting, which means it need not be treated. Even in children, the disease usually resolves itself in one or two months.

If you develop symptoms, contact your physician. Although there is no definitive test for CSD, your doctor will take a medical history, evaluate symptoms and inquire if youve had contact with a cat or other animal. The doctor will do an extensive workup and rule out other causes, says Dr. Little.

There is no vaccine for CSD, and, in most cases, no treatment is required. The disease will simply run its course. If the lymph nodes remain infected, the doctor may prescribe a course of antibiotics, depending on the patients medical history.

To prevent CSD, avoid rough-housing with your cat and do not tease or provoke him. This is especially important advice for children. Using a toy to play with your cat rather than using your hands will also prevent your cat from associating your hands as prey objects and continually pouncing on or attacking them. If you are scratched, wash the area immediately with soap and water. Dont allow your cat to lick any open wounds you may have. Practice good flea control management. Declawing your cat is unnecessary to prevent the disease. Concentrate on flea control, says Dr. Little.

Immunocompromised Cat Owners
If you have a compromised immune system, discuss with your doctor whether having a pet cat is advisable. There is no definitive way to tell if a cat is capable of spreading Bartonella infection, but since kittens more commonly carry Bartonella than do older cats, you might adopt an adult cat that is more sedate and less likely to scratch you during play. Older cats are less likely to scratch and carry the disease to people, says Dr. Little. Make sure the cat is free of fleas and, if possible, try to adopt a cat from a flea-controlled environment.

Talk to a veterinarian and determine what type of wellness testing the cat should undergo. Have the cat examined for fleas and tested for other diseases, parasites and skin infections like ringworm. And practice good flea control, says Dr. Little.

Further Information
For more information on cat scratch disease, visit the website of the Winn Feline Foundation at http://www.winnfelinehealth.org/ or the Centers for Disease Control at www.cdc.gov/healthypets. For information on other diseases that people can catch from cats, see Zoonotic Disease: What Can I Catch from My Cat? on the Cornell Feline Health Center website at www.vet.cornell.edu/fhc/resources/brochure/ZoonoticDisease.html