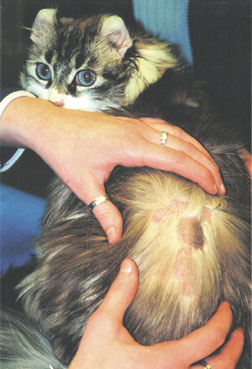 Though not so clearly demarcated as, say, a kidney, liver, spleen or heart, a cats skin qualifies biologically as an organ. That is, the thin layer of tissue that encases the entirety of an animals body is a differentiated component of its physiologic makeup that performs specific life-sustaining functions.

Indeed, the skin is the largest organ of the feline body, its usefulness extending well beyond the obvious role it plays as the matrix for your cats lustrous haircoat. In a healthy animal, it functions as a barrier against invasion by harmful microorganisms. It works as a watertight seal, retaining an animals body fluids and preventing dehydration. Along with the haircoat, the skin insulates an animals internal organs against the outside worlds extremes of heat and cold. And it serves as a sensory surface, picking up information from the environment – such as the presence of nearby objects or potential prey – and relaying that information to the brain.

A Multilayered Structure
Your cats skin comprises three layers of tissue: (1) the epidermis, an outer layer that prevents the loss of vitally important water and salts from the body and protects the animal against assault from the environment – exposure to solar rays, for example, or bacterial infection; (2) the dermis, a support structure directly beneath the epidermis that is made up of blood vessels, nerve tissues and several specialized substances, embedded in which are the hair follicles and sweat glands; and (3) the subcutis, a layer of intertwined fibers that enclose the fatty tissue of the skin.

Despite its elegant, eminently serviceable and normally durable structure, the feline skin is subject to a wide array of disorders, most of which, in themselves, are readily treatable but – if ignored by a cats owner – can be life-threatening.

Most skin conditions will not kill a cat, says William Miller, Jr., VMD, a professor of dermatology at Cornell Universitys College of Veterinary Medicine. But in any case, if the condition is overlooked by its owners, youre going to have a very uncomfortable animal.

Potential Problems
The broad array of disorders that may assault a cats skin have a range of causes that can be generally classified in the following categories:

Parasitic – Severe reaction to the presence on the skin of such external organisms (ectoparasites) as fleas, lice and mites is by far the most frequently observed feline dermatologic disorder. (Among all of the causes of skin disease in cats, says Dr. Miller, this one wins hands-down.) These minute, speedily proliferating creatures are the source of relentless itching and irritability, with noticeable skin and haircoat damage a possible consequence of relentless scratching.

Fungal – These infections are caused by a wide variety of molds and yeasts that feed on epidermal keratin, a protein substance that is the main structural component of a cats hair. The occurrence of fungal skin infections is most common in areas with warm, muggy climates that support the growth of these microorganisms in soil.

Neoplastic – Feline skin is second only to the lymphatic system as the site of various types of cancer (neoplasms). Cancerous skin tumors are frequently malignant in cats, spreading eventually – and lethally – to such other vital organs as the lungs and the liver. Feline skin cancers are not uncommon, according to Dr. Miller.

Nutritional – Dry, scaly skin and a brittle, disheveled haircoat can result from a deficiency of certain important dietary components such as proteins and fatty acids. These skin conditions rarely occur in cats that routinely consume a complete and well-balanced diet.

Seborrheic – This type of skin disorder, which is uncommon among cats, stems from defects in an animals ability to produce keratin, resulting in inflammation and the development of scales and crusts on the skin. A related disorder – one that is quite frequently seen – is feline acne, the overproduction of keratin and its resulting buildup in an animals hair follicles, which prompts the emergence of blackheads on an affected cats chin and lips. The condition, though unsightly, is not generally considered to be a serious health problem.

Viral – Infection with various viral agents – for example, feline immunodeficiency virus (FIV) and feline leukemia virus (FeLV) – may be accompanied by skin disorders, but this is not a commonplace occurrence, says Dr. Miller.

Bacterial – The skin of a healthy cat is typically resistant to bacterial infection, although these microorganisms may penetrate into the epidermis of an animal at the site of a scrape, bite, scratch or other type of wound.  Except for pus-filled abscesses, which are apt to develop at the site of a bite wound, says Dr. Miller, bacteria-caused skin conditions are infrequently seen in cats.

Hormonal – Skin disorders may occur as the byproduct of underlying malfunctions of hormone-secreting glands, such as the thyroid gland and the pancreas. Such skin conditions are extremely rare in cats, says Dr. Miller. In fact, he notes, they are virtually nonexistent.

Immunologic – An abnormally intense immune-system response to food or to certain inhaled substances – such as pollen or household dust – may be the cause of skin lesions as well as watery eyes and sneezing, says Dr. Miller, and they are relatively common.

In addition to these categories, a variety of skin disorders may develop as the result of traumatic injury – chemical and thermal burns, bite wounds, frostbite, overgrooming and so forth. Some of these injuries may, of course, be life-threatening in themselves; they can also expose a cat to serious secondary infections.

Chief Offenders
Flea infestation is frequently responsible for skin disorders in the general feline population, says Dr. Miller, although the increasingly widespread use of flea-control products during recent years has significantly reduced its occurrence. Also ranking high on the list is the presence of certain fungi (dermatophytes) that can flourish in an animals haircoat, skin and claws. The result is a fungal disease called feline dermatophytosis – better known as ringworm. This disease is most common in subtropical areas of the world where warm climate conditions encourage the growth of the offending fungi. It can also be a major problem whenever many cats are housed closely together, such as in some breeding catteries and shelters. Other major causes of feline skin disease include certain types of parasitic mites – tiny, spiderlike creatures that can infest an animals ears, spread around the surface of its body and cause a serious skin disease commonly referred to as mange.

The cause of a felines skin disease can almost always be determined by a veterinarian or a veterinary dermatologist, says Dr. Miller. If owners dont put financial or other restrictions on the examination, he notes, well be able to identify the source. So the biggest issue is the time and effort that were allowed to put into the diagnosis. If were given enough leeway, we can trace the problem to its source.

With the exception of advanced skin cancers (which are almost always deadly) and allergies (which are manageable but never really curable), skin diseases generally respond well to treatment, he adds.

Risk Factors
Neoplastic skin disorders are most common in middle-aged and geriatric cats, says Dr. Miller. And kittens – because they are often housed together – are most susceptible to easily spread fungal diseases, such as ringworm, and those stemming from infestation by fleas and other external parasites. Beyond that, he says, age is not a risk factor.

Susceptibility is not associated with gender difference, he notes, except in skin diseases that may be associated with sex hormone anomalies. Although breed is not a risk factor in itself, he adds, longhaired cats may be at higher risk due to the matting of their coats, which can promote the development of fungal and parasitic infections.

Feline skin disease can largely be avoided, says Dr. Miller, through proper nutrition and vigilant attention by a cats owner. Make sure the animal is eating a healthy diet, he advises, and examine its skin regularly. Nothing elaborate is needed in that regard – you can do that now and then while just petting the animal.