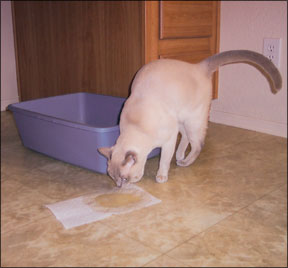 For most aesthetically sensitive people, watching a cat engaged in the process of relieving itself in its litter box certainly cannot be counted among lifes great pleasures. On the other hand, the sight may bring tears of joy to the eyes of some cat owners those whose animals have recovered from disorders that have interfered with normal elimination and are once again urinating and defecating routinely, painlessly, and in proper amounts.

Many feline conditions some of them life-threatening commonly manifest themselves in the excessive passage of watery feces (diarrhea); the painful retention of dry, hardened feces (constipation); the frequent voiding of abnormally large amounts of urine (polyuria); or difficult, perhaps even impossible, urination (dysuria).

In some cases, points out Richard Goldstein, DVM, the source of abnormal defecation, for example, may often be traced to a condition external to the gastrointestinal system proper, such as a hyperactive thyroid gland or a disease of the kidneys or liver. Less frequently, he notes, various neurologic conditions and nutritional imbalances can also play a role in the emergence of elimination malfunction.

Other abnormalities in defecation will be directly associated with the GI tract and will be most often attributable to inflammatory, infectious or cancerous disorders, says Dr. Goldstein, an associate professor of small-animal medicine at Cornell Universitys College of Veterinary Medicine. Identifying the specific cause, he adds, will depend largely on the presenting cats age and the intensity of the clinical signs.

Why Diarrhea Can Occur

A wide range of conditions can cause fecal matter to move through a cats intestinal tract too rapidly. This results in the insufficient absorption of nutrients, water and chemicals called electrolytes substances such as potassium that regulate the flow of water molecules and electrical charges across cell membranes. When this occurs, the animals bowel movements may be frequent and perhaps uncontrollable, and its stools (evacuated fecal matter) will be soft, watery and possibly streaked with mucus or blood.

The condition may be of brief duration, readily treatable and ultimately harmless. An abrupt change in diet, for example, may cause a cat to experience diarrhea for a few days, says Dr. Goldstein. Likewise, a stressful situation a long automobile trip or a weekend stay at a veterinary clinic may produce a brief episode of loose bowels.

But extended or recurrent bouts of diarrhea may indicate that an animal is harboring a serious disease. Examples of these conditions, he notes, are inflammatory bowel disease, a disorder affecting the lining of a cats intestines that is generally attributed to an immune system abnormality; feline distemper (panleukopenia), a viral infection; and intestinal lymphoma, a form of cancer.

“Theres usually nothing to worry about if a cat has diarrhea for only a day or two,” says Dr. Goldstein, “especially if it is eating, drinking and behaving normally. But if the diarrhea persists and the cat is also showing systemic signs, such as poor appetite, lethargy or vomiting, you could have a medical emergency on your hands. Youd be wise to seek veterinary care as soon as possible.”

Like diarrhea, constipation has many possible causes. Probably the most common among these, according to Dr. Goldstein, is dehydration a lack of the water needed within the intestinal tract for the formation of a normal stool. “Also, if a cat is reluctant to use the litter box because the box is unclean or because of competition from other cats in the household,” he notes, “this could predispose the animal to constipation.” Frequently seen as well is a disorder called megacolon, in which the colon lacks motility, the ability to contract and relax appropriately. In addition to dehydration and megacolon, he says, cats can have blockages in their intestines caused by the growth of tumors within the tract.

An impacted bowel is sure to be painful and could be lethal if unrelieved. A cat whose colon is severely obstructed with feces may have to be hospitalized and given enemas to relieve the blockage. In extreme cases, an animal may have to be anesthetized so that the hardened feces can be removed by hand. “But most constipated cats,” says Dr. Goldstein, “can be treated with a fiber-rich diet and an agent that increases the motility of the colon. In any case, though, you should let your veterinarian know if you see that your cat is not having regular bowel movements or seems to be straining in the litter box.”

Several disorders involving either the upper urinary system (kidneys and ureters) or the lower system (bladder and urethra) may lead to abnormalities in urination. Some of these disorders often result in uncontrolled urination or the passage of excessive amounts of urine. Various endocrine system disorders, such as diabetes and hyperthyroidism, as well as liver and kidney disease, can be responsible for the excessive production and elimination of urine, says Dr. Goldstein.

Overall, he notes, endocrine disorders and kidney disease are the most frequently observed sources of polyuria. These conditions, as well as bacterial infections of the urinary tract, are “very, very common” causes, says Dr. Goldstein.

“With polyuria,” he points out, “youre going to notice a lot more urine in the litter box. It wont clump up; it will form pools. Youll also notice that your cat is going to its water bowl more frequently and drinking a lot more. You should consult your veterinarian right away, especially if you see that the cat appears to be in pain while its urinating. If kidney disease, diabetes or hyperthyroidism is causing the excessive urination, youd like to have it treated as soon as possible. Its not a middle-of-the-night kind of emergency, but I wouldnt wait too long before seeing a veterinarian.”

A cats inability to pass normal amounts of urine is known as dysuria, while painful urination is called stranguria. Both of these problems are common in cats, and Dr. Goldstein advises that they may indicate the presence of a potentially life-threatening disorder. A cat may express its discomfort while urinating by crying out while in its litter box or by excessive licking of its genital area.

“The most common cause of difficult urination,” he says, “is idiopathic cystitis, which is an inflammatory lesion in the bladder that is most frequently seen in young cats. The second most common cause is the formation of plugs made of mucus or stones made of mineral that block the flow of urine out of the body. These obstructions are more often seen in male cats.”

These two conditions, as well as cancer of the lower urinary tract, can cause difficult urination. And owners should be aware that anything preventing the flow of urine from an animals body is an emergency situation that must be treated immediately. If the blockage is not removed within hours, a cat that is unable to urinate will become very ill and perhaps die.

Dr. Goldstein urges owners to avoid trying to relieve any of these disorders without the assistance of a veterinarian. “In many cases,” he says, “putting a cat on a bland diet may help some conditions that cause diarrhea, but I wouldnt make any drastic diet change without talking to a veterinarian.”

He points out that there are many medications and other therapies available that may be effective in relieving feline constipation, diarrhea or difficult urination. “Its most important, though, for a veterinarian to examine an affected animal as soon as the clinical signs are noticed,” he advises. “Above all, dont just go ahead and try to solve the problem by giving your cat a medication intended for humans.” v