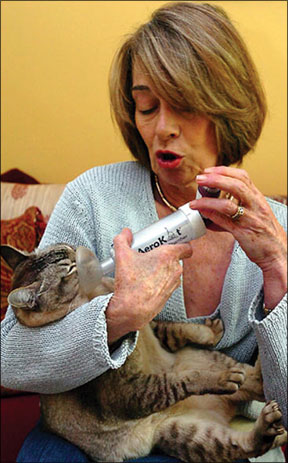 More than 80 million cats currently live in American homes, and veterinary epidemiologists estimate that 800,000 or more of these animals – one percent or so of the nations domestic feline population – suffer from acute or chronic asthma. Although this condition – the most commonly diagnosed respiratory disorder in cats – is incurable, veterinary researchers are making progress in understanding its causes and devising methods for its effective treatment.

Richard Goldstein, DVM, associate professor of small animal medicine at Cornell Universitys College of Veterinary Medicine, describes asthma as a constriction of the airways, or bronchi, the two narrow tubes that lead directly from the trachea to the lungs. The narrowing of the airways occurs when a cats immune system overreacts to the presence of an allergen and responds by releasing stimulants that cause inflammation and swelling of the sensitive tissue lining the bronchi and contraction of the surrounding muscle. This results in the narrowing of the airway and causes breathing difficulty (dyspnea), especially when exhaling.

Young and old cats seem to be similarly predisposed to asthma. Likewise, males and females appear equally at risk. Genetics may possibly play a role, says Dr. Goldstein, and veterinary scientists are striving to identify the heritable factors that may make one cat – or one breed – more vulnerable to asthma than another. At present, however, the role of genetics remains unclear. “Some people think, for example, that the condition may be more common in Siamese cats,” he notes, “but this has not been shown in large studies.” Meanwhile, says Dr. Goldstein, it is only safe to say that cats that typically spend some or all of their time outdoors are more likely than exclusively indoor cats to be asthmatic simply because they are routinely exposed to many more potential allergens.

He describes the typical onset of an asthma attack as follows: “The cat is at rest, not doing anything at all, or else its playing and suddenly stops. Its breathing becomes more rapid, and the cat starts trying to take in air with its mouth open. Its chest and abdomen move up and down abnormally, the breathing is shallow and rapid. And if you listen closely you may be able to detect a wheezing sound as the cat exhales.”

Dr. Goldstein classifies the severity of asthma attacks in the following four categories: (1) mild (the symptoms occur intermittently – but not daily – and they do not interfere with the cats lifestyle); (2) moderate (the symptoms do not occur daily, but when they do, they are more severe and debilitating, and they interfere with the cats activities); (3) severe (significantly debilitating symptoms occur daily); and (4) life-threatening (bronchial constriction results in potentially lethal dyspnea and consequent oxygen deprivation, which causes normally pink tissues, such as the lips and nose, to turn blue).

“At this point,” Dr. Goldstein advises, “you have an emergency situation, and veterinary care is mandatory.” In fact, he points out, veterinary counsel should be sought at the earliest stage. “If the initial signs of dyspnea are ignored,” he points out, “the condition can rapidly progress to the more severe stage. Then the cat may die unless emergency treatment is immediately obtained.”

Precisely pinpointing asthma as the cause of a cats chronic respiratory discomfort is challenging, says Dr. Goldstein, since many other conditions may be responsible for such symptoms as recurrent wheezing, coughing and dyspnea. For this reason, the standard diagnostic approach, he says, is “exclusionary” – it attempts to rule out these other conditions.

Accordingly, the first diagnostic step is a thorough physical exam, during which the veterinarian will initially use a stethoscope to locate the specific source of the wheezing while also attempting to rule out any heart or lung problems that may be causing the respiratory difficulties. Next, says Dr. Goldstein, the cats blood may be tested to see, among other things, whether there is a suspiciously high concentration of white cells called eosinophils, which are associated with an allergic response.

The third diagnostic step is likely to involve X-rays. “A cat may seem perfectly normal,” says Dr. Goldstein, “but X-rays can show overinflation of the lungs that results from the animals inability to completely exhale. This condition is known as air trapping.”

Finally, the veterinarian may order a fecal exam to rule out the presence of lungworm, a parasite that can live in the feline bronchi and cause asthmatic symptoms. (Early stages of this parasite can be found in an affected animals feces.) Based on these procedures, says Dr. Goldstein, the veterinarian may be able to make a presumptive diagnosis of asthma.

Like human asthma, chronic feline asthma is incurable but generally manageable. Treatment, according to Dr. Goldstein, depends on the severity of the condition. Most commonly, it involves the use of a corticosteroid drug to reduce bronchial inflammation in combination with a bronchodilator to open up the airways. In most cases, these drugs can be used at home, they are effective both therapeutically and preventively, and they may be administered in a variety of ways – orally in tablet form, through injection, or, ideally, via an inhaler.

Over the years, corticosteroids and bronchodilators have emerged as the most effective agents in the treatment of feline asthma. A number of drawbacks, however, have been identified with these drugs when administered in the traditional manner, that is, either in tablet form or by injection. Frequent and extended corticosteroid therapy in cats, for example, is associated with an elevated risk for pancreatitis, diabetes and other conditions. And both corticosteroids and bronchodilators pills and injections are inefficient, since they circulate systemically rather than targeting the specific respiratory system tissues involved in asthma.

In recent years, Dr. Goldstein and other veterinary experts have come to favor administering corticosteroid drugs such as fluticasone proprionate (Flovent) and bronchodilators such as albuterol (Proventil, Ventolin) as inhalants, either daily or as needed. The drugs are contained in little chambers called “spacers,” explains Dr. Goldstein, which fit into a mask that is placed over an asthmatic cats face for 10 seconds or so. “Thats long enough,” he says, “for the cat to take a few breaths and inhale a puff or two of the drug. The advantage of the inhaler is that a higher level of the drug gets to the lungs.”