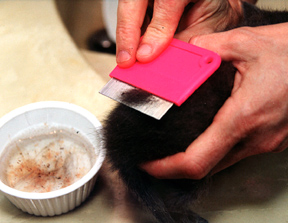 Your typical cat flea (Ctenocephalides felis felis) doesnt ask a lot from life. All it wants are the basics – a comfortable place to live, proper nourishment, the chance to raise a family and the company of like-minded friends.

The warm, moist, furry hide of your cat can provide all of these amenities – and thats why fleas, if given the opportunity, will eagerly hop on the animals back and take up residence. While living in such comfortable surroundings may be just fine for the guest, the situation can cause no end of trouble for the host.

A Dangerous Parasite Thats Built for Action
Fleas are the most common of all external feline parasites, and the consequences of infestation will be terribly uncomfortable for most cats and can be the source of deadly disease for some. Flea bites cause horrible itching, and a hypersensitive cats incessant scratching may open wounds in the skin that are vulnerable to serious infection. Indeed, these tiny, wingless creatures often carry infectious agents themselves – such as dog and cat tapeworm and the bacteria that causes cat-scratch disease in people.

Flea infestation can pose a special danger to kittens, says William Miller Jr., VMD, a professor of dermatology at Cornell Universitys College of Veterinary Medicine. A flea doesnt actually bite, he points out. It sticks its proboscis into the skin and sucks blood. It doesnt take too much of this sucking to cause anemia in a kitten that is carrying innumerable fleas. You dont see this problem very often in adult cats, but its frequently seen in kittens.

Entomologists have identified more than 2,200 types of fleas. As Dr. Miller notes, There are cat fleas, dog fleas, human fleas and rat fleas, and they all look pretty much alike and generally have the same lifestyles. But it is C. felis felis that is most problematic. Thats the species were almost always talking about when discussing fleas and the trouble they cause.

The adult flea is a tiny, brownish, wingless creature, ranging in size from that of a pinhead to about one-eighth of an inch long. It has a slender, flattened body; short antennae; a strong, saw-toothed jaw; a slender, tubular, sucking snout; and powerful legs that facilitate its main mode of locomotion – jumping. A flea can leap as far as seven feet – certainly far enough to hitch a ride on a passing animal.

The cat fleas mouth is made up of three sections: two petal shaped parts (laciniae) that close down around a central mouthpiece – the epipharynx. When put into place, the laciniae pierce through the hosts skin, while the epipharynx pierces a blood vessel and sucks the hosts blood.

Eggs Galore
A fleas life cycle lasts about a month, though it can go on for longer than that, depending on temperature and humidity. (It prefers a warm and moist climate.) During the cycle, the insect moves through a complete metamorphosis – from egg to larvae to pupa to adult – and is most dangerous in the larval and adult stages. In the larval stage, fleas need blood to support their growth, and in the adult stage, females need it to complete their reproductive cycle.

After feeding on an animals blood, adult females reproduce speedily and efficiently, typically laying hundreds – or even thousands – of eggs at the rate of about one per hour over the course of several weeks or months. A female will usually have a blood meal, lay a few eggs, have another blood meal, lay some more eggs, and so on.

The eggs soon hatch into larvae, and the blood-nourished larvae spin cocoons, within which – as pupae – they mature. When the environment is appropriately warm and moist, the cocoons burst open to yield more adults to perpetuate the cycle.

Under ideal conditions, says Dr. Miller, one mating female will lay at least 20 eggs a day, half of which hatch to females. This can eventually produce about 20,000 new adult fleas in 60 days.

All cats are subject to flea infestation and its consequences. There are no predilections in terms of age, breed, or gender. Many cats are able to harbor thousands of fleas without showing significant signs (except for persistent scratching). Others, though, may be profoundly affected.

According to Dr. Miller, cats tend to be bitten mostly on the back of the neck and the top of the tail head. Cats are grooming animals, he points out, and the fleas quickly figure out that a cat cant get at those areas. So the cat starts scratching, and because cats have very sharp claws, they can get very severe skin lesions very quickly.

Meanwhile, cats with flea allergy dermatitis are apt to show distressful signs – reddish, crusty bumps, for example – even in areas that have not been savagely scratched as well as those that are obviously itching. The lower back, thighs, abdomen, head and neck are among the areas most commonly affected.

Obsessive scratching is the clearest indication that a cat is infested with fleas – especially if the weather is warm and muggy. On close inspection, the insects can be seen with the naked eye, usually on the animals belly, back or near the tail.

Fleas may also by detected by having the animal stand on a large piece of white paper or a pillowcase and running a fine-toothed comb through its coat. The fleas, along with small black specks (their feces), will be caught in the teeth of the comb or, if any feces has fallen from the comb, be visible on the white background.

Suspected infestation can be readily confirmed by means of veterinary diagnosis involving the animals medical history, a physical examination, and possible skin testing.

Treatments That Work
There are only two ways to counter flea infestation: You must rid your cat of the insects, and you must also get them out of the environment where your cat spends time – your home and outdoor property if your cat or his animal roommate is allowed to wander outside. Ridding the environment of fleas requires meticulous vacuuming, the use of flea-killing products, and perhaps even the services of a professional exterminator.

To treat the animal, says Dr. Miller, products have been developed in the last six or seven years that are very effective. Some of them contain flea preventives that circulate in the blood. Others are designed to sort of wrap the animal in an insecticide. You have to be very careful to read the label, however, since some of these substances are fine for dogs, but they can be toxic to cats. In fact, if you put it on a dog and let a cat lick the medication off while its wet, it can kill the cat.

According to Dr. Miller, if you use one of these products faithfully – beginning in the spring of the year and going into the fall before colder weather sets in, your animal is very likely to remain free of fleas. Since these products have become available, he notes, the frequency of flea dermatitis has decreased tremendously. We see very few cases now.

At the same time, he points out, owners who treat their animals with one of these products while neglecting to prevent recurring infestation in the environment will never resolve the flea problem. Skunks, raccoons and other wildlife will seed your backyard with fleas, he says. Your animal brings one or two of them inside, and suddenly youll have hundreds of thousands of fleas.

At that point, just putting one of these applications on your animal isnt enough. Youve waited too long, and the amount of effort and expense involved in getting the condition under control is apt to be humongous.