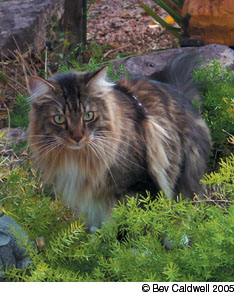 Well over 60 million cats now live in American homes, according to data collected by the United States Census Bureau, and hundreds of thousands of these animals suffer from asthma, the most common of all feline respiratory ailments.

This disease – responsible for chronic and acute attacks of labored breathing, chest constriction, wheezing and coughing – is incurable, but it is not untreatable. And fortunately, groundbreaking advances in research surrounding the causes of asthma and the methods used to deliver the medications necessary for its treatment are making significant – even revolutionary – progress.

An Allergic Response
Richard Goldstein, DVM, an assistant professor of small animal medicine at Cornell Universitys College of Veterinary Medicine, describes asthma as a mechanical constriction of the airways, or bronchi, the tubes that lead directly from the trachea to the lungs. The narrowing of the airways occurs when a cats immune system overreacts to the presence of an allergy-producing substance (allergen) and responds by releasing stimulants that cause inflammation and swelling of the mucous membrane lining the bronchi.

Among the most common asthma-causing allergens are dusty kitty litter; vapors from household cleaning solutions and aerosol sprays; tobacco smoke; pollen from trees, weeds and grass; mold and mildew; dust mites; smoke from fireplaces and candles and even some foods, although food allergies most frequently manifest themselves in skin or gastrointestinal problems.

A Puzzling Affliction
In many respects, feline asthma is a mysterious disease. Young and old cats seem to be similarly predisposed to it. Likewise, males and females appear equally at risk. Genetics may possibly play a role, says Dr. Goldstein, and veterinary scientists throughout the U.S. are striving to identify the heritable factors that may make one cat – or one breed – more vulnerable to asthma than another. But at present the role of genetics remains unclear.

Some people think that the condition may be more common in Siamese cats, he notes, but this has not been shown in large studies.  Meanwhile, says Dr. Goldstein, it is only safe to say that outdoor cats are more likely than indoor cats to be asthmatic, simply because they are routinely exposed to many more potential allergens.

Signs of Distress
Frequent bouts of audible wheezing and recurrent retching – as if the cat is attempting to cough up a hairball – are among the clear signs of bronchial distress stemming from chronic asthma. The earliest sign of an acute and perhaps life-threatening attack, however, is labored breathing (dyspnea), which may or may not be accompanied by wheezing or coughing.

Says Dr. Goldstein: The cat is at rest, not doing anything at all. Or else shes playing and suddenly stops. She begins breathing rapidly, and soon begins trying to take in air with her mouth open. Her chest and abdomen move up and down abnormally, the breathing is shallow and rapid. And if you listen closely you may be able to detect a wheezing sound on expiration – as she exhales air from her lungs. If you notice this, you should get veterinary help right away.

If the dyspnea progresses, the cats normally pink ears, lips, nose and gums may turn blue from lack of oxygen, in which case emergency veterinary care is mandatory. The attentive cat owner may be able to avoid the peril of an acute attack by recognizing the signs of chronic asthma and seeking veterinary counsel before the disorder gets out of hand.

Diagnosing Asthma
Precisely pinpointing asthma as the cause of a cats chronic respiratory discomfort is a daunting challenge, says Dr. Goldstein, since many other conditions can be responsible for the common signs: recurrent wheezing, coughing and dyspnea. For this reason, the standard diagnostic approach, he says, is exclusionary – it attempts to rule out these other conditions. Accordingly, the first diagnostic step is a thorough physical exam, during which the veterinarian will attempt to locate the source of any wheezing. This is possible with the use of a stethoscope, which can detect subtle sounds emanating from deep within a cats body that are not otherwise audible. In the exam, the veterinarian will also attempt to rule out heart and lung problems that may cause asthma-like respiratory difficulty.

Next, says Dr. Goldstein, the cats blood will be tested to see, among other things,  whether there is a suspicious over-representation of white cells called eosinophils, which are associated with the allergic response. But usually, he observes, the bloodwork is pretty normal.

The third step on the diagnostic path is likely to involve X-rays. A cat may seem perfectly normal, says Dr. Goldstein, but X-rays can show overinflation of the lungs that results from their effort to open up the narrowed bronchi to allow the passage of expired air.

Finally, the veterinarian may order a fecal exam to rule out the presence of lungworm, a parasite that can live in the feline bronchi and cause asthmatic symptoms. The presence of this parasite, in its early stages, can be detected in an affected animals feces. Based on these measures, says Dr. Goldstein, the veterinarian may be able to make a presumptive diagnosis of asthma.

A number of drawbacks, however, have been identified with these drugs when administered in the traditional manner, that is, either in tablet form or by injection.

Frequent and extended corticosteroid therapy in cats, for example, is associated with an elevated risk for diabetes and other conditions. And for both corticosteroids and bronchodilators, pills and injections are inefficient, since they circulate systemically rather than targeting the specific respiratory system tissues involved in asthma.

New Developments
In recent years, Dr. Goldstein points out, the field of veterinary research has centered on two major issues: the causes of asthma and the improvement of the efficiency with which therapeutic drugs are delivered to affected cats.

Progress in the first area seems promising, says Dr. Goldstein, as researchers are shifting their attention from devising new asthma remedies to gaining a better understanding of how to prevent the disease from occurring in the first place. And progress in the second area, he says, has already yielded revolutionary results with the development of whats termed inhalant therapy.

For the past few years, Dr. Goldstein and other veterinary experts have come to favor administering corticosteroid drugs such as fluticasone proprionate (FloventTM)  and bronchodilators such as albuterol (ProventilTM, VentolinTM) as inhalants, either daily or as needed.

Prompt Relief
An appropriate drug is dispensed via an inhaler with a small tube-shaped chamber called  a spacer, explains Dr. Goldstein. The spacer fits into a mask that is placed over an asthmatic cats face for five or 10 seconds while the owner releases a few puffs of the inhalant substance by pressing on an aerosol container connected to the other end of the spacer. Thats long enough, he says, for the cat to inhale a few breaths of the drug. The advantage of the inhaler is that a higher level of the drug goes directly to the lungs and, in doing so, reduces the systemic side effects that you can get with oral and injected medications.

The first inhaler that was developed specifically for cats and that continues to be the most widely used is a product called AeroKatTM, which employs the same drug-delivery method as the metered-dose inhalers developed for humans in the 1960s. (See sidebar.) Use of an inhaler, Dr. Goldstein points out, is appropriate both for treating occasional asthma attacks and for maintenance therapy over extended periods.

Inhalant therapy may even be suitable alone or in conjunction with other medications for treatment in emergency situations.

Inhalant therapy, in his view, is the most significant advance in the treatment of feline asthma that has occurred in decades. According to Dr. Goldstein, the technique and the device that enables it have been embraced by virtually all veterinarians at large universities and hospitals, and he trust that inhalant therapy will soon be adopted by all smaller, local clinics in the U.S. and accepted by owners of asthmatic cats nationwide.