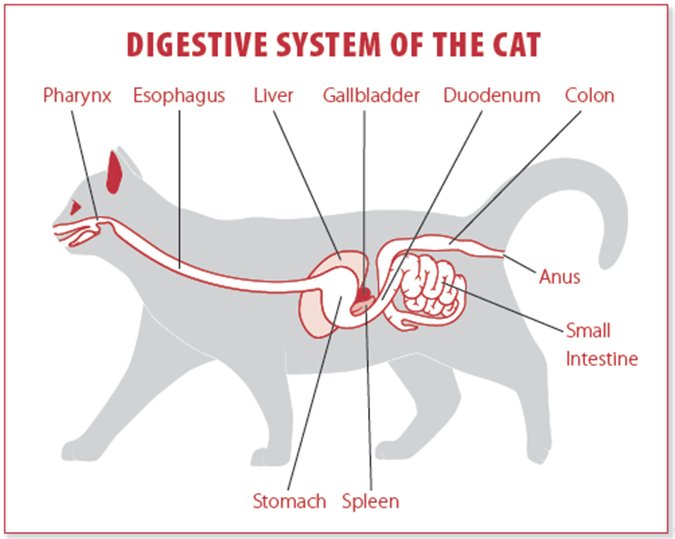 Cats don’t develop gallstones the way we do. Ours are made from cholesterol. Cats’ stones usually consist of calcium and a bile pigment called bilirubin. However, just as in people, cats can have gallstones without any symptoms or ill effects. Unless a cat has an X-ray or ultrasound for some reason, his owner might never know he had the disorder.

All the more important for owners to know that, although gallstones are believed to be rare in cats, “If an obstruction occurs, it can be severe and life threatening, requiring emergency surgery,” says Meredith Miller, DVM, ACVIM, a lecturer in Small Animal Internal Medicine at Cornell University College of Veterinary Medicine.

Signs of an obstruction can include jaundice, with the eyes, skin and gums turning yellow. Cats will often become quite sick — weak, refusing food and vomiting severely. An obstruction that ruptures the bile duct or gallbladder, sending bile directly into the abdomen, can be fatal, even with aggressive surgery.

“The true incidence of gallstones, called choleliths, isn’t known because they are often silent and don’t cause any clinical signs,” Dr. Miller says. “It seems more common in middle-aged to older cats, and its significance can vary dramatically on a case by case basis.”

The gallbladder, a small organ located between between the two liver lobes, stores bile from the liver and sends it through the bile duct into the small intestine. It aids with digestion, the absorption of fats and the elimination of waste products.

Gallstones are not usually present at birth. Several breeds are believed to be prone to developing calcium oxalate stones, including Burmese, Persians and Himalayans. The conditions that can predispose a cat to developing gallstones include:

– A high bilirubin level from pre-existing liver or gallbladder disease. Bilirubin, a brownish yellow substance in bile, is derived from red blood cells that the liver breaks down.

– An infection that allows the invasion of bacteria, cholecystitis, or inflammation of the bile ducts, can lead to failure of the bile to flow normally.

– Slow moving bile, which can also be a risk factor associated with hypothyroidism, diabetes mellitus and hyperadrenocorticism (Cushing’s disease).

– Increases in cholesterol and triglycerides, a type of fat in the blood. A high calcium or high-fat diet can hasten their development

Gallstones are often painful if they pass from the gallbladder through the bile duct into the intestine. Their size has been compared to small pepples. The stones might cause signs of biliary colic — an ache caused by blocked flow of bile. Affected cats will be intermittently mildly lethargic and suffer loss of appetite and mild vomiting. “I think cats show us signs more often than dogs because of their anatomy,” Dr. Miller says. “Cats have a unique anatomical feature called an ampulla, an area where their bile duct and pancreatic duct join together before entering the small intestine. Issues with the bile duct can also cause pancreatic inflammation.”

Dr. Miller cautions that cats don’t always show their pain in an obvious way, and vague signs of being occasionally “off” might be all that is noticeable.

Although gallstones that remain in the gallbladder aren’t painful, if they move into the bile ducts and become lodged, they can cause intense, sudden pain. As the stone moves, the pain typically goes away.

A cat can have asymptomatic gallstones with no abnormalities on routine lab tests. They might be visible only on an X-ray or ultrasound while the veterinarian investigates another problem. When cats are obviously ill, signs may appear in blood tests, including increases in liver enzymes, bilirubin and cholesterol. However, these findings are not specific to gallstones. An infection of the gallbladder could cause similar findings.

Asymptomatic gallstones generally do not require treatment. “If there is an infection with gallstones, then we treat with broad spectrum antibiotics and often with ursodiol, a drug that helps keep bile flowing normally,” Dr. Miller says.

Most stones don’t dissolve with treatment. “If the cat has an obstruction or infection, surgical removal of the gallbladder is recommended because the stones tend to reform. Each time stones pass though the bile ducts, there’s a risk of obstruction,” Dr. Miller says.