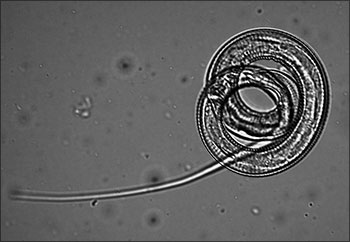 New research at Cornell University College of Veterinary Medicine has bolstered advice to keep cats indoors, allowing them outside only when they can be supervised to protect them from parasitic infection.
Veterinarians discovered unsightly half-foot-long worms in a 9-year-old domestic cat from upstate New York and a 14-year-old one from Pembroke, Mass. They’re believed to be the first two confirmed cases of cats in the United States infected by Dracunculus insignis, a parasitic worm that primarily targets raccoons and other wildlife. The findings were published earlier this year in the Journal of Feline Medicine and Surgery.

Protective Measures. “The cats that contracted the Dracunculus insignis worms likely ingested the parasites by drinking unfiltered water or by hunting frogs,” says Araceli Lucio-Forster, Ph.D., a parasitologist in the Department of Microbiology and Immunology, and lead author of the report. “Although rare in cats, this worm may be common in wildlife in certain areas, and the only way to protect animals from it is to keep them from drinking unfiltered water and from hunting. In other words, keep them indoors.” (The vulnerability of cats in other parts of the U.S. is not known. Dogs have been rarely been infected.)

Dracunculus insignis worms can grow up to one foot in length in a host. When the female is ready to deposit young worms into fresh water, it crawls out of the skin of the host through a blister-like protrusion in an extremity, such as a leg. The only way they can grow to infect another host, typically a raccoon or mink, is to mature inside a copepod — a tiny freshwater crustacean — which acts as an intermediate host.

The worms’ discovery and search for their identity sound much like a medical mystery novel. Credit two Cornell alumni, Jennifer Pongratz, DVM, and Sara Sanders, DVM, who have practices in Massachusetts and New York, respectively, for initiating the pursuit. In 2009, Dr. Pongratz’s clients brought to her attention a suspicious lump on the leg of their neutered male diabetic cat; a biopsy of the mass revealed a worm to be the cause.

Three years later, a client delivered Dr. Sanders a long worm she pulled out from the side of her cat with a history of pituitary dependent hyperadrenocortisism. During examination, Dr. Sanders discovered another worm was about to emerge. In total, four worms emerged from Dr. Sander’s patient over a period of about a month.

Search for Answers. In both cases, the cats had spent ample time outdoors. Curious about these unusual findings, the veterinarians turned to their alma mater for answers. They sought the expertise of Dr. Lucio-Forster and her faculty mentor, Dwight Bowman, Ph.D., professor of parasitology.

“With the help of our colleagues at the U.S. Centers for Disease Control, who helped with the confirmation of the identification of the worm, we were able to prove this was D. insignis,” says Dr. Lucio-Forster.

Dracunculus insignis is a slow-growing parasitic worm. Generally, it takes about a year from the time a mammal ingests the worm until it migrates to an extremity to create a shallow ulcer from which to emerge to lay live young worms, she says. The worms do not cause disease while in the cat but can be painful as they emerge through the skin. In addition, damaged or broken worms may trigger secondary infections in their host.

“Prognosis is very good, but the concern would be if the long worm was ruptured while still partly inside the body or if the area where the worm is emerging out of the skin becomes infected with bacteria,” Dr. Lucio-Forster says.

No medications are available today to treat Dracunculus infections; surgical removal of the worms remains the recommended treatment. Fortunately, both cats recovered completely after the worms were removed.

Nevertheless, the two cases emphasize the need to keep cats indoors and to keep them on year-round parasitic preventive medicines, Dr. Lucio-Forster says. “We do not think this parasite is cause for alarm; however, cats who are allowed outdoor access are at risk for roundworms and hookworms, and some parasites such as heartworms — which are closely related to Dracunculus — can be life threatening. For this reason, we strongly encourage cats to be kept indoors and on year-round parasite control for internal worms and external fleas and ticks.”

From Leafy Streams to Ocean Depths
Copepods, the intermediate host for the parasitic worm Dracunculus insignis, are crustaceans like crabs and lobsters. Their name derives from the Greek kope (oar) and podos (foot) because their antennae and legs move like oars when they swim. They are quite small, usually about the size of the head of a pin.

Their habitats vary “from fresh water to hypersaline conditions, from subterranean caves to water collected in bromeliad leaves or leaf litter on the ground and from streams, rivers, and lakes to the sediment layer in the open ocean,” says the Smithsonian National Museum of Natural History. “Ecologically they are important links in the food chain linking microscopic algal cells to juvenile fish to whales.”

Copepods also can act as controls for malaria by consuming mosquito larvae, and they’re intermediate hosts of many human and animal parasites like the one recently identified in cats at Cornell.