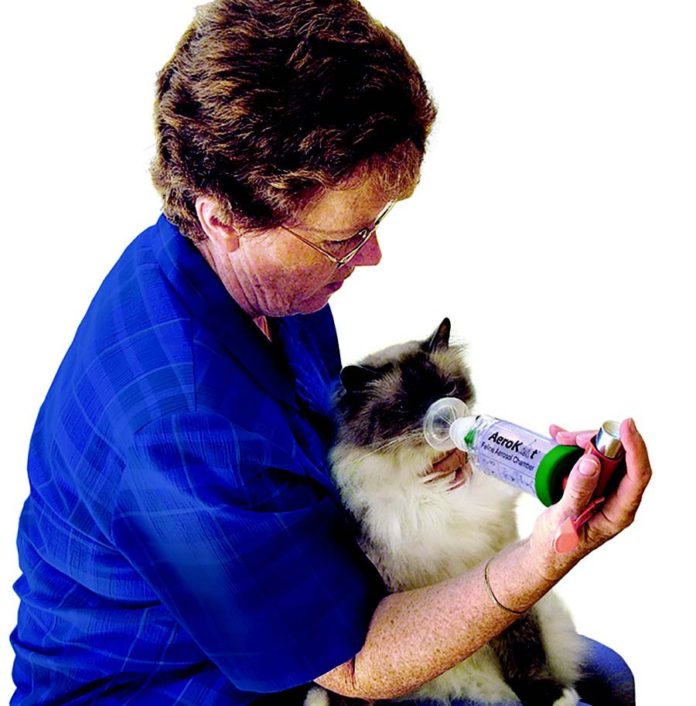 Coughing in cats is easy to dismiss as due to a hairball. While cats do get hairballs, that “gagging” can often be due to coughing. When cats cough, they usually crouch down, extend their elbows away from the body, and make a dry, hacking sound. The cough is frequently non-productive (nothing is expelled).

This cough should never be ignored, as it can indicate significant illness. Since the cough is usually intermittent, taking a 30-second video will help your veterinarian see what you’re seeing.

Prepare a detailed history for your veterinarian:

-When and how often the cough occurs

-Presence of mucus or discharge from the eyes, nose, or mouth

-How long the coughing lasts

Your veterinarian will evaluate your cat and listen to her heart and lungs. Heart murmurs, arrhythmias, wheezing, and crackling all may indicate a disorder that may require more testing.

While people and dogs with heart disease often cough, it is rare for a cat with only heart disease to cough. The most likely causes of chronic coughing in cats include parasites, pneumonia, asthma, and cancer.

The parasite Aleurostrongylus abstrusus is the most common cat lungworm. Cats are infected when they ingest intermediate hosts—slugs and snails. The larvae replicate within the lungs, causing a marked inflammatory response. A diagnosis of lungworms is based on clinical signs, physical examination, and a special fecal test called a Baermann.

Treatment for lungworms is with anti-parasiticides. A newer topical treatment for cats combines emodepside and praziquantel and is generally effective for treatment of lungworms. Other therapies, such as steroids and bronchodilators, will aim at decreasing lung inflammation while the worms die and the lungs recover.

Cats can be infected with heartworms, just like their canine counterparts, and can develop a syndrome known as heartworm acquired respiratory disease (HARD). HARD develops as the worms migrate through the cat’s body (this occurs more commonly in cats than in dogs), causing the most damage in the lungs. Symptoms are usually subtle and include coughing. Unfortunately, sudden death can occur.

Specific treatment of heartworms in cats usually is not attempted, as the drugs used to kill adult heartworms can be toxic to cats, worm burdens are generally low in cats (unlike in dogs), and the worms usually die off within one to two years (in dogs they live for a longer time).

Pneumonia is not common, but it may be spread by cat-to-cat interactions. The most likely organisms are the bacteria Pasteurella and Bordetella, commonly found in shelters and catteries. Both infections often begin in the upper respiratory tract and spread to the lungs, leading to pneumonia.

The diagnosis is based on a history of exposure and symptoms (fever, nasal discharge, cough), as well as x-rays, bloodwork, and, in some cases, bacterial culture.

In severe cases that do not respond to initial therapy, a bronchoalveolar lavage (BAL) may be recommended. This is a diagnostic test conducted under anesthesia to retrieve samples from the lungs for microscopic examination.

Likely the most common cause of feline cough, asthma is most frequently seen in young cats. Asthma can be triggered by many things, and in most cases, the cause is never identified. “Aeroallergens” (mold, pollens, smoke) are the usual suspects.

As in humans, asthma attacks can come on quickly, characterized by coughing and labored breathing. Loud wheezing may be heard. Cats having difficulty breathing constitute an emergency, and veterinary care should be sought out immediately.

The veterinarian may hear wheezing and the “squeak” of air moving through narrowed airways. When an asthmatic cat breathes, he struggles to expel air. X-rays often show hyperinflated lungs, a flattened diaphragm, and signs suggesting inflammation of the airways.

Initial treatment usually involves steroids, oxygen therapy, sedation to ease anxiety, and bronchodilators. A cat with asthma will likely always need monitoring and medications. Your veterinarian may recommend you keep a nebulization chamber at home for emergencies. This condition cannot be cured, but it can be managed.

Pulmonary carcinoma is the most common primary lung cancer in cats, usually found in older cats. Other types of cancer, however, can spread (metastasize) to the lungs of cats. Symptoms can be subtle (coughing, weight loss, and decreased appetite). Diagnosis is based on x-rays, computed tomography (CT) scans, and ideally, an aspiration of the mass with microscopic evaluation of the samples obtained. This may require a specialist.

It’s easy to dismiss a cough as a hairball or another benign condition, but it’s important to pay attention to a coughing cat and discuss the symptom with a veterinarian.