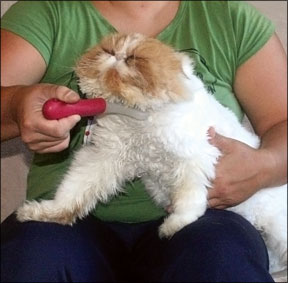 While it may seem unlikely to you (given the reputation cats have for personal hygiene and grooming habits), a trip to the groomers can sometimes become necessary for a badly matted cat. There are several factors which can contribute to the matting of a cats haircoat, two ways to deal with it – and one simple way to avoid it in the future.

Jana West, owner and operator of Shampooch, located in Savona, NY, has been grooming cats and dogs for eight years. West relates that the most common places for a cat to develop mats are on the back – near the tail, under the belly, along the hind legs and under the tail. She explains that there are three types of cats that

are more prone to developing mats in their haircoat: “The majority of the cats that have a problem are older cats, bigger cats or cats allowed to spend time outdoors.”

As cats age, grooming may become less important to them. In addition, cats with a weight issue may have more difficulty reaching certain areas of their bodies. And when it comes to outdoor cats, West adds, “Ideally, all cats would be kept inside and wouldnt come in contact with burrs and branches, but thats not always realistic.”

Besides making it more difficult for a cat to maintain his normal good looks, mats can become extremely uncomfortable. West explains, “Its uncomfortable because as the mats get bigger, they tighten more and begin to pull on the skin.” This can quickly become problematic for cats with chronic skin problems. If a cat has dry, sensitive skin, an unattended mat can easily cause a great deal of discomfort by pulling and itching.

So, what should you do if your cat becomes matted? West suggests first trying to comb out the snarl yourself: “I recommend using a comb as opposed to a brush because a comb does a more thorough job. Normally, you can tell just by feeling if its really close to the skin; the closer it is to the skin, the harder it is to comb out.”

West warns, “Using scissors to cut out mats is not a good idea because they can really harm the cat. A cats skin is very, very thin.” If it gets to the point where you either cant get a comb through the mat or you notice the cat is biting or licking at it in discomfort, its time to make an appointment with a professional groomer.

Are you concerned that your beloved kitty will be returned to you minus her beautiful coat? West offers some encouragement: “Actually, a groomer usually has more success combing out mats than an owner because they can work at it a little better, and they have more experience handling and restraining the cat during grooming.”

Another note of encouragement: “If it is a large bunch of hair, and its very tight, then a groomer can usually determine this right away and know that it has got to be clipped out.” (In other words, your cat will probably not need to be completely shaved!)

In fact, unless the cat has skin problems or is accustomed to being shaved – and the owner thinks that he is more comfortable that way – most groomers will not completely shave a cat. “Some cats are very mellow and dont seem to be bothered by it in the least; but sometimes it can be very traumatic for the cat,” West explains. “With most cats, you have a small window of time to work with them before they get very impatient.” Spots that do have to be clipped out can take anywhere from two to four months to grow back.

The most effective way to prevent future matting, according to West, is by combing the cats coat daily. However, even if daily combing isnt always realistic for your schedule, West advises getting the cat used to being combed and handled: “From the time the cat is young (if possible), begin handling the cat so it doesnt mind having its feet, tail, ears and belly touched.” If theyre used to being combed, it wont be a big ordeal if they do develop a mat and need to have it combed out.”

One final note of encouragement: While daily combing sessions may start out as chore time, you may find that they actually become cuddle time with your cat.