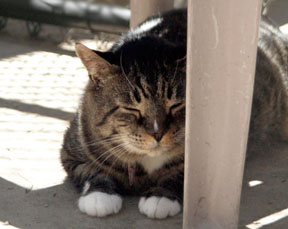 While its a good idea to keep your cat indoors as much as possible throughout the year, protecting the animal from the dangers that lurk beyond your doorstep may be especially advisable during the months between late spring and early fall, when temperatures can become scorchingly hot in many areas of the U.S.

During extremely hot, humid weather, cats are increasingly vulnerable to heat exhaustion and dehydration. They are more prone to infestation by fleas and other insidious parasites. They can be dangerously exposed to cancer-causing sun rays. And they are more likely to come in contact with such noxious substances as lawn chemicals, rotting garbage and the antifreeze that gurgles out of overheated automobiles.

In addition, notes James Richards, DVM, director of Cornell Universitys Feline Health Center and editor-in-chief of CatWatch, cats are at significantly greater risk for what he terms “the high-rise syndrome” – sustaining serious injury by leaping or accidentally tumbling from an open window high above ground level.

“All things considered,” says Dr. Richards, “your cat will be a lot better off during the hot months if you keep it indoors in a safe, secure and cool area.”

A major concern during the warmer months, says Dr. Richards, is heat exhaustion, a debilitating disorder that can easily progress to a potentially fatal attack of heat stroke. “This can be a big problem that may lead to multiple organ failure in any cat that experiences it,” he warns.

The condition most frequently occurs in cats as the result of being confined within an overheated area, especially if it does not have access to water or a cool space to which it can retreat. The initial signs of feline heat exhaustion include rapid panting, muscle weakness, staggering, rapid heartbeat, fainting, tremors and possible vomiting. Unless an animal that is experiencing heat exhaustion is cooled down immediately, heat stroke is likely to ensue.

When that occurs, the animals panting will become increasingly labored and rapid, and as it pants it will be pulling in air that, on an extremely hot day or within a confined space, is likely to be hotter than its normal body temperature (typically between 100.4 and 102.5 degrees). If the overheating (hyperthermia) is unrelieved and the cats body temperature reaches 105 degrees or higher, cell damage will start to occur, which can result in kidney, liver and gastrointestinal dysfunction, lowered levels of blood oxygen, destruction of skeletal muscle tissue, impaired brain function, heart failure and death.

Heat stroke requires emergency care. According to Dr. Richards, the cats owner should try one or a combination of the following techniques while making arrangements to transport the cat to a veterinarian as promptly as possible:

Wipe the cats body with a cool, wet rag. Don’t immerse the cat in cold water!

Apply ice to the cat’s head and inner thighs.

Move the cat to an air-conditioned room or to a room with a fan. If already en route to a veterinary hospital, run the car’s air conditioner or open the windows, but not so wide that it would allow the cat to escape.

Monitor the cats temperature constantly to assess whether efforts to lower its body temperature are succeeding.

When its temperature appears to be approaching normal, cease the aggressive cooling measures, which, if excessive, could result in a dangerously low body temperature (hypothermia). The stricken cat should be rushed to a veterinary clinic immediately for a thorough examination and any additional professional care that may be needed. This might entail, for example, intravenous fluid therapy to help restore circulation and correct chemical imbalances.

Obese cats and older cats with age-related conditions – such as advanced cardiovascular disease – are at greater risk for heat stroke than are younger, healthy animals, notes Dr. Richards, as are Himalayans, Persians and other densely coated breeds whose bodies are less able to dissipate heat. Also at elevated risk are brachycephalic breeds, those with flat faces and short noses, because they may lack sufficient nasal space for air to pass through and be cooled.

Following are some tips on how to ensure that your cat stays healthy and comfortable during hot months:

Never leave your cat alone in a car or other confined and poorly ventilated area on a hot, humid, sunny day.

Keep the interior of your residence comfortably air-conditioned and well ventilated during periods of extreme heat, whether you are at home with your cat or away for several hours.

Provide your cat with plenty of easily accessible drinking water.

If you like to leave a window open to ventilate your home or apartment, be sure to install a secure screen so that your cat cant fall or leap through it.

Dr. Richards also advises owners to minimize their cats exposure to bright sunlight, since the suns ultraviolet rays greatly increase the risk of squamous cell carcinoma, a type of malignant skin cancer that can spread uncontrollably. Most susceptible are white or lightly pigmented cats or those with white noses or ears. But all cats that habitually spend their days outdoors should be discouraged from basking for extended periods in harsh sunlight.

In addition, Dr. Richards notes that the ingestion of ethylene glycol – the main ingredient in most automobile antifreeze products – can cause serious damage to a cats system and can lead to death from kidney failure within 24 hours unless emergency treatment is given within a few hours after ingestion. Antifreeze, which apparently tastes good to cats, is commonly found during the summer months puddled in parking lots, where cars have overheated, and on garage floors. Cat owners should do their best to keep their animals away from the substance, Dr. Richards urges. Certainly, a cat should never be confined in a garage where the owner routinely changes antifreeze in the family car.

Finally, Dr. Richards advises owners to make sure that all of a cats vaccinations are up to date, he says and to arrange for routine veterinary checkups.