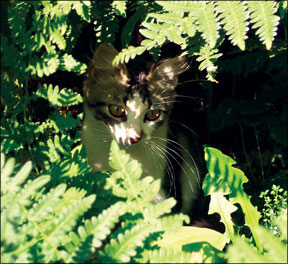 Q- I recently lost a three-year-old female cat to heartworm disease. I would like to see more information on what heartworms are, how to treat them, and most importantly, how to prevent these parasites from taking our precious cats. All of my cats are indoors, fixed, and go to the veterinarian yearly.

Most dog owners are quite familiar with this nasty little parasite, and for good reason: Dogs living in areas where the mosquito-borne disease is present are usually tested annually and placed on preventative medication either seasonally or all year round. Most cat people are completely unaware of the danger of heartworm disease. And of those who are aware, many erroneously believe that keeping their cats indoors will prevent infection. It doesnt, of course, as your experience confirms. In the United States, the highest prevalence of heartworm infection in both dogs and cats is along the Atlantic and Gulf coasts and in the Mississippi, Missouri and Tennessee River valleys. But it has been diagnosed in animals in all 48 contiguous states and is increasing in frequency in parts of the U.S. where it was previously considered uncommon.

Thankfully, many heartworm-infected cats never show any outward signs of disease. When the heartworm parasites do cause problems, the signs often mimic those seen in many other feline disorders: intermittent vomiting, coughing, breathing difficulty, neurologic signs (fainting, circling, blindness, seizures) or simply listlessness and a loss of appetite and weight. Its easy to see why feline heartworm disease is often misdiagnosed as asthma, bronchitis, any of the many forms of intestinal disease and a multitude of other cat diseases. One of the saddest consequences of feline heartworm disease is sudden death with absolutely no warning.

Mosquitoes are the Culprits

Over 50 species of mosquitoes are capable of transmitting heartworms. How readily the mosquitoes in a certain region are willing to feed on both dogs and cats influences the rate of feline infection. Heres how it usually happens: A female mosquito bites a heartworm-infected canine and ingests a load of microfilariae, the microscopic immature stages of the parasite existing in the bloodstream.

Over the next one to four weeks, the microfilariae in the mosquito molt into “L3” larvae; when the mosquito then bites a cat, the larvae (usually 10-12 of the squirmy little critters) are deposited into the skin and enter the body through the bite wound. After about three to four months of burrowing throughout the cats body, the larvae now in the L5 stage after two more molts begin to arrive in the lungs, where they induce an intense inflammatory response in the pulmonary vessels and lung tissue. This is when some of the more common signs wheezing, breathing difficulty, and vomiting are demonstrated. Oftentimes these signs subside after a few weeks or so.

However, if any of these larvae survived the inflammatory onslaught, they set up shop as adult worms living in the main pulmonary arteries. Many infected cats seem completely fine at this point that is, until the adult worms begin to die. The dying parasites cause more pulmonary inflammation and blood clots, which often lead to fatal lung injury the usual cause of sudden death in heartworm infected cats.

Feline heartworm disease is notoriously difficult to diagnose, requiring a combination of several kinds of blood tests that often need to be repeated periodically over the course of the illness, plus chest radiographs and ultrasound. Using medication to try to kill the adult worms is extremely dangerous, so supportive therapy carries the day for most cats in need of a little help. The worms dont live forever, and once theyre gone, normalcy or near normalcy eventually returns as long as the cat doesnt become infected again.

Summing up, diagnosis is difficult and treatment can be dangerous. Understandably, I believe heartworm prevention is the way to go. There are several easily administered, monthly heartworm preventative medications available for cats, but many veterinarians, including me, believe theyre underutilized. The American Association of Feline Practitioners and the American Heartworm Society have partnered together on a public information campaign called KNOW Heartworms. Our goal? To inform every cat person and veterinarian within our reach of the dangers of feline heartworm disease and the importance of preventive medication. You can find out more about the campaign and feline heartworm disease at the new Website, www.knowheartworms.org, which should be live by the time you read this. Well also be telling you more in an upcoming issue of

CatWatch. In the meantime, ask your veterinarian whether your cat should be receiving monthly heartworm prevention. v