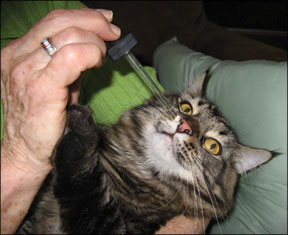 Just about all cats, at one point or another in their lives, will be bothered by fleeting bouts of runny nose and teary eyes. In most cats, these episodes are infrequent; they arise from time to time, disappear within a day or two, and are nothing for an owner to be deeply concerned about. In other cats, the unpleasant signs become chronic and may come and go with annoying frequency.

If a runny nose persists for more than a few days, especially if the cat is not eating or behaving normally and the discharge thickens and becomes darker in color, you should have your veterinarian examine the animal, says Dr. Fred Scott, professor emeritus of virology at Cornell Universitys College of Veterinary Medicine and founding director of the Cornell Feline Health Center. It could turn out that the cat is harboring a serious inflammation in its nasal passages caused by advancing viral or bacterial infection. Or worse, the problem could be a sign that the cat has a severe systemic disease requiring prompt medical attention.

In most cases, the bothersome tearing and runny nose will stem from an acute inflammation of the tissues somewhere within the animals nasal passages – a condition known as “rhinitis.” If the infection should become chronic, terms such as “sinusitis” or “rhinosinusitis” might be used to describe it. Noting that all of these conditions are related, Dr. Scott considers it acceptable to refer to them collectively as “sinonasal disease.”

A cats nose is an elaborate structure. Its interior – the nasal cavity – is enclosed by bone and cartilage and is divided into two narrow compartments by a thin wall of hard tissue (the septum), with each compartment subdivided into two additional areas. Also within the bones of the face are several sinuses – paired, hollow, moisture-secreting cavities that are connected to the nasal passage by small ducts. At the back of the nose, two nasal passages open into the throat (pharynx), which in turn connects to two tubes – the trachea, which goes to the lungs, and the esophagus, which goes to the stomach.

The nasal cavity functions as the gateway to a cats lower respiratory system. It is the portal through which oxygen-rich air is inhaled and filtered before passing to the lungs and through which oxygen-depleted air is exhaled. Most of the nasal cavitys interior has a corrugated surface that is lined with mucus-secreting tissue (mucosa). The shallow grooves and ridges on the tissue increase its surface area, and this provides an efficient filtration system. Particles in inhaled air that should not get into the lungs come in contact with the mucosa and get trapped there. In addition to filtering incoming air, the nasal cavity serves to humidify and warm inhaled vapors before they pass to the lungs.

Cats are subject to a wide range of sinonasal disorders, some significantly more treatable than others. Most severe among these disorders are cancerous tumors that originate in the nasal cavity, which are likely to cause extensive local obstruction and destruction. Fortunately, these cancers tend to respond well to radiation therapy if diagnosed and treated early.

Noncancerous masses of tissue (polyps) may also develop on the surface tissue of the nasal passages. “Polyps can be removed by means of a relatively simple surgical procedure,” says Dr. Scott. “The challenge is to find them and to be able to get at them, because the feline sinonasal structure is so tiny.” An additional threat to the nasal passages is the presence of foreign bodies, such as a needle and thread or a blade of grass, that may become lodged in the cavity and interfere with an animals air intake.

The most frequently observed nasal disorders in cats, however, develop as the result of upper respiratory tract infections with one or both of two viruses – feline herpesvirus (FHV) and feline calicivirus (FCV). Sinonasal inflammation caused by these viruses usually subsides within a few days. However, infection with FHV predisposes a cat to recurrent episodes of distress, Dr. Scott points out, because this virus destroys the cells that line the nasal passage, which in turn allows secondary bacterial infection to occur. “Herpesvirus,” he notes, “doesnt go away. It takes up residence in the facial nerves and remains there in a dormant or latent state, and it can be reactivated repeatedly from time to time in a cat that is under stress. When the virus is reactivated, it may cause sneezing and a runny nose for a few days, but then goes back up the nerves and becomes dormant again. Chronic respiratory infection is very frustrating for veterinarians to treat, because it keeps coming back.”

Other microorganisms that may infect the sinonasal structure include various bacteria, chlamydia and certain funguses. “The prevalence of these funguses in the environment depends on what area of the country you live in,” says Dr. Scott. “Some of them can be very nasty. They can cause significant sinonasal disease and will require an accurate diagnosis and specific treatment.”

To complicate matters, infection with feline immunodeficiency virus (FIV) and feline leukemia virus (FeLV), although not directly associated with nasal disease, may compromise a cats immune system and thus make it more susceptible to sinonasal infection.

The most telling sign of a viral, bacterial or fungal infection, says Dr. Scott, is persistent discharge from an affected animals nose and eyes. In the initial stage of infection, the discharge is clear and watery, he notes. But as the infection progresses, the fluid may carry increasing amounts of mucus and pus and may become thick, opaque and yellowish-green. And if the infectious organism has caused enough damage, some blood may be visible in the discharge, because the capillaries are close to the mucosal surface.

“This purulent discharge,” says Dr. Scott, “can interfere with a cats breathing. Sometimes they will resort to open-mouthed breathing, and theyll make various noises that indicate that theyre having trouble taking in air.” Feline breeds with flat faces and, as he puts it, “a very short nose system” – Persians, for example – may be especially at risk for this difficulty.

Regarding the treatment of sinonasal disease, Dr. Scott says: “If the signs of herpesvirus infection are observed in the eye, the veterinarian might use an antiherpetic drug to block its replication and prevent ulcers from occurring. In most cases, however, the diagnosis is much simpler and treatment will rely most importantly on general supportive care. For cats that are sneezing and have nasal discharge, the veterinarian will usually prescribe antibiotics to treat secondary bacterial infection.”

Dr. Scott notes, however, that treating chronic sinusitis with antibiotics can be “very frustrating.” The sinuses, he explains, “are small, empty air spaces connected to the nasal passage by tiny ducts, and its difficult to get antibiotics into them in enough concentration to completely destroy the infection. So you treat the cat with antibiotics and decongestants and it gets better – and three weeks later its back with the same sinus infection.”

To reduce the risk for sinonasal disease, Dr. Scott advises: “Have your cat vaccinated for herpesvirus and calicivirus, and prevent the animal from being exposed outdoors to unvaccinated cats. If your cat has a runny nose for a few days and is eating normally, I wouldnt be concerned about it. But if the signs persist and the animal is lethargic and off its food, you should have it checked out by your veterinarian.”