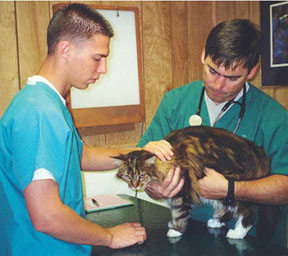 First, it is important to distinguish between incontinence and inappropriate urination. True incontinence occurs when a cat does not have voluntary control over urination; trauma, a weak primary sphincter muscle and congenital abnormalities are the most common causes of incontinence. Inappropriate urination is much more common than true incontinence; this may be a behavioral problem or it may be the result of an underlying medical condition. The most common medical cause of inappropriate urination is inflammation of the urinary bladder. While the root causes often vary significantly, the signs – called lower urinary tract signs or LUTS – are similar: frequent urination, excessive licking of the genital area and difficult or painful urination. The actual diagnosis can range from a urinary tract infection to urethral blockage.

It is extremely important to seek veterinary care if your cat exhibits these signs – do not assume that the animal is simply constipated. If he is suffering from urethral blockage, he may lose consciousness and die within a day or two of complete blockage.

On the other hand, it may turn out to be something as treatable as a urinary tract infection. To begin with, your veterinarian may ask several questions:

When did the signs first appear?

Has the cat been under unusual stress lately? (e.g. a move, new pets, a change in diet)

Has the cat been drinking more water than usual?

Where does the cat urinate? (e.g. on your bed, in the corner or where she was sleeping)

Is there a history of trauma?

Is there blood in the urine?

The physical exam itself will reveal whether or not the bladder is distended; an enlarged bladder may be indicative of urethral blockage. This is more common in male cats than in females because their urethra is longer and narrower. Blockage may be caused by urinary stones or urethral plugs. Urinary stones are hard mineral formations that are found in the bladder and urethra; they are generally composed of either struvite or calcium oxalate.

According to Dr. Christine A. Bellezza, consultant for the Feline Health Center at Cornell Universitys College of Veterinary Medicine, struvite stones in the bladder are generally dissolved by altering the cats diet; however, “It doesnt always work. Many believe that the treatment for dissolving struvite stones may increase the propensity to develop calcium oxalate stones, which cannot be dissolved with dietary therapy.” If a stone-dissolving diet does not eliminate the stones, they may be flushed out of the bladder or removed surgically. Struvite stones in the urethra are usually removed by passing a catheter into the urethra, dislodging the obstruction. Urethral plugs can also cause obstruction of the urethra and are composed of minerals, cells and protein; they are removed in the same manner as urethral stones.

Polydipsia (drinking excessive amounts of water) is a key sign of many underlying diseases, including kidney failure, diabetes, hyperthyroidism and Cushings syndrome. When a cat drinks more water than usual, it can put undue pressure on the primary sphincter muscle. An ordinarily continent cat may begin to leak urine in response to the increased pressure. Generally, successful treatment of the underlying problem will rectify the incontinence.

The most common cause of true incontinence in cats is neurologic trauma. Dr. Bellezza states: “Tail pull avulsion is an injury where the tail is pulled and the nerves in the spine that control urination, defecation and/or movement of the hind limbs are damaged. The most common cause for this type of injury is the tail being run over by a car or the tail being caught in a door.” Immediate veterinary care may help reduce the extent of permanent nerve damage.

With careful observation and veterinary treatment, a cat that is experiencing incontinence or is urinating inappropriately can usually be returned to his normal daily routine. Once the cause of discomfort is determined, treatment is generally quite simple. And a healthy cat is a happy cat!