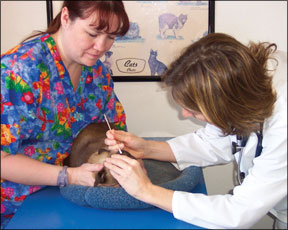 The feline eye is a complex arrangement of delicate structural components that, in a normal, healthy creature, operate in exquisite harmony to enable a cats typically keen vision. Unfortunately, the feline visual apparatus is vulnerable to injuries and a variety of diseases that can diminish a cats visual acuity or, in the worst cases, render it partially or totally blind.

According to Thomas Kern, DVM, associate professor of ophthalmology at Cornell Universitys College of Veterinary Medicine, cat owners would do well to understand the basics of feline visual anatomy and the signs that something has gone wrong with an animals vision. They should also understand the importance of having a cats eye health routinely monitored by their veterinarian.

In most respects, the feline eye functions just like the human eye and is made up of the same components, such as the

cornea (the transparent outer covering of the front of the eyeball); the pupil (the opening in the center of the eye that permits the entry of light from the environment); the iris (the round, pigmented membrane that surrounds the pupil and contracts or expands to regulate the amount of incoming light); the lens (which adjusts its shape as needed to focus the light rays); and the retina (a sensitive membrane that lines the interior surface of the eyeball, receives the focused light that has entered through the lens and sends visual information along to the brain via the optic nerve, which is attached to the back of the retina).

As structurally similar as they are to human eyes, cats eyes have certain distinctive features that substantially improve their chances for survival as animals that often find themselves, as circumstances dictate, either predator or prey. For example, says Dr. Kern, “A cats motion-detection capability is considerably better than that of ours. They can spot a moving object something that they might want to pursue or escape from at a far greater distance than we can.”

Among the anatomical characteristics of the feline eye that are not shared with humans is a third eyelid, a thin, pale membrane positioned at the inner corner of the eye, between the lower eyelid and the eyeball. This extra eyelid helps keep the surface of a cats eyeball moist, and can help shield it during a scrap with a rival cat or other animal.

Another special feature of the feline eye enables a cat to see especially well in dim light or near-darkness just before sunrise, for example, and at dusk, the perfect times for hunting squirrels, mice, chipmunks and other desirable prey. This ability is due to the fact that the feline retina, compared to the human retina, is densely packed with rods photoreceptor cells that respond to dim light.

In addition to a rod-packed retina, cats have a specialized reflective layer of tissue beneath the retina that reflects incoming light. This structure the tapetum lucidum reflects light forward through the retina, in essence giving the light a second chance to be detected by the retina. Researchers estimate that, thanks to all these distinctive features, a cats sensitivity to light is about six times greater than a humans.

Many of the disorders that threaten feline vision also afflict humans. These disorders include cataracts, in which the lens gradually clouds up often impenetrably and prevents light from entering the eye; glaucoma, a condition marked by increased fluid pressure within the eyeball that can cause it to harden; progressive retinal atrophy, in which the retinal tissue degenerates and loses its ability to function properly; and a variety of tumors either malignant or benign that develop within the eye or near to it.

A host of other feline eye diseases are attributable to viruses, bacteria and fungal organisms that specifically target cats such as feline immunodeficiency virus (FIV), feline leukemia virus (FeLV), feline infectious peritonitis (FIP) virus, feline herpesvirus (FHV), toxoplasma (a parasitic organism) and cryptococcus (a yeastlike fungus commonly found in soil). As causes of blindness in cats, Dr. Kern notes, “These are the well known, well described agents, although there are possibly many others.”

One occasionally observed feline disorder that is unique to cats and does not occur in humans, says Dr. Kern, is corneal sequestrum, a condition characterized by the formation of a black or dark brown plaque on the corneal surface, possibly the result of viral or bacterial infection. Signs include blinking, squinting, excessive tearing and prolapse of the third eyelid. Typically affecting only one eye, the plaque must be surgically removed. Unfortunately, the condition may recur.

Among all feline eye disorders, he says, the one most frequently treated at the Cornell University Hospital for Animals (CUHA) is conjunctivitis, an inflammation of the conjunctiva the mucous membrane that lines the inner surface of the eyelid and part of the outer surface of the eyeball. This condition, usually a byproduct of an upper respiratory disease caused by either a bacterial or viral organism, is endemic in most cat populations, he notes. The disorders clearest sign is runny eyes, and it is readily curable if treated promptly.

The second most frequently diagnosed eye disorders at CUHA, says Dr. Kern, are corneal ulcerations, sores on the surface of the eye that most frequently develop as the result of scrapes and tears. Because the cornea is the outermost layer of the eye, it can be readily scratched during fights with other animals, nicked by thorns in the underbrush or injured by foreign bodies that lodge beneath the eyelid.

Third on the list of most frequently observed feline eye disorders, Dr. Kern points out, is an especially serious condition called uveitis. This disorder is marked by inflammation of the uvea, the middle area of the eye that is made up of the iris, the ciliary body (which produces the fluid inside the eye), and the choroid (which supplies nutrients to the retina). This disease which is most often associated with FIV, FeLV, FIP and other infectious agents is usually chronic and is likely to result in gradual blindness. Among its signs are inflammation of the eyeball, squinting, tearing and swollen third eyelids.

Another disorder that often leads to blindness is retinal detachment, a condition in which the retina becomes separated from its underlying tissue, typically resulting from a leakage or oversupply of fluid between the two layers. Retinal detachments are most frequently associated with high blood pressure, an overly active thyroid gland or kidney disease. In some cases, prompt and proper veterinary treatment can restore partial vision to a cat with a retinal detachment, but in most cases, permanent blindness will result. In addition to a grossly dilated pupil, a major sign of this disorder is the sudden onset of blindness.

As is the case with virtually all feline ocular diseases, the earlier a cats vision problems are diagnosed, the better they may be treated unless, of course, an animals blindness has already become irreversible by the time veterinary care is pursued.

The signs of failing or lost sight may be behavioral. A visually impaired cat may, for example, become less mobile, bump into familiar objects, sleep excessively, and appear to have trouble finding its food bowl and litter box.

“But the behavioral signs may be too subtle,” Dr. Kern points out. “So the owner should routinely check the animals eyes, noting changes in the appearance of either eye. Look for changes in the color of the iris or see if the eye seems to be cloudy or the cats two pupils dont resemble one another. Such changes can reveal problems before they reach an irreversible stage. So look for anything unusual and get it checked out by your veterinarian.”

Early treatment, he says, may prevent or delay the onset of blindness. For example, he notes: “If toxoplasmosis is found to be causing the vision problem, we can treat the animal systemically, and the eyes are apt to respond well. In some cases, we can treat a cats hypertension and thereby slow down the rate at which the eyesight is failing. And we can sometimes get a detached retina to reattach itself.”