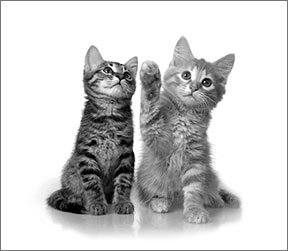 Cats can harbor a variety of zoonotic diseases — those that can be transmitted to people. Some of the diseases are rare, while others are quite common. Although we are aware of many of these diseases, more continue to be discovered, thanks to improvements in technology and to the dedicated work of researchers in both the human medical and veterinary fields.

Only recently, for example, has the veterinary community recognized that Staphylococcus (staph) bacteria can be transferred from animals to their owners.

“When an animal has an active staph infection, the organism can get on the hands of people who touch the infected area,” says dermatologist William H. Miller, VMD, Medical Director of the Companion Animal Hospital at the Cornell University College of Veterinary Medicine. “The organism can be transferred to a human if the person doesn’t wash his or her hands. If there is an immunocompromised individual or child in the house, we recommend that they stay away from the animal while the infection is active.”

Antibiotics are typically used to treat staph infections, but some strains are resistant to standard antibiotics, and a different course of treatment might be needed.

Transmission of staph infections, like many other zoonotic diseases, can be easily prevented with good hygiene. “In all my 37 years of treating staph infections in animals, I have never gotten an infection because I wash my hands during and after examining each animal,” Dr. Miller says.

Staph is also what is known as an anthroponotic disease — otherwise known as reverse zoonosis. That means that in addition to moving from animals to humans, it can also be transferred from humans to animals.
In fact, according to Armando Hoet, DVM, Ph.D., Director of the Veterinary Public Health Program at Ohio State University, reverse zoonosis is the main concern with staph infections. “With cases of staph infections rising in the U.S. [in humans], we are starting to see spillover to the companion animal side,” says Dr. Hoet, who is board certified in veterinary preventive medicine. “We’re seeing more cases [in pets], but it’s not because it’s circulating more in the animals. It’s circulating more on the human side. The dogs and cats tend to be the victims.”

One problem: Not all zoonotic diseases exhibit observable symptoms. “Owners should know that animals can carry infectious agents, such as toxoplasmosis, without any signs of disease,” Dr. Miller says. “Good personal hygiene, routine worming of pets and prompt investigation and treatment of any disease process in the pet will minimize the frequency of a zoonotic disease.”

These are among the diseases that can undergo cross-species transmission:

Cat Scratch Disease
Cause: The bacterium Bartonella henselae, often transmitted to humans by a scratch or a bite. Kittens are likely to be infected and pass the bacteria to people, who may develop a mild infection at the point of injury. Affected cats show no signs of illness, so it’s wise to avoid rough play with cats, especially kittens, and immediately clean any bites or scratches.

Toxoplasmosis
Cause: The Toxoplasma gondii parasite. The disease passes to people in contaminated cat feces. Most exposed people don’t get sick, though some develop flu-like symptoms. Pregnant women are of greatest concern because the disease can pass to the fetus and cause defects. Pregnant women should avoid cleaning litter boxes or working in the garden where cats may defecate, and all owners should thoroughly wash their hands after coming in contact with cat feces.

Leptospirosis
Cause: The Leptospira spirochete bacteria. The infection can spread throughout the body, infecting the liver, kidneys, central nervous system, eyes and reproductive system. The extent of infection depends on the strength of your cat’s immune system. Cats typically contract the disease from contaminated water, soil or mud, or contact with an infected animal’s urine.

If your cat is undergoing treatment for leptospirosis, prevent its spread to humans by wearing gloves when handling your cat, avoiding contact with his bodily fluids and washing your hands often. A vaccination for leptospirosis is available for cats. In humans, leptospirosis can cause fever, aches, chills, abdominal pain, diarrhea, vomiting and rashes. Severe cases can cause kidney or liver failure.

Rabies
Cause: A bite from an animal infected with the virus, which attacks the nervous systems of animals and people — and can be deadly to both. The disease is 100 percent preventable via vaccination and almost always fatal in unvaccinated pets. In humans, it’s possible to prevent rabies infection if a series of shots is given soon after a bite. Once symptoms appear, the person rarely survives the disease.

“Fortunately, rabies isn’t as common in the U.S. as it used to be,” says Jeanette O’Quin, DVM, MPH-VPH, in the Department of Veterinary Preventive Medicine at Ohio State. However, there has been an increase in rabies in raccoons in the Eastern United States in recent years, she says. “That increases the risk in that area for pets and people.”

Mites
Cause: Certain parasites, such as scabies and Cheyletiella. They can result in skin irritations and infections in pets, and be transmitted to people, who can develop an itchy rash. Because mites usually won’t reproduce on humans, symptoms should resolve once the mites are cleared from the household and pets.

Ringworm
Cause: A fungus triggers this skin and scalp disease. Characterized by hair loss and a red, variably itchy rash, ringworm can be transmitted from a cat to a human via contact with an infected animal’s skin or hair. One difficulty: It’s possible for a pet to carry ringworm spores and not show any symptoms.

Roundworms
Cause: The common intestinal parasite Toxocara cati. Roundworms aren’t particularly harmful to adult cats, but a large number of the parasites can be life threatening to kittens and debilitated older cats. In the case of a small number of worms, there may be no outward signs of infection.

The disease in humans — called toxocariasis — can be contracted through contact with a cat’s feces. Children are at an increased risk. Toxocariasis is one of the top parasitic causes of blindness in children in the U.S., says Dr. Hoet at Ohio State. “And it can be completely prevented just by deworming your pets on a regular basis. However, other pets can contaminate areas like yards, gardens and open play areas, so parents should prevent kids from getting dirt in their mouths, and make sure that they wash their hands after playing outside.”

Hookworms
Cause: Several species of parasites. Kittens are especially likely to have hookworm infections and can pass hookworm eggs in their stool. Eggs or larvae can enter the human body via direct contact with contaminated stools or dirt, and the infection can be painful, with itchy skin infections or intestinal bleeding and inflammation. As with roundworm, transmission can be prevented by avoiding contact with potentially infected feces or dirt, and through regular deworming of pets.

Salmonellosis
Cause: The bacteria Salmonella. Although most commonly transmitted through contaminated food, Salmonellosis is also a pathogen that can be spread from animals to people and from people to animals via contaminated feces. It lives in the intestinal tract of many animals.

Salmonella germs are shed in animals’ feces and can easily contaminate their environments. People can also get a Salmonella infection if they don’t wash their hands after contact with infected animals or their environment. Signs of Salmonellosis in people include diarrhea, fever and stomach pain lasting a week. However, infections can become more severe and require hospitalization.

“The diseases mentioned here and in the sidebar have existed in cats for years and yet their actual zoonotic potential is small,” Dr. Miller says. “Why? Good personal hygiene and common sense. If the cat is ill, take him to his veterinarian so the cause for the disease can be found and corrected. Hand washing with plain old soap and water can’t be stressed enough.” ❖