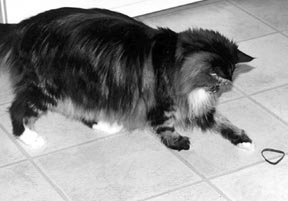 Playing with our cats is one of the great joys and benefits of having a cat, for both our cats and for us. Cats play with each other (social play), and with objects sometimes manipulated by their humans (object play). But the reasons for each type of play are actually quite different.

Why Do Cats Play?
If our cats are well fed, then why do they continue to hunt toy mice and chase feathers at the end of a plastic wand? Sarah Hall, PhD, looked at this question in Object Play by Adult Animals published in Animal Play.

Dr. Hall studied the play patterns of domestic cats while at the Anthrozoology Institute, School of Biological Sciences at the University of Southampton in England. She found hungry cats were more likely to play with objects than cats that had just been fed, suggesting that the play motivation in adult house cats is  linked to their instinct to hunt.

In another study, Dr. Hall examined what determines the intensity of cats play, and found that two specific factors are involved. The length of time between play sessions is critical because cats play more intensively when short intervals exist between play sessions. Also of significance is the overall sensory value of a toy: The more a toy stimulates the senses of a cat, the more likely she will play.

Pam Johnson-Bennett, author of several books on cat behavior, including Think Like A Cat, recommends simulating the movement of a cats prey while playing with your cat. I try to imitate something real based on the type of toy I am using, says Johnson-Bennett. If I am using a bird-type toy, I try to make the movements like a bird. Cats respond to fast, erratic moving items that move away from them, similar to prey.

Johnson-Bennett also recommends occasionally stopping the toys motion for a kill, because a toy in continual motion can be frustrating for a cat. It is natural for cats to stalk their prey, wait for a stop in movement and then pounce. Its important to provide your cat with successes during play. I allow many little captures so the cat does not get frustrated, and I always let him have that great, grand capture at the end, says Johnson-Bennett.

Vital for Overall Health
Practice for hunting is not the only reason why cats play. I think they enjoy it, says Marc Bekoff, PhD, of the University of Colorados biology department, an expert in animal play and author of Minding Animals. They play evolutionarily because it serves many important functions, says Dr. Bekoff. He believes that play in animals is important to their physical, emotional and cognitive development.

Play also turns out to be a good indicator of a cats health. I have talked to humane societies, and one of the great litmus tests they use to determine if an animals well-being is compromised is to see whether they have stopped playing. The British Columbia Society for the Prevention of Cruelty to Animals now has a six-level scale that measures well-being for animals. Play is one of them. If you do not see play, you may be dealing with an animal who is not physically well, says Dr. Bekoff.

Besides helping keep our cats physically fit, studies have shown that young animals deprived of play have suffered emotionally, cognitively and physically, according to Bekoff. Play also acts as a stress reducer.

Play can be equally beneficial for cat owners. In Between Pets and People, Alan Beck, PhD, executive director of the Center for the Human-Animal Bond at Purdue University, and Aaron Katcher, MD, professor emeritus at the University of Pennsylvania, write about how play with pets is special because it is non-competitive. There are no winners or losers, and it can serve as an escape from the stresses of everyday life.

Science has demonstrated what cats and their guardians have known all along: Interactive play is good for each player. The challenge is to find the time each day to enjoy these benefits.