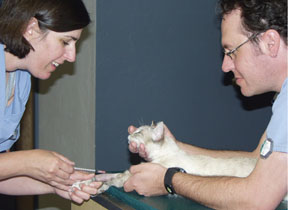 As far as you can tell, your six-year-old cat, Lucretia, has never had a sick day in her life. If she has, shes certainly never shown any signs of it. Nevertheless, youve dutifully made a point of taking her to her veterinarian for a routine physical exam twice a year, just to make sure shes up-to-date on her vaccinations and is not harboring any obscure and subtle systemic anomaly that could eventually prove troublesome.

Youre doing the right thing, says William Miller, VMD, medical director at Cornell Universitys Companion Animal Hospital, and all cat owners would do well to follow suit. “Its a very good idea to have every cat undergo a twice-yearly exam,” he says. “This is especially true for geriatric cats – those that are age 10 and older – and for animals that spend time outdoors and are exposed to a host of feline diseases.” A thorough checkup should also be obligatory, he advises, for any new cat that is brought into a household and for kittens when they reach one year of age.

Owners should know what is involved in a routine examination. They should also know that a standard exam, which could cost in the neighborhood of $100, is, in Dr. Millers words, “a very cost-effective step in preventive medicine.”

The routine physical exam will typically include four elements: a medical history of the patient, a physical examination, a complete blood count and a blood serum chemistry panel. In addition, many veterinarians will also do a urinalysis in the routine exam, especially for a geriatric patient.

A veterinarian will conduct this initial phase of the exam by reviewing the results of a cats previous clinic visits, if available, and by interviewing its owner. The veterinarian will be especially interested in possible signs of illness, such as a noticeable change in an animals eating or drinking patterns or in its elimination activity.

In this phase of the exam, the veterinarian – or sometimes a veterinary technician – will check the animals temperature, pulse and respiration. The veterinarian will then give the cat a thorough going-over, from the tip of its nose to the tip of its tail, checking its eyes, ears, nose, teeth, skin and the quality of its hair coat.

The chief function of feline blood, like that of human blood, is to carry oxygen and nutrients to the body tissues and to transport carbon dioxide and wastes away from them. It also serves in such processes as cell development, tissue repair and the warding off of infection. Also like human blood, feline blood is made up of red blood cells (erythrocytes), white blood cells (leukocytes), platelets and a colorless fluid (plasma) in which these and other life-supporting blood components – such as hormones, proteins and salts – are suspended. The complete blood count – commonly referred to simply as “CBC” – is a way of determining whether all of these ingredients are present and properly balanced in a cats system.

A red blood cell count measures the actual number of red cells in a given amount of blood and discerns any abnormalities in their shape, size or color. The amount of hemoglobin – a substance that transports oxygen throughout the bloodstream – is also assessed.

A white blood cell count evaluates and counts the number of leukocytes (including lymphocytes, neutrophils, monocytes, eosinophils and basophils), all of which are produced in the bone marrow or other tissues and play various roles in attacking and destroying disease-causing organisms. A high white-cell count might indicate, for example, that an animal is harboring an infection, is under extraordinary stress or is affected by a serious and chronic illness, such as leukemia.

The blood serum chemistry panel focuses on the chemical components suspended in the clear, watery content (serum) of the blood after it has been separated from the cells and from certain proteins that are needed for clotting.

Elevated amounts of amylase may indicate kidney or pancreatic disease.

Abnormal calcium levels may indicate the presence of tumors, kidney disease or other disorders.

Low levels of potassium may explain an animals chronic lethargy or lack of muscle strength.

Often done routinely, this test is obligatory when other phases of a routine exam suggest the presence of a kidney or urinary tract disorder. In this test, a sample of a cats urine is assessed for its clarity, color and density. It is tested biochemically to measure the levels of its important ingredients, such as protein and glucose. And it is examined microscopically for the presence of blood cells, bacteria, crystals and other deposits. If, for example, a cat has a bladder infection, says Dr. Miller, “Youll find that theres a lot of pus in the urine.”

An entire physical exam will usually take a half-hour or less, depending on the extent to which the patient is compliant. “The process of getting a blood sample from a cat can range from a piece of cake to all-out warfare,” says Dr. Miller, “so the length of time needed to collect it will vary.

“But assuming that the patient is cooperative, you can do an entire exam, start to finish, in 15 minutes.”