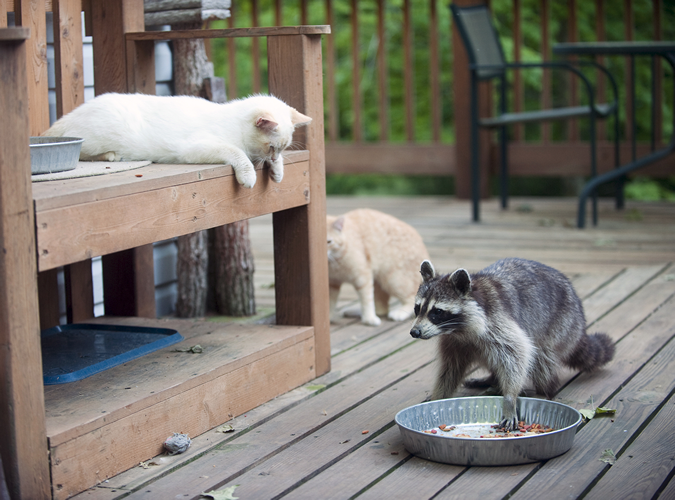 We tend to associate rabies with dogs, but rabies cases reported to the Centers for Disease Control and Prevention (CDC) show that far more cats than dogs contract rabies. In 2015, 67 rabid dogs and 244 rabid cats were reported to the CDC; in 2017, rabies was found in 62 dogs and 276 cats.

“Cats were the most frequently reported rabid domestic animal in the United States during 2017 and have been so since 1992,” says the Journal of the American Veterinary Medical Association. “The percentage of tested cats found to be rabid in 2017 was the highest it has been since 2008. Most of the rabid cats were reported from states where the raccoon rabies virus was considered enzootic.”

Rabies is deadly, and even minor exposure can result in infection. The rabies virus travels along nerve pathways to the brain in mammals. A diagnosis can only be confirmed after death, with an examination of the brain, which is why it’s so important to catch a suspected rabid animal.

But odd symptoms are known to occur, too. Rabid cats may begin to act vicious, scratching and biting, but some individuals instead become affectionate. Wild animals may lose their fear of humans. Nocturnal animals may be seen in daytime.

Obviously, outdoor cats and cats living in feral colonies or working as barn cats are at a higher rabies risk, but even indoor cats can be exposed to rabid bats that get into the house. Still, despite a nearly 100% effective rabies vaccine, many cat owners neglect this shot and there’s little to stop them. Few communities license cats the way they do dogs, requiring a rabies vaccine. Even fewer have feline leash laws. Cats who are allowed outside access commonly roam about freely, making the likelihood of close contact with wildlife higher than with dogs.

Cat and raccoon encounters are the most common way for rabies to be transferred to a cat. The virus can enter the cat via infected raccoon saliva when the cat is bitten. The virus will often replicate in muscle cells but then travels along neural pathways to the brain. In cats, symptoms may take as long as a month or longer to become evident, depending upon the severity of the bite wound, how much virus was transmitted, and how far the bite wound is from the brain. Once signs appear, the disease progresses rapidly and is fatal.

The rabies virus is always present in the saliva of an infected cat. If that cat bites a person, that person will be infected.

Rabies incubation times vary for a cat who has been bitten by an infected wild animal. The average is about two months, but the scientific literature suggests a range from two weeks to months or even years in rare cases. This variability can result from the amount of virus transmitted to the cat as well as the severity and location of the bite wound.

During this time the virus is migrating to the brain and salivary glands. The rabies virus is already present in the saliva before the cat will start to show signs of illness, so if that cat bites a person the person will be infected. The cat will show clinical signs within 10 days of the virus being shed in the saliva.

Rabid cats tend to show the “furious” form of the disease—aggression with vicious biting, clawing, and attacks—about 90% of the time. While any change in behavior can indicate rabies infection, the furious form is divided into three sets of clinical signs.

The Prodromal Phase. In this first phase, signs can be mild and nonspecific, lasting 12 to 48 hours. Your cat might have a fever, miss her meals, and show some gastrointestinal upset. Changes in behavior, such as aggression, avoidance of contact with people, or unusual affection, may appear but can be easily overlooked.

The Furious Phase. In this second phase, cats may suddenly attack, demonstrate increased vocalizations or aimless pacing, and may experience seizures. If the infecting bite is near the head, problems swallowing, unusual eye movements, and tongue paralysis may be observed. Bites on the legs may first manifest as an ataxic gait or seizures.

The Paralytic Phase. About five days after the first clinical signs, the third and final phase usually begins. It involves paraparesis (partial paralysis of the lower limbs), incoordination, generalized paralysis, coma, and death. While most cats die in three to four days, the clinical span of the illness can range from one to 10 days.

Keeping your cat indoors may help protect your cat from rabies, but cats can and do escape, and bats will enter houses. The ideal protection is vaccination. The American Association of Feline Practitioners does not currently consider rabies to be a core vaccine, meaning it is suggested only for cats whose lifestyles may expose them to other rabid animals. Rabies vaccination of cats is, however, required by law in some states. Other veterinary organizations believe rabies should be a core vaccine.

Vaccine options include killed virus vaccines or a recombinant canary pox virus vaccine. Kittens may have maternal antibodies for rabies present from colostrum (first milk) from their queens until 12 to 16 weeks of age, and since these may interfere with the effectiveness of vaccines, vaccination schedules usually extend beyond this period (i.e. older than 16 weeks of age). Most commonly, a booster will be given one year later and then boosters every three years. Vaccine-induced antibodies reach a peak about four to eight weeks after vaccination.

Vaccinations are considered a potential cause of feline injection site sarcomas (FISS), a relatively rare but aggressive form of cancer that occurs in approximately 0.001 % of cats that are vaccinated. Due to the risk of FISS, rabies vaccines are most commonly administered either below the stifle (knee) in the right hind limb or in the tail to facilitate easier surgical tumor removal in the unlikely event that FISS develops.

It is important to remember that the incidence of FISS is not high, and that the risk of not vaccinating a cat for rabies is almost always greater than the risk of FISS developing. A cat who is bitten by a rabid animal and not current on vaccinations may be required to be boarded securely under quarantine for 10 days (depending on law) or to be euthanized. If an unvaccinated cat with the potential for being rabid bites a person, many areas will require euthanasia so tissues can be tested for rabies to determine if human post exposure vaccination is required.

If a cat not up to date on rabies vaccination dies within 10 days after biting a person, regardless of the context of the bite, testing of the brain may be required by law (and at your expense). This is because the cat cannot complete the quarantine period.

Rabies is a lethal Lyssavirus virus that causes encephalomyelitis, which attacks the nervous system of mammals. It is spread in saliva, usually through a bite, but it can also be transmitted via an open wound or sore. Carnivores and bats are considered reservoir-host species. Cases in humans have been noted as far back as 1800 BC.

Rabies is a serious zoonotic disease (animal disease that can be passed to humans), with 59,000 people dying of rabies each year, according to the World Health Organization. People can become infected via bites, scratches, and saliva from a rabid animal contacting broken skin.

According to the American Veterinary Medical Association, most animal cases occur in skunks, raccoons, bats, coyotes, and foxes. Cats are the most common domestic animal to be infected, but bats are the most likely overall carrier, says the Centers for Disease Control. Vaccines are available for humans, dogs, cats, ferrets, horses, cattle, and sheep.

Researchers can identify different strains of rabies, i.e. skunk vs. bat vs. raccoon, but all strains can infect cats, dogs, and people.