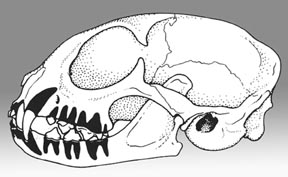 Of the three main types of jaw fracture, that of the mandibular symphysis is the most common. The cats jaw is V-shaped. The center point of the lower jaw (mandible) is called the symphysis, says Barbara Gores, DVM, diplomate, American College of Veterinary Surgeons, with Southwest Veterinary Specialty Center in Tucson, Arizona. The lower jaw is not just one bone, but rather two halves fused together – so the symphysis is a weak point and an easy place to separate.

The second type of fracture also involves the mandible, but further back. It may involve the vertical ramus – the very thin bone in the back of the jaw where all the muscles attach, says Dr. Gores, a specialist in small animal surgery with training in oral surgery.

The third type is of the upper jaw (maxilla) or hard palate (roof of the mouth), and often accompanies High Rise Syndrome – so named as a result of falls from extreme heights, and seen most often in areas populated with high-rise buildings.

The Importance of Teeth
According to Dr. Gores, one of the challenges in veterinary medicine is the lack of cross training in both orthopedic and dental procedures. Surgical textbooks emphasize more traditional orthopedic repairs of stabilizing the bone, while dental textbooks focus on newer orthodontic techniques using the teeth to stabilize the bones, says Gores. Veterinary dentistry as a separate specialty has only existed since the late 1980s, so it is quite a new field.

One mistake of the past was to ignore the teeth. A surgeon might do everything possible to realign the bone so that it looked perfect – but actually end up destroying the blood supply, the teeth and roots in the process. We were taught that perfect realignment of the bone pieces is what restores function, explains Dr. Gores.

With the jaw, thats not necessarily true. The objective is restoration of dental occlusion because thats what really restores jaw function for eating and other functions,says Dr. Gores. You must keep in mind the true function of the bones you are repairing. Different types of repair techniques can be employed in the jaw that would not be used to repair a limb.

Today, there is much more awareness of the importance of teeth. Most of the jaw bone is made up of the tooth roots, says Dr. Gores. Like the roots of plants that anchor soil and prevent erosion, the roots of the teeth anchor the jawbone. Even a fractured tooth can be used efficiently to anchor a jaw fracture repair.

Preservation of teeth involved within the fracture line contributes to proper anatomical alignment and the ultimate stability of the fracture. Extractions, further endodontics and/or restorations can always be performed at a later date as needed, she says. We are practicing less invasive repair methods and striving for normal jaw function, not necessarily perfect alignment of the bone fragments.